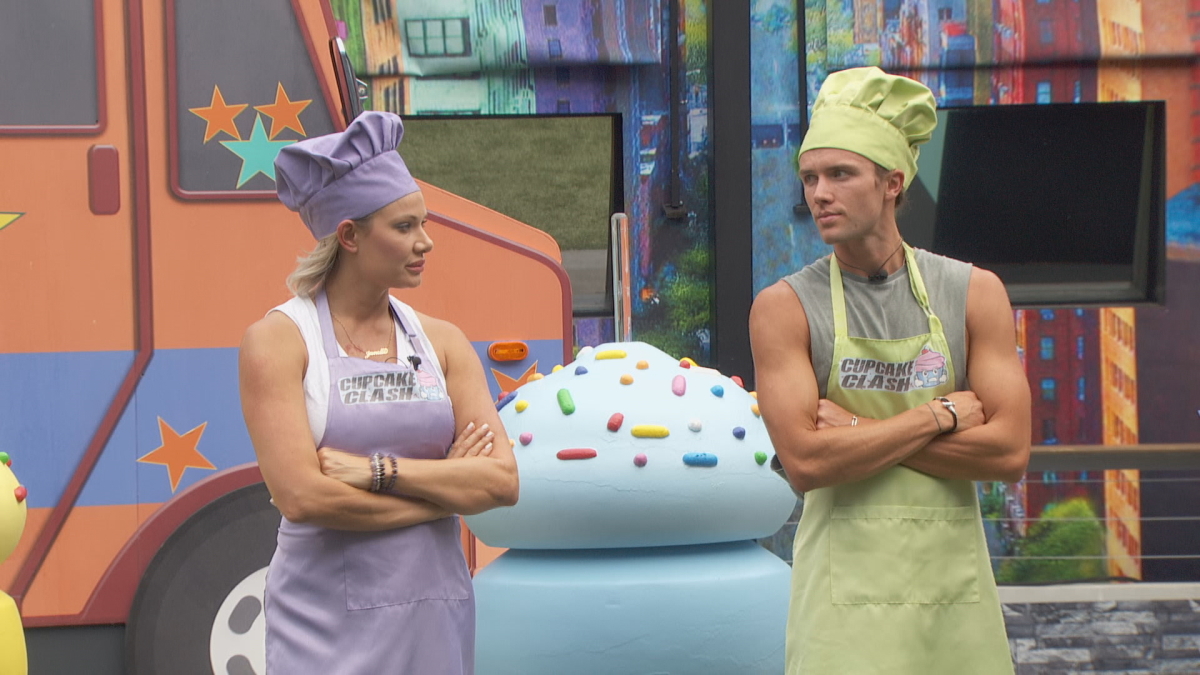 The Big Brother 2020 cast certainly sparked some interesting discussions on the overnight live feeds, including a big one where talk of a vote flip surfaced. Suddenly, fans of Janelle Pierzina were able to see a glimmer of hope.

It all took place during an offshoot of a conversation that Tyler Crispen, Enzo Palumbo, and Cody Calafiore were having after they figured out what Daniele Donato was conspiring to do in the house.

Enzo called it stupid for them to get rid of Janelle on the live feeds. He pointed out that it was Nicole Franzel and Daniele Donato that want Janelle gone, but that Janelle would go after Dani/Nicole.

That was one of several comments that the guys made during their chat in reference to it being a bad game move to evict Janelle this week.

It also echoes what Tyler was saying late on Tuesday night when he expressed regret to the cameras about working to get Janelle out to help other people in the game.

A chat about keeping Janelle Pierzina

At different times on Wednesday evening, Enzo, Tyler, Cody, and Bayleigh Dayton spoke about the benefits of keeping Janelle in the house.

Part of one chat between Enzo and Cody is shared below: 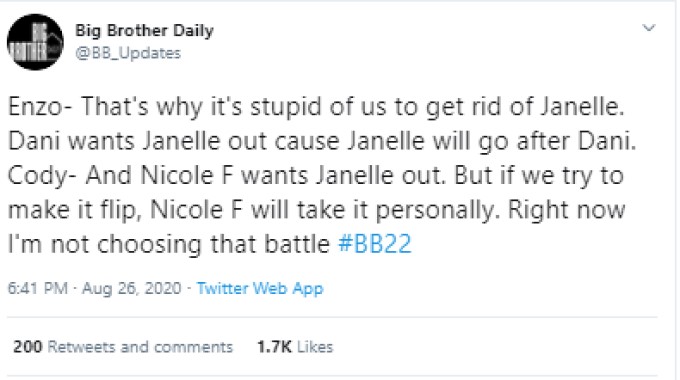 That quote from Cody that ended the chat is what should be focused on. Each time that someone mentioned the benefits of keeping Janelle around, Cody tried to show that now was not the time to flip the vote.

It has long been assumed that Cody Calafiore and Nicole Franzel had a deal in place before they ever walked in the Big Brother house this summer. Though they haven’t always appeared to be on the same page this season, it should not surprise anyone if Cody does everything to help him and Nicole at the same time.

Who is getting evicted by the Big Brother 2020 cast?

There are murmurs about throwing a vote or two at Kaysar in order to place some blame on other people and create some chaos within the BB22 cast. Outside of that, though, it appears that a unanimous vote to evict Janelle is about to take place.

Memphis Garrett has gone on record as being willing to vote to save Janelle (to her), but he has also told his alliances that he is not going to honor that deal. Various other houseguests have also shown tertiary support to Janelle this week, but not enough to risk themselves to save her.

All of this chatter will at least provide some good footage to air ahead of the Eviction Ceremony on Thursday night, especially as the producers try to promote some drama, but the vote appears to still be to send Janelle out the door.

As for all of these conversations, they could be used as ammunition against each other when these primary alliances finally start going after each other.

Before all of these chats took place and before the discussions about Daniele getting outed surfaced, Cody talked with Dani about getting Tyler out soon. Will they abandon that idea? Or will all of these new conversations lead to drama?

Maybe a new power in the house could help shake things up.

Related posts:
Riverdale fans convinced Charles is the video tape stalker after brutal murder of Principal Honey
Brandy And Monica To Face Off In Next ‘Verzuz’ Battle
Popular News
Ellen DeGeneres Addresses Toxic Workplace Allegations On Season Premiere
21/09/2020
Man Utd wonderkid Ramon Calliste, called ‘the next Giggs’, now owns luxury watch business and makes £5m a year – The Sun
26/03/2020
Megan Thee Stallion Addresses Criticism Over Twerking: ‘I Love to Shake My A**’
26/03/2020
Police guard shops to stop coronavirus panic-buyers and enforce social distancing – The Sun
26/03/2020
Coronavirus: Good Morning Britain’s Dr Hilary reveals ‘game-changing’ self-testing kit
26/03/2020
Recent Posts
This website uses cookies to improve your user experience and to provide you with advertisements that are relevant to your interests. By continuing to browse the site you are agreeing to our use of cookies.Ok