I’m A Celebrity… Get Me Out of Here! came to a close yesterday evening and it was Giovanna Fletcher who ITV viewers chose as their winner of the show’s 20th series. With all the 12 celebrities now reunited with their families and returned home, Russell Watson caught up with Charlie and Rachel on BBC Breakfast. However, he was unable to let slide a blunder from Rachel after she mistakenly called his co-star Shane Richie, Shane Russell.

The 12 campmates won the hearts of the nation throughout the process before Giovanna was eventually crowned Queen of the Castle last night.

One person who made a lasting impact was operatic tenor Russell, who was eliminated alongside Jessica Plummer earlier this week.

Russell was seen getting stuck into some of the show’s gruesome trials and became the show’s “camp jukebox” as he vowed to entertain his campmates.

This morning, Russell joined Rachel and Charlie on BBC Breakfast for a debrief of the series – but he couldn’t help but comment on the latter’s small blunder. 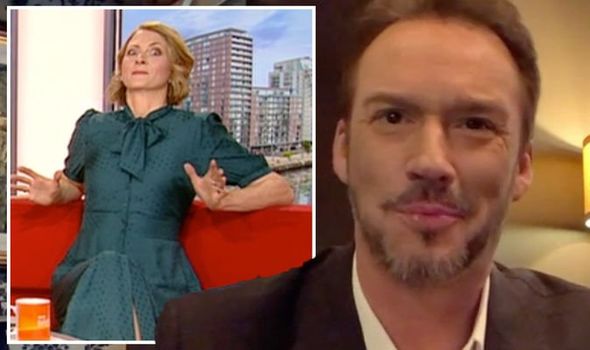 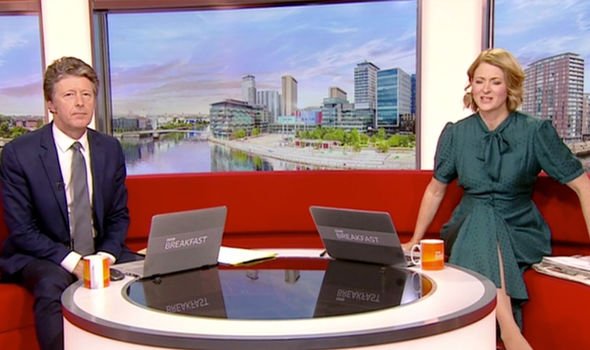 Charlie warned viewers of spoilers: “This is the point where we say, ‘It’s 8:51, listen very carefully, it’s a spoiler alert.’

“If you have not caught up on last night’s TV, you may want to look away and stop listening now.

“After three weeks of gruesome challenges the winner of this year’s I’m A Celebrity has been announced and we’re just about to tell you who that is.

Rachel took over: “So, after facing off competition from the likes of actor Shane Russell and the opera star, Russell Watson…” 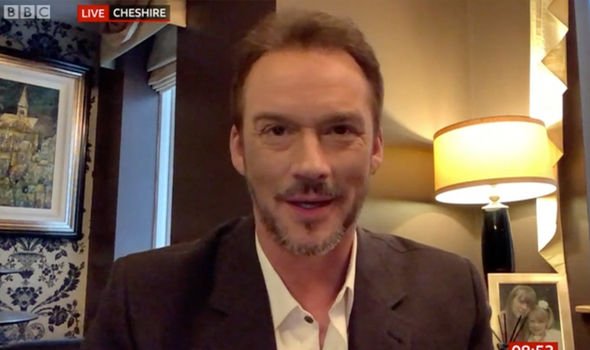 I’m A Celeb: Giovanna wins Queen of the castle

However, Rachel quickly corrected herself after she realised her error, exclaiming: “Shane Richie!”

“We’ll talk to Russell Watson in a moment,” she laughed, “Ultimately, it was the blogger Giovanna Fletcher who claimed the title.

The host linked to a video-tape of some of the most memorable moments from this year’s competition.

But when the hosting duo went on to introduce Russell, he didn’t let Rachel’s error go unnoticed.

“Congratulations to Giovanna, I’m delighted we can speak to Russell now,” Rachel said.

“I have to say, I’d rather be sitting where you are right now than back in the castle interviewing you there – is it nice to be home?” she asked.

“It’s lovely to be home,” he said – before going on to imitate his co-star Shane in a faux cockney accent.

He continued: “I reckon Shane will be really pleased with being called Shane Russell.”

The hosts laughed as Russell added in Shane’s voice: “What are you talking about?” before the hosts quickly moved on.

Russell detailed what it was like for the campmates to be able to get close to each other as they remained in a bubble throughout their time on the show.

“That was the strangest thing,” he admitted, “It took two or three days to realise you could get close to weren’t wearing masks.

“For that couple of weeks, such a wonderfully liberating feeling.”

And speaking on what it was like after coming out, he added: “Everyone’s got masks on and the world just seems a totally different place.”

BBC Breakfast airs daily from 6am on BBC One and I’m A Celebrity… Get Me Out of Here! can be streamed in full on the ITV Hub.

Related posts:
I'm A Celeb fans spot the 'moment' Giovanna Fletcher won the show when she brought S Club 7's 'Reach' as her luxury item
Mum-of-22 Sue Radford wades through Xmas presents pile as she starts wrapping
Popular News
Trump to hold farewell event at Andrews before leaving DC
16/01/2021
Man Utd wonderkid Ramon Calliste, called ‘the next Giggs’, now owns luxury watch business and makes £5m a year – The Sun
26/03/2020
Megan Thee Stallion Addresses Criticism Over Twerking: ‘I Love to Shake My A**’
26/03/2020
Police guard shops to stop coronavirus panic-buyers and enforce social distancing – The Sun
26/03/2020
Coronavirus: Good Morning Britain’s Dr Hilary reveals ‘game-changing’ self-testing kit
26/03/2020
Recent Posts
This website uses cookies to improve your user experience and to provide you with advertisements that are relevant to your interests. By continuing to browse the site you are agreeing to our use of cookies.Ok