BBC Breakfast viewers called out Robert Jenrick MP for wrongly confirming households and individuals can mix, outdoors, during the new lockdown which is set to come into force on Thursday for England. Louise Minchin asked the politician to clarify, which he did, before backtracking and giving the correct advice.

Minchin began: “There seems to be some confusion about grass root sports, various things going on.

“Let’s talk about tennis and gold – are they allowed?”

“They won’t be allowed for the period these tougher national measures,” Jenrick replied. “I appreciate the arguments made; they’re outdoors, they’re in small groups, sometimes with just one other person.

“But for simplicity and clarity, the regulations that will be laid today and voted on tomorrow in the House of Commons, we will ask people to refrain from those sports until December 2. 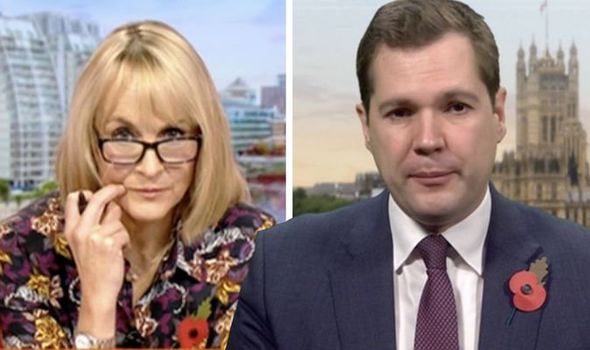 “We hope at that point we will be able to exit these national measures if we’ve made sufficient progress and then in parts of the country people will be able to return to sports like that,” he added.

“Okay, for simplicity and clarity, Michael Gove MP got this wrong – he is apologising this morning – outdoor leisure facilities including tennis courts and golf courses will be closed from Thursday,” Minchin said.

“You’re trying to make everybody abide by the rules and Michael Gove MP doesn’t get them right!”

“The regulations will be available later today, they will be voted on in Parliament tomorrow, they will be very detailed Q&A’s on gov.uk and we will pass that out to local councils,” Jenrick explained.

“This is a fast-moving situation, the decision was made over the weekend, we’ve worked at pace through the many questions people may have, and now we want to put the clearest information out into the public domain.”

“What about swimming pools?” The presenter continued.

“Indoor and outdoor leisure will be closed until December 2 – I appreciate that will be disappointing to people,” Jenrick remarked.

“There are some differences to the national measures we had in March and April which will benefit people; for example you’re able to do unlimited outdoor exercise during this period.

“So we’re not going back to the time where there was only one walk a day for a limited period, you can go out with your own household, or your own household plus one person and walk the dog, go for a run, go for a walk around the town or city you live.

Minchin asked: “I think I heard you say, outside you can be one household plus one other person – is that what you meant and is that right?”

“Okay, so a family could go for a walk, for example, with a friend?” The presenter continued to probe.

“Yes,” the MP confirmed and Minchin added: “So four people and one person? That’s right?”

“Yes, so you can go out in your own household or with one other person,” the politician said, making a U-turn on his initial comment.

Those watching at home called out the guest for his confusing and partially wrong advice.

“4+1 eh?  another person who is confused by the rules?” One asked on Twitter.

Someone else wrote: “And again he got it wrong!! You can only meet one on one with another household NOT your household plus one other. No wonder people don’t stick to the rules.”

“Get the advice right then @RobertJenrick! Please tell your viewers he got that meeting one other from a different household wrong! It’s just one to one!” Another mentioned.

A fourth commented: “@RobertJenrick looked very unsure of his answer to @louiseminchin question on who we can meet for a walk.”

BBC Breakfast airs everyday at 6am on BBC One.

Related posts:
Use BT, Virgin Media or Sky? Speed up your broadband for free ahead of UK lockdown
Piers Morgan and Charlotte Hawkins forced apart by Susanna after ‘off-air’ GMB ‘tiff’
Popular News
Melania Trump Debuts Blonde Hair As She Inspects White House X-Mas Tree After Blasting Holiday Traditions
23/11/2020
Man Utd wonderkid Ramon Calliste, called ‘the next Giggs’, now owns luxury watch business and makes £5m a year – The Sun
26/03/2020
Megan Thee Stallion Addresses Criticism Over Twerking: ‘I Love to Shake My A**’
26/03/2020
Police guard shops to stop coronavirus panic-buyers and enforce social distancing – The Sun
26/03/2020
Coronavirus: Good Morning Britain’s Dr Hilary reveals ‘game-changing’ self-testing kit
26/03/2020
Recent Posts
This website uses cookies to improve your user experience and to provide you with advertisements that are relevant to your interests. By continuing to browse the site you are agreeing to our use of cookies.Ok