‘Babylon’ and the Case of the Missing Bob Haircut

Margot Robbie’s 1920s silent-screen star wears her locks long and frizzy — and that’s by design, as the director Damien Chazelle and hairstylist explain. 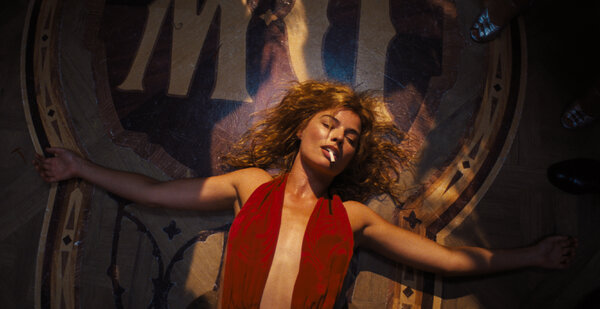 At the start of the epic “Babylon,” Margot Robbie’s character, a rising silent-film star named Nellie LaRoy, quite literally crashes into a Hollywood bigwig’s party — her car hits a statue — and then proceeds to take over the dance floor, her voluminous hair whipping back and forth as she headbangs to a jazz score. In a sea of the kind of bobbed hairstyles usually associated with the 1920s, Nellie’s long frizzy mane stands out as Robbie wields it almost like another appendage.

The hairstylist Jaime Leigh McIntosh was terrified. “I will be honest, it was freaking me out,” she said in a recent interview via video. “I was just like, I’m going to be stoned in the village square. My fellow hair stylists are going to be like, ‘That’s not period correct.’”

But McIntosh and the film’s writer-director, Damien Chazelle, also made sure that as anomalous and modern as Nellie’s hair might seem for the 1920s, there was historical precedent for it. What results is a look that evokes both Clara Bow and Janis Joplin with a bit of the Bible’s Samson thrown in. “I wanted it to be like someone just took her from the woods,” Chazelle said.

The wild Nellie symbolizes the ethos of the sprawling movie, which takes the classic narrative of a starry-eyed ingénue and adds a layer of excess and scatological humor. Chazelle was intent on creating a portrait of the 1920s that didn’t look like the one audiences knew from, say, “Great Gatsby” adaptations. “He was just like, ‘There’s got to be another ’20s out there,’” McIntosh recalled. “‘We just keep kind of regurgitating the same looks and the same fashion, and there must have been other things happening.’”

In the months before shooting began, she and Chazelle sent reference photos back and forth. He gave her a list of films and documentaries to watch, but the production team was also on a hunt for images of people not filtered through a movie lens. She and the makeup artist Heba Thorisdottir leafed through the book “Least Wanted: A Century of American Mugshots” for examples of what unvarnished people of the era might look like. Chazelle in particular was drawn to images from portrait studios. “Like Man Ray portraits, but less famous than that,” he said.

“There’s only so much of what you would call documentary photography, candid camera stuff, but there’s a lot of really out-there, wild, transgressive studio photography that wound up inspiring a lot of the costumes, too, where people would put on crazy, crazy stuff that even the pre-Code movies of the time would never allow you to put on,” Chazelle said, referring to the Hays Code, which imposed morality restrictions on film starting in the 1930s. It was not just the hairstyles that caught his eye, he added, but also the “risqué-ness that was accepted in the wardrobe both of men and women at the time.”

Anything that bucked conventional wisdom about the time sparked inspiration. McIntosh cited footage she found of women at a long hair competition and an image of Miss Philadelphia 1924, her hair a mess of frizz around her face before falling into long ringlets. Chazelle looked to the silent film star Clara Bow — “Margot and I both loved just how bird’s nest-y Clara Bow’s hair could get,” he said — but also the less well known Lili Damita, who sometimes appeared with a big curly mop. “I just kept coming back to photos I would find of women of the time with long hair, with wild long hair,” Chazelle said. “I just couldn’t get over those photos because of how un-1920s they felt. They felt so counter to expectations.”

As Chazelle and McIntosh found — and as Rachael Gibson, who bills herself as the Hair Historian — confirmed, it was a misconception to think that all women in the 1920s wore their hair short. “We just kind of think, ‘Oh everyone had this hair,’” Gibson said. “But that’s not the reality.”

Still, the images Gibson has seen of Nellie struck her as incongruous. (At the time of the interview, she had not yet seen the movie.) “It’s not superlong and it’s kind of got this natural wave to it, and it’s really unlike anything else that we associate with that era,” she said.

That too was the point. One of the words Chazelle kept using, McIntosh said, was “timeless.” As he identified Nellie’s historical counterparts, Chazelle also kept in mind “spirits” he wanted her to evoke. Those included the musicians Joplin and Courtney Love and the actresses Jean Harlow and Julie Christie. Chazelle felt Nellie needed to “always have a foot in a different era as though she sort of came from the future,” and used ’80s punk culture as a reference, too.

To determine the specific length and style, McIntosh and Chazelle went through multiple rounds of tests, putting Robbie in various wigs to see not just how they looked but eventually how they moved as she walked and danced. “I never expected it to be as complicated as it wound up being,” Chazelle said. “We locked it down right in the nick of time.”

Once they settled on her long locks, Robert Pickens built a wig that could both withstand Nellie’s thrashing and convey the “grittiness” of the era. Without air conditioning, Pickens said, “people are sweating. To communicate all that through hair we went with a really fine texture.”

Going into filming, McIntosh was still nervous. It wasn’t until she saw Robbie shoot the opening dance number that she suddenly realized, “‘It all makes complete sense. This is genius.’ It took me a while. I was a little stubborn but I got there.”

Later in the film, Nellie’s hair is cut into a more recognizably period finger-wave bob as she tries to rehabilitate her flailing career by fitting in with high society. It looks awkward. Her power has been sapped from her, almost like Samson’s when his hair was cut.

“I was just like, ‘Oh, my God, what have we done to her?’” McIntosh said. “Which is so funny because normally you’d be like, ‘Oh, wow, look at this beautiful finger wave, but because it was on Nellie it was so wrong.”