This drama about a young single mother and a terminally ill daughter avoids sentimentalism but indulges heavily in dourness. 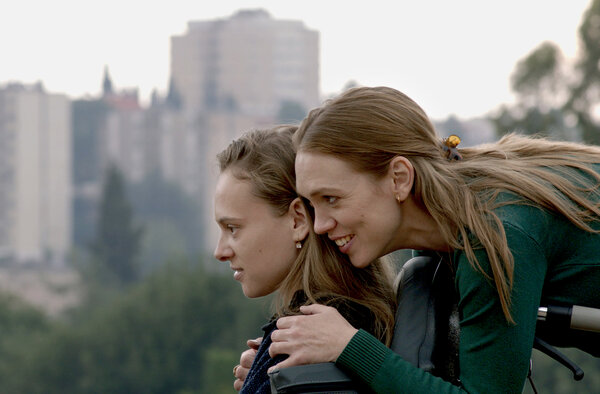 In the opening moments of “Asia,” a young-looking woman dances and downs shots in a crowded, neon-lit bar. You might be surprised when, in the next scene, she’s revealed as the maternal half of Ruthy Pribar’s mother-daughter drama. A 35-year-old Russian nurse in Jerusalem, Asia (Alena Yiv) was in her teens when she had Vika (Shira Haas). Now that Vika is a teenager, and eager to experiment with boys and drugs, Asia struggles to discipline her while seeking escapes of her own in hookups and drinks after long work shifts. Adding urgency to Vika’s adolescent rebellion is her fast-progressing degenerative disease, which makes her desperate to experience life’s hedonistic pleasures.

“Asia” follows the contortions of Asia and Vika’s relationship as the latter’s health deteriorates rapidly. Pribar directs with a delicate touch, with little music and a lens that’s attentive to faces and gazes. But if the film avoids the typical sentimentalism of dramas about terminal illness, it indulges heavily in dourness. Asia and Vika struggle to emerge as full-fleshed characters from the movie’s dull, blue-grey frames, while the script rushes through provocative plot turns in its bleak procession toward a wrenching conclusion.

The most troubling of these narrative twists involves Gabi (Tamir Mula), a charming Arab nurse-aid whom Asia hires to take care of Vika. In a misguided bid to fulfill her daughter’s desires, Asia makes Gabi a thoroughly indecent proposal — one that, in a more daring film, might have cued an exploration of the ethical quandaries that caregiving often involves. But “Asia” downplays the transgression and its emotional ramifications, in what feels like a disservice to Vika’s assertion that she deserves more than our pity.

Asia
Not rated. In Hebrew and Russian, with subtitles. Running time: 1 hour 25 minutes. In theaters.