‘All Quiet on the Western Front’ Leads BAFTA Nominees

The German-language movie received 14 nods and will compete for best film against the likes of “Everything Everywhere All at Once” and “The Banshees of Inisherin.” 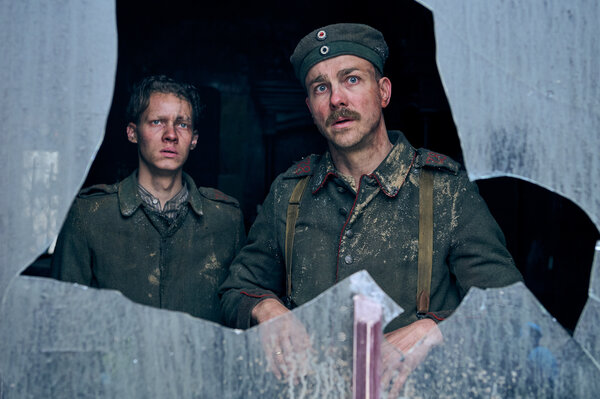 “All Quiet on the Western Front,” a German-language movie set on the battlefields of World War I, emerged on Thursday as the surprise front-runner for this year’s British Academy Film Awards, Britain’s equivalent of the Oscars.

“All Quiet,” a Netflix-backed movie about the futility of war, secured 14 nominations for the awards, commonly known as the BAFTAs. Those included best film, where it is up against four higher-profile titles including “Everything Everywhere All at Once,” a sci-fi adventure starring Michelle Yeoh as a laundromat owner who traverses universes; and “The Banshees of Inisherin,” Martin McDonagh’s dark comedy about two friends who fall out while living on a small island, both of which received a total of 10 nominations.

On its release in Britain, critics gave the Edward Berger-directed “All Quiet” rave reviews. Kevin Maher, writing in The Times of London, said that the movie was “more visceral, more spectacular and certainly more harrowing” than any previous adaptation of Erich Maria Remarque’s 1929 novel of the same title. “See it on the biggest screen possible. Then watch it again on Netflix,” Mr. Maher added.

American critics were less effusive. Ben Kenigsberg, reviewing the movie for The New York Times, said that it “aims to pummel you with ceaseless brutality, and it’s hard not to be rattled by that.”

Steven Spielberg Gets Personal in ‘The Fabelmans’

The director’s latest movie, starring Michelle Williams, focuses on Sammy Fabelman, a budding filmmaker who is a lot like Spielberg himself.

The 14 nods for “All Quiet” is the highest number of BAFTA nominations for a movie not in the English language, tied with Ang Lee’s 2000 action film “Crouching Tiger, Hidden Dragon,” according to BAFTA officials.

Most of the nominations for “All Quiet” are in technical categories. But Berger also secured a best director nomination. He will compete for that award against the directors of “Banshees of Inisherin” (McDonagh), “Tár”(Field) and “Everything Everywhere All At Once” (Dan Kwan and Daniel Scheinert). Park Chan-wook, the director of “Decision to Leave,” about a policeman who falls in love with a suspect, also secured a best director nod, as did Gina Prince-Bythewood for “The Woman King,” about the women soldiers of the precolonial Kingdom of Dahomey in West Africa. Prince-Bythewood is the only female director among the nominees.

There was one upset among the best director nominees: Steven Spielberg didn’t get a nod for “The Fabelmans,” his semi-autobiographical tale of a budding filmmaker coping with a fractious home life, which won him best director at last week’s Golden Globes.

The BAFTA nominations, which were announced in a YouTube broadcast, have long been seen as a bellwether for the Oscars because there is overlap between their voting bodies. Nominations for this year’s Academy Awards are scheduled to be unveiled on Tuesday and “All Quiet on the Western Front” has been tipped as a potential nominee in the best picture category.

In recent years, the BAFTA organizers has made efforts to widen the diversity of nominees, including requiring voters to watch a variety of movies before they can make their selections.

Last year, that led to several unexpected nominees in the best acting categories, many from low-budget British movies. But there are fewer upsets this year. The best actress nominees include Blanchett for “Tár,” Viola Davis for “The Woman King,” Yeoh for “Everything Everywhere All at Once” and Emma Thompson for her role in “Good Luck to You, Leo Grande,” in which she plays a widow who hires a prostitute.

They will compete for that prize against Danielle Deadwyler for her role as Emmett Till’s mother in “Till” and Ana de Armas for “Blonde,” in which she plays Marilyn Monroe.

The best actor category sees Austin Butler, the Golden Globe-winning star of “Elvis,” up against Colin Farrell, for his role in “The Banshees of Inisherin,” and Brendan Fraser, for his transformation into an obese, grief-stricken writing instructor in “The Whale.” Also nominated are the rising Irish star Paul Mescal, for his role as a young father taking his daughter on holiday in “Aftersun,” Daryl McCormack, for playing the prostitute in “Good Luck to You, Leo Grande,” and Bill Nighy, for “Living,” about a bureaucrat given a life-changing medical diagnosis.

Whether the nominations for “All Quiet” translate into trophies will be revealed on Feb. 19, when the BAFTA winners are scheduled to be announced in a ceremony at the Royal Festival Hall in London.