A Film Tries to Make a Difference for Domestic Violence Survivors

In 2013, Tanisha Davis, a 26-year-old woman from Rochester, N.Y., was sentenced to 14 years in prison for killing her boyfriend, at whose hands she suffered, she said, nearly seven years of abuse, including choking, death threats and a beating on the night he died. The judge agreed that she was a victim of domestic violence but said her response did not merit leniency. “You handled the situation all wrong,” he told her. “You could have left.”

In 2021, because of a new law that allows survivors of domestic violence more nuanced consideration in the courts, the same judge released Davis, thanks in part to a documentary that helped frame her case.

It’s not uncommon for documentary projects to have an impact on legal proceedings, once they’ve found an audience and built public attention. But the film that helped Davis, “And So I Stayed,” was not yet released — it wasn’t even finished — when the filmmakers, Natalie Pattillo and Daniel A. Nelson, put together a short video for the court, describing her life.

“You could see the strength of the ties she had to her family and the strength of the support she would have” if she were released, said Angela N. Ellis, one of her lawyers. The prosecutor and judge both mentioned watching the footage when they agreed, in March, to set her free.

For the filmmakers, it was an unexpectedly bright ending to an often heartbreaking and troubling film. “And So I Stayed,” which will have its premiere Saturday at the Brooklyn Film Festival (viewable online through June 13), is personal for Pattillo, who is a survivor herself and whose sister was killed by a boyfriend in 2010. The documentary grew out of her thesis project at Columbia Journalism School, where she met Nelson, her co-director. 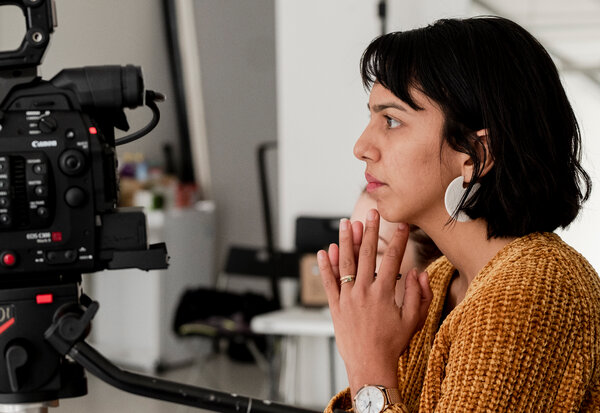 “I didn’t realize how common it was, the gravity of women being incarcerated for defending themselves or their children,” Pattillo said. “Once I found out, I couldn’t stop reporting,” in an effort to show just how misunderstood, and punitive, these cases are within the justice system.

The film’s first focus was Kim Dadou Brown, who served 17 years in prison for killing her abusive boyfriend. She became an advocate, traveling to Albany to needle New York lawmakers about the Domestic Violence Survivors Justice Act, the long-simmering legislation that eventually helped free Davis. Introduced in 2011, it was finally passed in 2019, after Democrats flipped the State Senate.

The act is among the few laws in the country that grant judges more leniency in sentencing domestic violence victims who commit crimes against their abusers. It follows a growing, research-backed understanding of the patterns of abusive relationships, and the unique hold they have on people within them.

“Leaving is the hardest part,” and the most dangerous, Dadou Brown said. “I thought that all men hit, and so I stayed with mine, so I knew which way the blows would come.”

After Dadou Brown, a Rochester native and former health-care worker, was paroled in 2008, she volunteered with survivors and crisscrossed the state for rallies — even when money was tight because her felony status made jobs hard to find, she said. With 17 earrings (one for each year of her incarceration) and her signature false eyelashes, “she’s just a force,” Pattillo said. “It’s pure tenacity. That’s Kim.”

When the bill passed, there was elation among its supporters and the filmmakers. But they kept their cameras rolling.

One case that was considered a surefire test of the act was that of Nicole Addimando, a young mother of two in Poughkeepsie, N.Y., who in 2017 fatally shot Christopher Grover, her live-in boyfriend and the children’s father. The film includes police camera footage of that night, when she was found disoriented and driving around in the wee hours, her 4- and 2-year-olds in the back seat.

“I felt like we failed her,” said Dadou Brown, who was at the sentencing.

In the film, Addimando is heard mostly as a voice on the phone from prison; in one call, her mother tries to console her that at least she’s alive, that she escaped the abuse. “I’m still not free,” she replies, weeping.

Though there are no nationwide statistics on the number of women incarcerated after defending themselves against abusers, federal research suggests that about half of the women in prison have experienced past physical abuse or sexual violence, a majority from romantic partners. Black women are disproportionately victimized through both intimate partner violence and the justice system: They are the most likely to be killed by a romantic partner and more likely to end up in prison, according to Bernadine Waller, a scholar at Adelphi University.

In bringing stories like these to the screen, said Nelson, the filmmaker, their aim was not to dispute who pulled a trigger, but to contextualize those convicted. “The legal system forces you to create the perfect victim,” he said, “and a prosecutor will do everything in their power to characterize a survivor into not fitting into that box.” (In Addimando’s case, the judge said she “reluctantly consented” to the sexual abuse.)

Garrard Beeney, a lawyer for Addimando, who is awaiting a decision on her appeal, said the documentary’s examination of the way the judicial system treats survivors is “a necessary, but I also think, not sufficient step,” in changing the process. Police, prosecutors, and judges have to be educated on how to think about domestic violence, he said. “We need that kind of retraining more immediately than a gradual process of understanding.”

For Pattillo, who had two of her three children while making the film, some moments felt overwhelmingly raw. “There’s survivor’s guilt, always, when you’re dealing with trauma,” she said, adding, in reference to Addimando, “Why did I get to be OK and not Nikki? Why do her kids not get to be tucked in by her every night?”

But it was also “very healing,” she added, “to have a hand in making sure the survivors feel seen and heard and believed through this film.”

It originally ended on a dark note, at a vigil for Addimando. Then came the Davis case. The filmmakers were there on the day she was released from Bedford Hills Correctional Facility. Reacclimating to life outside — during a pandemic — is still challenging, Davis said last week. But she wanted her story told as a warning for victims, and a beacon. The filmmakers plan to make the documentary available to those in the legal system — “a tool kit,” Nelson said, on how to employ the new law.