Home » Lifestyle » Who's top Hugh? Laurie and Grant have been posh peas in a pod

Who's top Hugh? Laurie and Grant have been posh peas in a pod

Who’s top Hugh? They’re both starring as TV rogues… but from the Oxbridge days to their troubled love lives, Laurie and Grant have been posh peas in a pod

They’re both dashing, thoroughly middle-class and with careers that have followed very similar paths.

The pair are currently starring in gripping TV dramas, playing decidedly dodgy characters: Grant as a murder suspect in The Undoing and Laurie as a corrupt politician in Roadkill.

Here CLAUDIA CONNELL brings you a Hugh’s Hugh of the two men who have us glued to our screens, and ask… Hugh comes out on top? 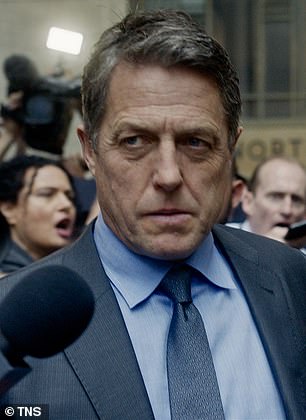 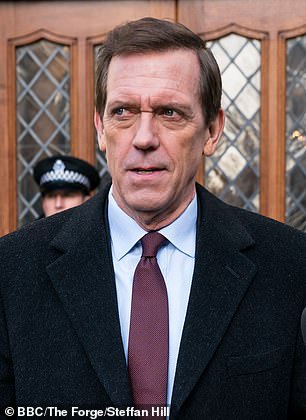 Hugh Grant, 60, (left) and Hugh Laurie, 61, (right) are both dashing, thoroughly middle-class and with careers that have followed very similar paths – but Hugh comes out on top?

Hugh Laurie: After leaving Eton (where fees are now £42,000 a year) he studied archaeology and anthropology at Selwyn College, Cambridge.

Just like his father —who won an Olympic Gold medal — Hugh took up rowing, competing in the 1980 Boat Race where the crew lost to Oxford.

He joined the famous Footlights Dramatic Club, meeting comedy partner Stephen Fry, and graduated with a third-class honours degree. He later admitted he was only there for the rowing.

Hugh Grant: After graduating from £21,000- a-year Latymer Upper School in West London (which he attended on a scholarship) he studied English Literature at New College, Oxford.

He joined the Dramatic Society and went on to graduate with a 2:1 honours.

He recently returned to the college to give a talk, where he took part in a traditional drinking game where he supped alcohol from a shoe.

Hugh’s The Winner? Hugh G, with his more impressive degree. 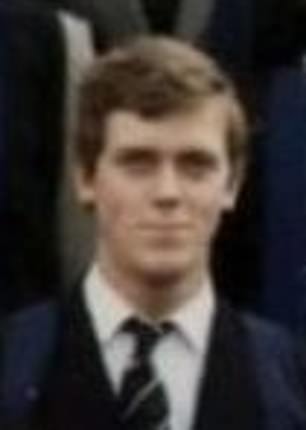 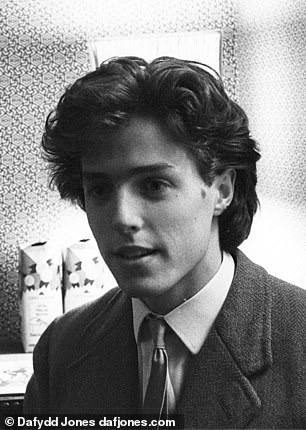 The couple have three children: Charlie, 32, Bill, 29, and Rebecca 27. However, their 31-year marriage has not been without issues.

In 1997, Hugh had an affair with director Audrey Cooke, while filming movie The Place Of Lions. Jo forgave him.

When he did U.S. drama House, he spent ten months a year in LA for eight years. He said: ‘I wouldn’t say doing the series has made my marriage any easier.’

Hugh Grant: He waited until he was 57 to get married. He had dated Liz Hurley for 13 years during which time he was arrested for lewd conduct after being caught with a prostitute.

In 2011, he had a relationship with actress Tinglan Hong by whom he has two of his five children: Tabitha, nine, and Felix, seven.

Hugh married Swedish TV producerAnna Eberstein in May 2018. The couple have three children: John, eight, plus an unnamed four-year-old daughter and two-year-old son.

Hugh’s the winner? Hugh L for reaching his Pearl anniversary.

The battle of the britches

Hugh Laurie: He first pulled on tights and knickerbockers in 1987 to play the dim-witted Prince Regent in Blackadder III. In Sense And Sensibility he played the bad-tempered Mr Palmer.

Hugh Grant: Like any foppish English actor, he’s appeared in many a period drama. He played an aristocrat struggling with his sexuality in the 1987 film Maurice, and Lord Byron the following year in Rowing With The Wind.

But it was in Sense And Sensibility in 1995 that Hugh gave his best performance in britches.

He starred as the bumbling Edward Ferrars who longed to be with Elinor Dashwood but was already promised to another.

Hugh’s the winner? Hugh G. The handsome face, floppy hair and clipped accent means he was born to play toffs in britches. 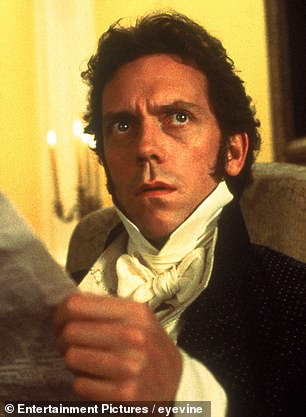 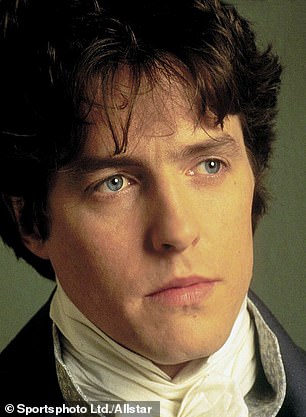 Hugh Laurie (left) first pulled on tights and knickerbockers in 1987 to play the dim-witted Prince Regent in Blackadder III. Hugh Grant (right) played an aristocrat struggling with his sexuality in the 1987 film Maurice

Hugh Laurie: Estimated fortune £40million. House netted him £5million a series, making him one of the highest paid actors on TV.

His main home is a four-storey Victorian house in London’s Belsize Park worth around £5million.

The ten movies in which he was leading man have taken £980million. He invested his earnings in property and owns three homes in London alone, worth around £30 million.

Hugh’s the winner? Hugh G. He’s a chap with a tidy fortune.

Hugh Laurie: He began playing villains in children’s movies such as puppy thief Jasper in 101 Dalmatians.

But when offered the part of arms dealer Richard Roper in the BBC adaptation of John le Carre’s The Night Manager, he said it was the role he’d been waiting to play all his life.

Hugh Grant: He started out playing romantic leads but admits he prefers playing the bad guy: ‘Dishy leading man is quite a thankless task.’

In Paddington 2 he played Phoenix Buchanan, a washed-up actor who framed Paddington for robbery. He also played Fletcher, a sleazy private investigator in 2019’s Guy Ritchie film The Gentleman.

Hugh’s the winner? Hugh L for terrifying us as Roper. 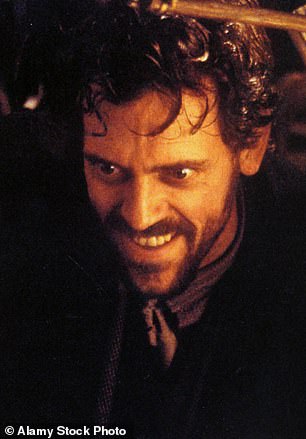 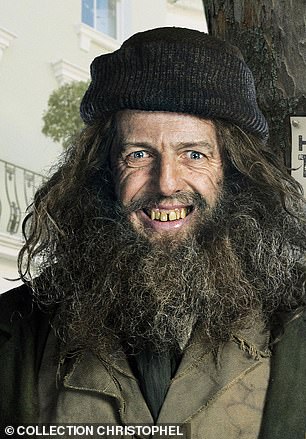 There’s only one doctor in the house

Hugh Grant: In The Undoing, currently on Sky Atlantic and Now TV, he plays Dr Jonathan Fraser, an English cancer specialist who appears to have the perfect life with his wife Grace, played by Nicole Kidman.

But when a mum at their son’s school is murdered, Jonathan is the prime suspect, having had a secret affair with the woman.

Just two episodes in, it has won rave reviews. The show has also attracted 1.7million viewers — huge for a satellite channel — and is on course to be Sky Atlantic’s most viewed series since the acclaimed Chernobyl.

Hugh Laurie: When he auditioned for the lead role in House, the director Bryan Singer had no idea Hugh was British because his American accent was so convincing.

House ran for eight years and was shown here on Sky One. As Dr Gregory House, Laurie played a brilliant but flawed physician who headed a team of diagnosticians.

At its peak the show attracted 20million viewers in the U.S. and won dozens of major awards. But Hugh later revealed he’d struggled with the intense schedule, saying: ‘I had some pretty bleak times, dark days when it seemed like there was no escape.’

Hugh’s The Winner? Hugh L. House was a career-defining role that was sold to a whopping 66 countries. 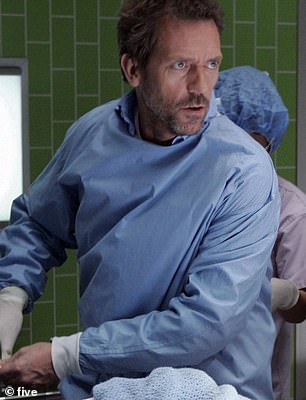 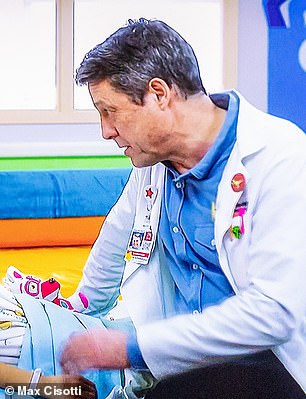 Hugh Laurie: Hugh met Emma Thompson when they were both members of Cambridge Footlights and dated for a year.

A smitten Hugh said of his former sweetheart: ‘Watching Emma was like watching the sun or wind or some other elemental force. Her talent, even then, was inescapable.’

Emma was less poetic: ‘He is one of those rare people who manages to be lugubriously sexy, like a well-hung eel.’

The pair have appeared on screen together three times — in British comedy Peter’s Friends, Sense And Sensibility and another comedy Maybe Baby, about a couple struggling to conceive.

Hugh Grant: Hugh has also starred with Emma in three films: Sense And Sensibility, as brother and sister in Love Actually, and in Merchant Ivory film The Remains Of The Day.

Hugh has described Emma as ‘clever, funny, mad as a chair’. 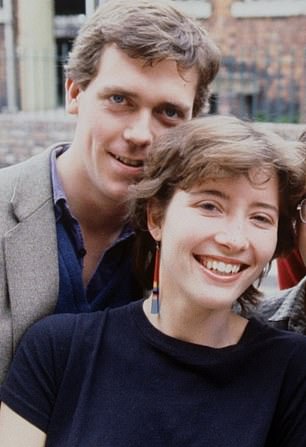 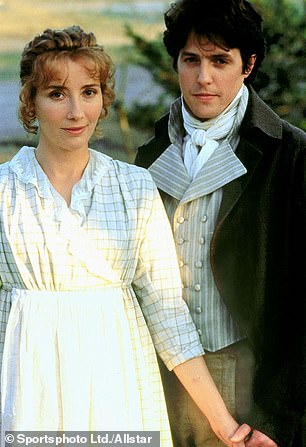 Hugh Laurie met Emma Thompson (together left) when they were both members of Cambridge Footlights and dated for a year. Hugh Grant has also starred with Emma in three films (together right)

Going for a gong

He also picked up a Golden Globe for The Night Manager. Received an OBE in 2007 for his services to drama and in 2018 he was made a CBE.

Hugh Grant: Won a Golden Globe and BAFTA for Four Weddings And A Funeral.

Hugh’s the winner: Hugh L — a bigger haul of awards and honoured by Her Majesty.

Hugh Laurie: Roadkill’s Tory minister Peter Lawrence is corrupt, a serial cheat and the father to at least one illegitimate child.

Yet he has his sights set on becoming Prime Minister, if only he can be sure his many skeletons stay in the closet.

Written by David Hare, the series has received mixed reviews and is attracting an audience of 3.6milllion on BBC1.

He says his character has ‘charm and confidence, a kind of fearlessness, a refusal to apologise, a refusal to back down. These are things people find attractive in politicians.’ 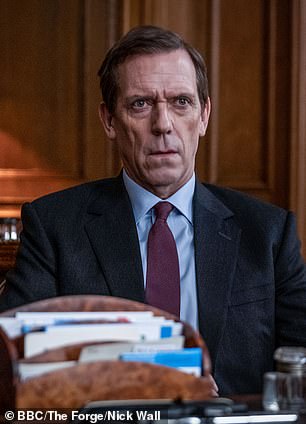 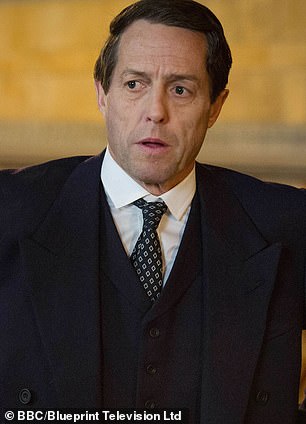 Hugh Grant: In 2018 he portrayed disgraced former Liberal leader Jeremy Thorpe, who was accused of plotting the murder of his male lover in the Seventies.

The series, A Very British Scandal, was widely thought to be one of his best performances and averaged 4.6million viewers on BBC1.

Hugh said of the role: ‘He was a completely despicable human being but it was also important to make people kind of like him too… you have to love them as you might do a member of your family.’

Hugh’s the winner? Hugh G for his pitch-perfect portrayal of

AND THE OVERALL WINNER IS… Hugh Laurie