Who is billionaire heiress and 'Mrs Sunak', Akshata Murthy?

Will Mrs Sunak be Downing Street’s next ‘first lady’? Former fashion designer and billionaire heiress to her father’s IT empire Akshata Murthy, who faced a backlash over her tax affairs, is ‘richer than the King’

As former Chancellor Rishi Sunak looks set to win the Conservative Party leadership race and become the next prime minister, 10 Downing Street will welcome its third new family in as many months.

Sunak, 42, his wife Akshata Murthy, also 42, and their daughters Krishna and Anoushka will be the first Hindu family to occupy the prime ministerial home if his leadership bid is successful.

While Sunak has had something of a meteoric rise in the seven years since he first became an MP to now look set for the top job, Akshata, who is estimated to be worth around £350 million, is poised to become the UK’s ‘first lady’ with her own fortune – and a chic wardrobe to boot.

And, having faced scrutiny for her non-dom tax status in the last year, she is no stranger to the attention that comes with being the prime minister’s wife.

The billionaire heiress is the daughter of Indian IT mogul Narayana Murthy – and she currently owns a £430 million stake in her father’s business, making her wealthier than the King. 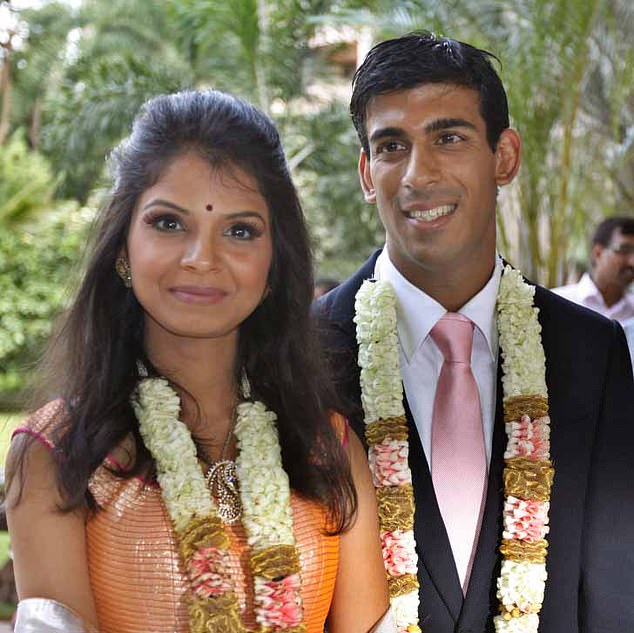 Akshata Murthy, 42 (pictured) has been married to Rishi Sunak, 42, since 2009 after the pair met at Stanford University. The billionaire heiress looks set to move into 10 Downing Street this week as her husband races ahead in the Conservative Party leadership contest 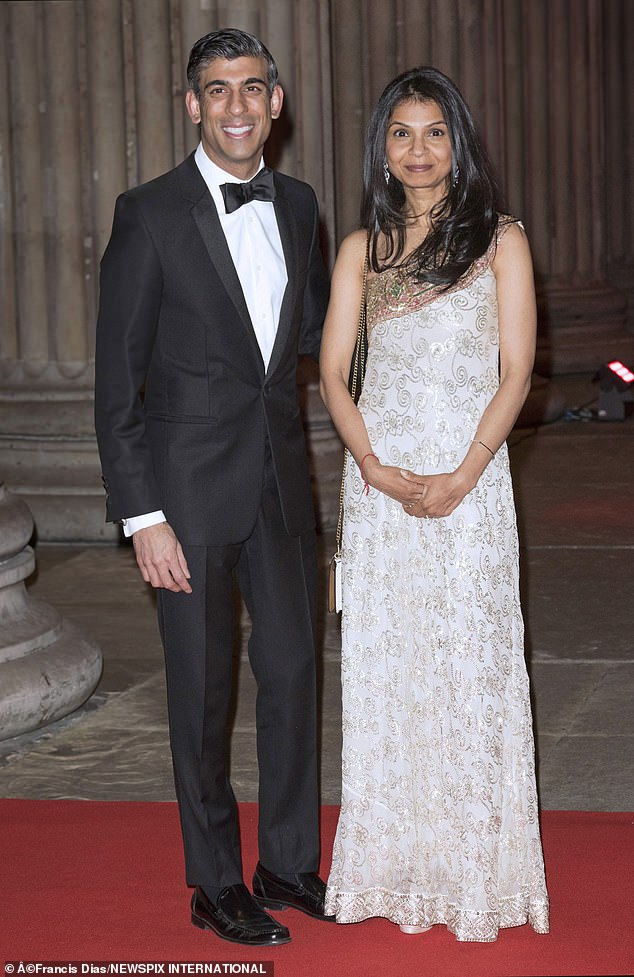 Rishi Sunak and Akshata Murthy (pictured) have a combined fortune of £730 million, according to the Sunday Times Rich List 2022 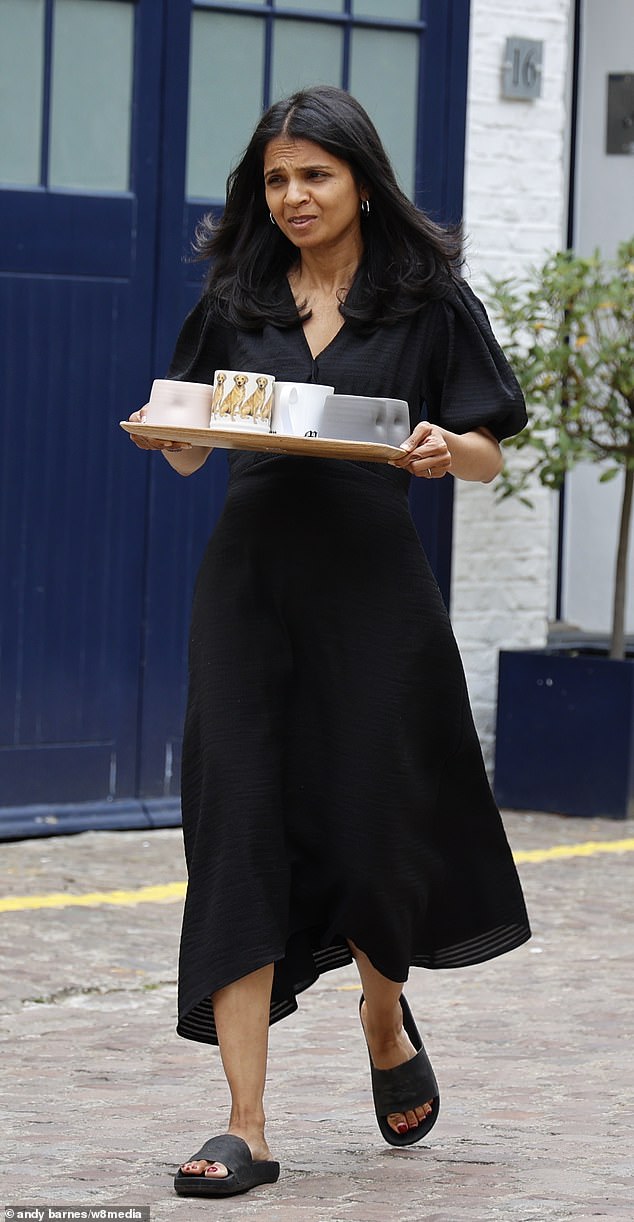 Akshata, who is known for her love of designer items, has come under fire in the past for wearing expensive outfits (pictured handing cups of tea to members of the press following Rishi Sunak’s resignation as Chancellor of the Exchequer) 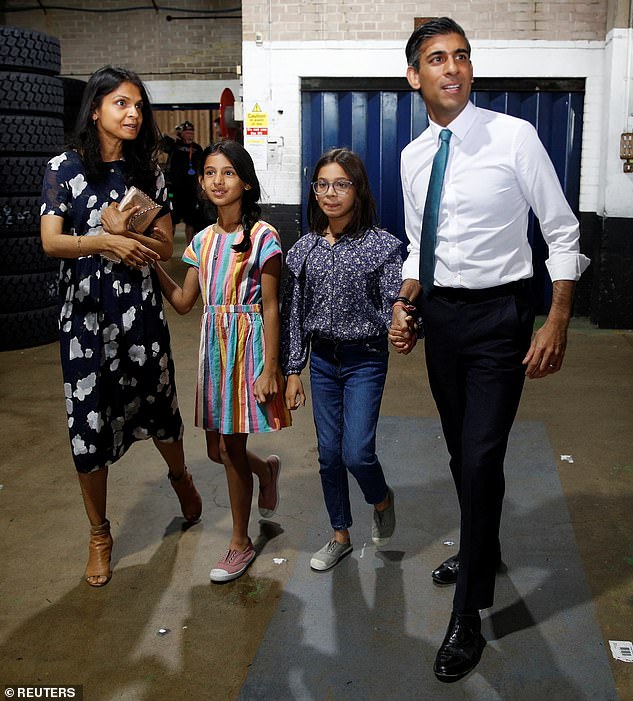 Rishi Sunak and Akshata Murthy have two daughters, Krishna and Anoushka (pictured at Rishi Sunak’s campaign to be leader of the Conservative Party in July 2022) 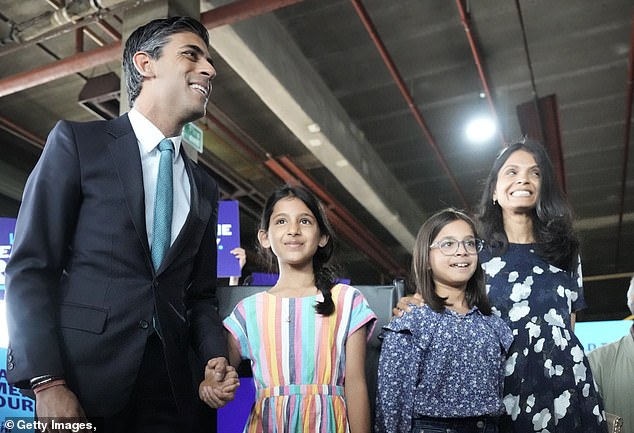 Rishi Sunak and Akshata Murthy have two daughters, Krishna and Anoushka (pictured at Rishi Sunak’s campaign to be leader of the Conservative Party in July 2022)

Together, the couple have a combined fortune of £730 million, the Sunday Times Rich List revealed in May.

Akshata, a former fashion designer, and her brother Rohan were largely raised by their paternal grandparents while their ambitious mother and father pursued careers in engineering and science, according to Tatler.

After finishing school, Akshata moved to the US, where she completed degrees in economics and French at Claremont McKenna College in California and fashion of design and merchandising in LA. 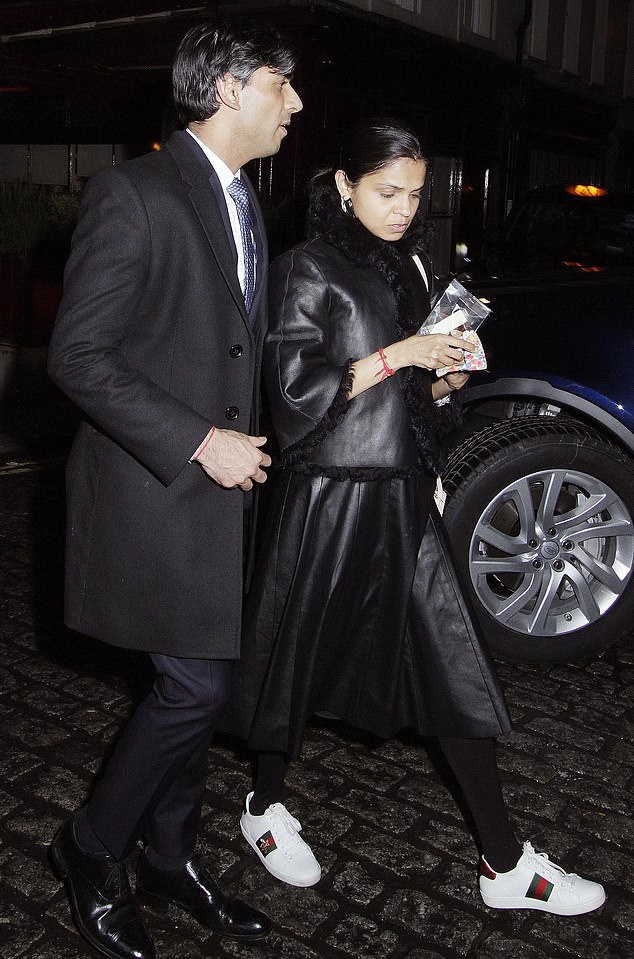 Designer darling: Ms Murthy has previously raised eyebrows with her high-end wardrobe. In December 2020, the IT heiress wore a box-fresh pair of £445 Gucci trainers, a REDValentino shearling and leather coat costing £1,630 and a leather skirt worth more then £1,000, for a date night with her husband in upmarket Mayfair, pictured 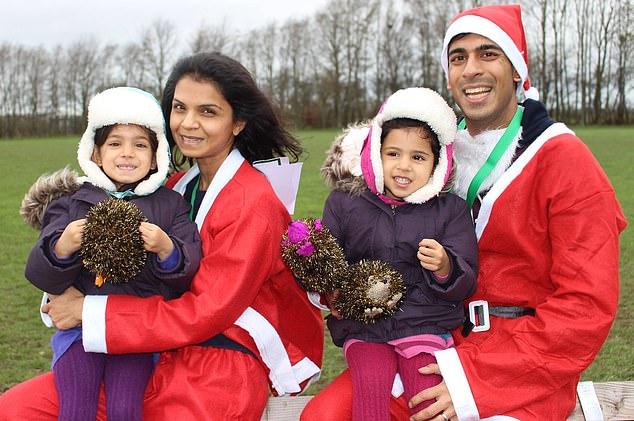 Family fun! Rishi Sunak and Akshata Murthy took part in a Christmas fun-run when their daughters were small, dressing up as Santa for the occasion 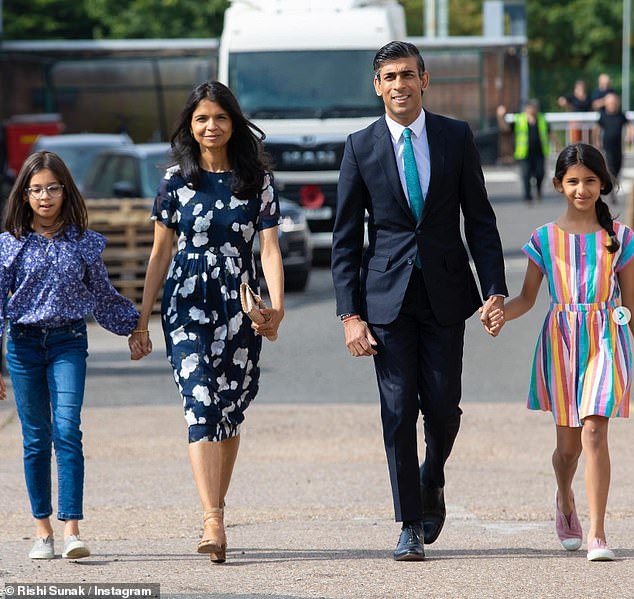 Tory blue: Akshata Murthy, the daughter of billionaire Indian IT mogul Narayana Murthy, donned a £165 dress by high street label Club Monaco for the outing to Margaret Thatcher’s hometown of Grantham. She and Rishi were joined by their daughters on the campaign trail

It was when she moved to Stanford University to study for an MBA that she met her husband Rishi, who was studying at the top college after being granted a Fulbright scholarship.

Four years later, in 2009, they married in a lavish ceremony in Bengaluru in India, which was the couple’s home for the next four years.

During their early years together, Akshata pursued a career in fashion and set up her own business in 2007, Akshata Designs. However, her business venture fell flat and collapsed after just three years.

Nonetheless, the mother-of-two has continued to hold stakes in businesses over the years – including the family empire, Infosys, and a project she and Rishi set up together, Catamaran Ventures UK. She has also been linked to Jamie Oliver’s Pizzeria and Etonian tailor, New & Lingwood.

Eventually Rishi and Akshata moved to the UK in 2013, where Rishi became MP for Richmond in Yorkshire two years later.

The couple now live in a £7 million townhouse in Kensington with their daughters, which is just one of several properties they own.

As well as the townhouse, they also enjoy a £1million flat in Kensington and a £2million mansion in Rishi’s Yorkshire constituency, where he is nicknamed the ‘Maharaja of the Dales’. They also have a £5.5million penthouse in California, overlooking Santa Monica pier, which they use in the holidays.

Although not an elected politician herself, Akshata has become the subject of public scrutiny on more than one occasion – both in relation to her fortune and her fashion choices.

Earlier this year she made headlines for her non-domicile (‘non-dom’) tax status, which is a legal way to avoid paying taxes in Britain on overseas income. The status is often used by the super-wealthy to save thousands or even millions of pounds in tax.

It is thought the bulk of Akshata’s wealth comes from Infosys, which is based in Bangalore.

After the tax revelation was revealed, the couple faced intense backlash – which led to Akshata ultimately giving up her non-dom status and promising to pay tax in the UK on the fortunes she brought in from around the world.

She released a statement defending her ‘entirely legal’ arrangement, but ultimately conceded to give up the status.

The statement read: ‘It has become clear that many do not feel it is compatible with my husband’s role as Chancellor.

‘I understand and appreciate the British sense of fairness and I do not wish my tax status to be a distraction for my husband or to affect my family.

‘This means I will now pay UK tax on an arising basis on all my worldwide income, including dividends and capital gains, wherever in the world that income arises. I do this because I want to, not because the rules require me to.’

As well as her tax status, the mother-of-two has also raised eyebrows with her wardrobe, after stepping out on occasion in outfits worth thousands of pounds.

In December 2020, the IT heiress wore a box-fresh pair of £445 Gucci trainers, a REDValentino shearling and leather coat costing £1,630 and a leather skirt worth more then £1,000, for a date night with her husband in upmarket Mayfair.

However, during Rishi’s first leadership campaign in the summer of 2022 – in which he lost out to Liz Truss – Akshata stepped out in a high-street outfit at a campaign event for her husband.

She donned a £165 dress by high street label Club Monaco for the outing to Margaret Thatcher’s hometown of Grantham, where Rishi was appearing.