Home » Lifestyle » Who gets what from COVID-19 stimulus packages? What is JobKeeper?

Who gets what from COVID-19 stimulus packages? What is JobKeeper?

Billions of dollars are being poured into the Australian economy to offset the damage being done to businesses and employment by the coronavirus pandemic.

The federal government’s huge cash splash comes directly from the public purse and has been welcomed by the Labor Party and economists as fears rise about how the outbreak, and attempts to stop it, will hurt the country's financial future.

But what do you get from billions of dollars of government spending? And why is the government using this money in the first place?

What do you get directly from the stimulus packages?

The federal government unveiled a $17.6 billion stimulus package on March 12, targeting mostly businesses and welfare recipients, including pensioners. A second package worth $66 billion was announced 10 days later. And eight days after that the government returned with a $130 billion wage subsidy plan.

That pays for a $1500 fortnightly payment called JobKeeper to workers at companies hard-hit by coronavirus for six months. Among other measures is a $750 payment to anyone receiving benefits such as low-income earners and youth allowance recipients. This came in addition to a $2.4 billion boost to health services.

Supplementary payments of $550 a fortnight for JobSeeker and other benefit recipients have been introduced to help those losing work and their jobs during the outbreak.

There is also the option to dip into your superannuation by up to $20,000 if you lose your job or more than 20 per cent of your work due to the virus.

Who gets what from the $17.6 billion federal stimulus package?

The federal package is front-loaded, meaning a burst of money comes at the start – $11 billion over the next three months. Here are the highlights:

Companies with a turnover of up to $500 million will have the instant asset write-off threshold lifted to $150,000 temporarily (so businesses can immediately deduct the value of any asset purchases up to $150,000 in their tax returns) and the government has also pledged to help cover half the salaries of apprentices and trainees for eligible employers and to give thousands of dollars in tax-free payments to hundreds of thousands of small and medium businesses. Most business benefits are paid out when business activity statements are lodged with the tax office.

Who gets what from the $66.1 billion federal stimulus package?

The most recent tranche of government money goes through employers to workers to keep people in their jobs. At $1500 a fortnight (before tax), the JobKeeper payment is about 70 per cent of the median wage and a little more than the minimum wage. But employers can top up the payments too with actual pay or through annual leave and can choose to pay superannuation on top, though they do not have to do either.

Only employers who estimate their turnover has or will fall by 30 per cent, or 50 per cent if they normally earn more than $1 billion in revenue annually, compared to the same time last year are eligible for the scheme.

The tax office will be tolerant and use its discretion where the employer operates is in a variable industry, an acquisition distorts the comparison, or the employer ultimately sees a shortfall slightly less than the threshold amount.

More information about this payment is available here.

Employers are required to report information to the Tax Office on a monthly basis and the funds are paid to businesses a month in arrears.

How does the wage subsidy plan work?

The wage subsidy is forecast to go to about 6 million Australian workers over the next six months, with the money paid first to employers through the tax system from May (but backdated to March). Here’s exactly who is eligible:

The NSW government has revealed a $2.3 billion package, including spending on health services and $1.6 billion in tax relief for small businesses. Fees and charges for small businesses such as bars, cafes and restaurants are being waived and $250 million will be spent to employ extra cleaners for places such as public transport and schools.

Victoria has a $1.7 billion package, including $550 million to repay payroll tax to businesses, $500 million in hardship payments and grants to badly hit industries and $600 million to waive fees.

In Western Australia, there is a $607 million package, including one-off grants for businesses, and freezing the household cost for bills such as electricity, water, registration and public transport. Typically, these would rise with inflation.

Queensland has payroll tax relief for businesses and a tourism package of $27 million and has introduced a $500 million loan facility to help affected businesses hold on to their staff, with up to $250,000 in payments.

Click here to see more on how the federal stimulus package applies to households. 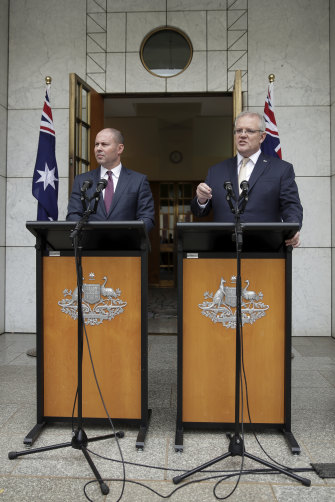 How do stimulus packages help the economy?

When the economy is slowing down, it's common to hear about the Reserve Bank of Australia cutting interest rates to try to encourage borrowing and spending. However, monetary policy is just one lever that can be pulled and rates are already at a record low 0.25 per cent.

Automatic stabilisers, which are mechanisms that help manage fluctuations, also kick in through the ebbs and flows of the economy. These include government benefits and assistance. Improvements in job numbers mean fewer people need income help but as unemployment rises, the opposite is true and more is spent helping these households.

But when the shock is more significant and these stabilisers are not easing the highs and lows, a less commonly used option – fiscal stimulus packages – can be used.

This is where the government directly takes action and spends extra money to give the economy an adrenaline shot. This can come in many different forms, such as cash handouts, grants, infrastructure building programs and tax reductions.

However, the overall aim is the same – to give the economy a big enough boost to get through a difficult period. For instance, providing cash handouts directly to households flows into retail and services, provided recipients of the money go out and spend.

This helps keep people in these industries employed, paying their mortgages and bills and spending on services and goods themselves. So if you're a recipient of the $750, the idea is that you spend it.

Prime Minister Scott Morrison has directly targeted the government's packages to keeping Australians in jobs and to provide a safety net for those who lose work.

The aim of the wage subsidy plan is a little different. Mr Morrison has said the economy will go into "hibernation" while the worst of the pandemic passes. In that context, the $1500 payment is less about boosting the economy than helping Australians pay for essentials while the economy is largely paused.

"We want to keep the engine of our economy running through this crisis," Mr Morrison said. "It may run on idle for a time but it must continue to run."

This kind of spending comes at a very real price. It can cause a budget deficit, where government spending is more than revenue. If too much is spent on stimulus, it can risk years of debt and deficit, but if there isn't enough of a boost in the right areas, the country risks entering into a recession.

The government can borrow to cover any shortfall in domestic demand, and collapsing global interest rates put it in a better position to do this. Getting the balance wrong can be difficult politically but, more crucially, it has a real-life impact on the livelihood of Australians, their jobs and future prosperity.

It's not always clear until years down the track whether the actions being taken are the right ones.

Has there been a stimulus package like this before?

Yes. In Australia and overseas, governments have brought in stimulus packages to try to avoid a recession or at least reduce the severity of a downturn.

Several countries including the United Kingdom, Canada, Germany and New Zealand have introduced their own wage subsidy plans to address the pandemic's economic effects.

The most comparable and recent example in Australia is the large stimulus package implemented during the global financial crisis by the Rudd government. An initial package worth $10.4 billion was unveiled in October 2008, including payments to pensioners, family support payments and first-home-buyer grants, to help lessen economic turbulence.

In February 2009, a second package worth $42 billion was announced. This included a $26 billion infrastructure program, $12.7 billion in direct payments to households and $2.7 billion for businesses. Within this package, Australians earning under an $80,000 threshold were given $950 and were encouraged to spend to boost the economy.

Kevin Rudd said at the time: "The government will move heaven and earth to reduce the impact of the global recession on Australia."

State and federal governments are still in negotiations about further measures to help tenants manage their rental payments.

"The government will continue to do all within our power and all within our capacity," Mr Morrison said at a press conference on March 30 after unveiling the wage subsidy.

And the government is yet to finalise the details of its $130-billion JobKeeper program. Parliament will have to be recalled to pass legislation to put the government's policy into law, with money not set to start flowing until May.