A nurse has revealed what they really mean when they say ‘your baby looks just like you’.

In a TikTok video, Miki Rai claimed nursing students are trained to say the common sentence when meeting an ‘ugly’ baby to avoid telling the parents what they really think.

‘My preceptor in labour and delivery in nursing school actually taught me this,’ Miki said.

The US nurse posted the video in response to an Aussie mum who was confused after someone said hew newborn son looked like her.

‘Personally I think the baby is real cute,’ Miki captioned the video. 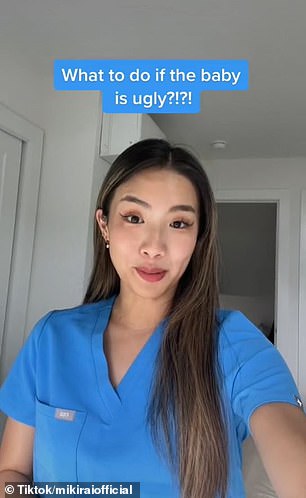 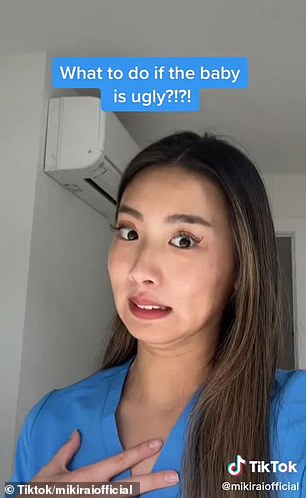 In a TikTok video, US nurse Miki Rai (pictured) claimed nursing students are trained to tell parents their baby looks ‘just like them’ when they see an ‘ugly’ baby

In the comments she clarified this isn’t what she does personally but is what students are taught.

The short video has since been viewed more than 667,000 times and others shared what they say to parents.

‘In my family, we say “aww look at the babyyyy”,’ one person wrote.

Another said: ‘My mum pushed me out after 16h of active labour and the first thing my dad said was ‘wow the baby looks like an alien’.’

Miki shared the little-known knowledge in a TikTok video that’s since been viewed more than 667,000 times

Other parents said over time as newborns grow their appearances changes, and so you shouldn’t judge too quickly.

‘If the baby is ugly give it three to four months it won’t be anymore. I sobbed when my daughter was born she was so ugly but she is gorgeous now,’ one parent wrote.

Another said:  ‘Some babies are ugly but after a week their appearance change. My son looked like grumpy when he was born but looks adorable a week later.’