FILM fans are expected to be given the green light to start visiting cinemas again from next month but how will the big screen experience change due to coronavirus restrictions?

The Sun has spoken to some of the UK's major cinema chains to find out what screenings will look like when they reopen. 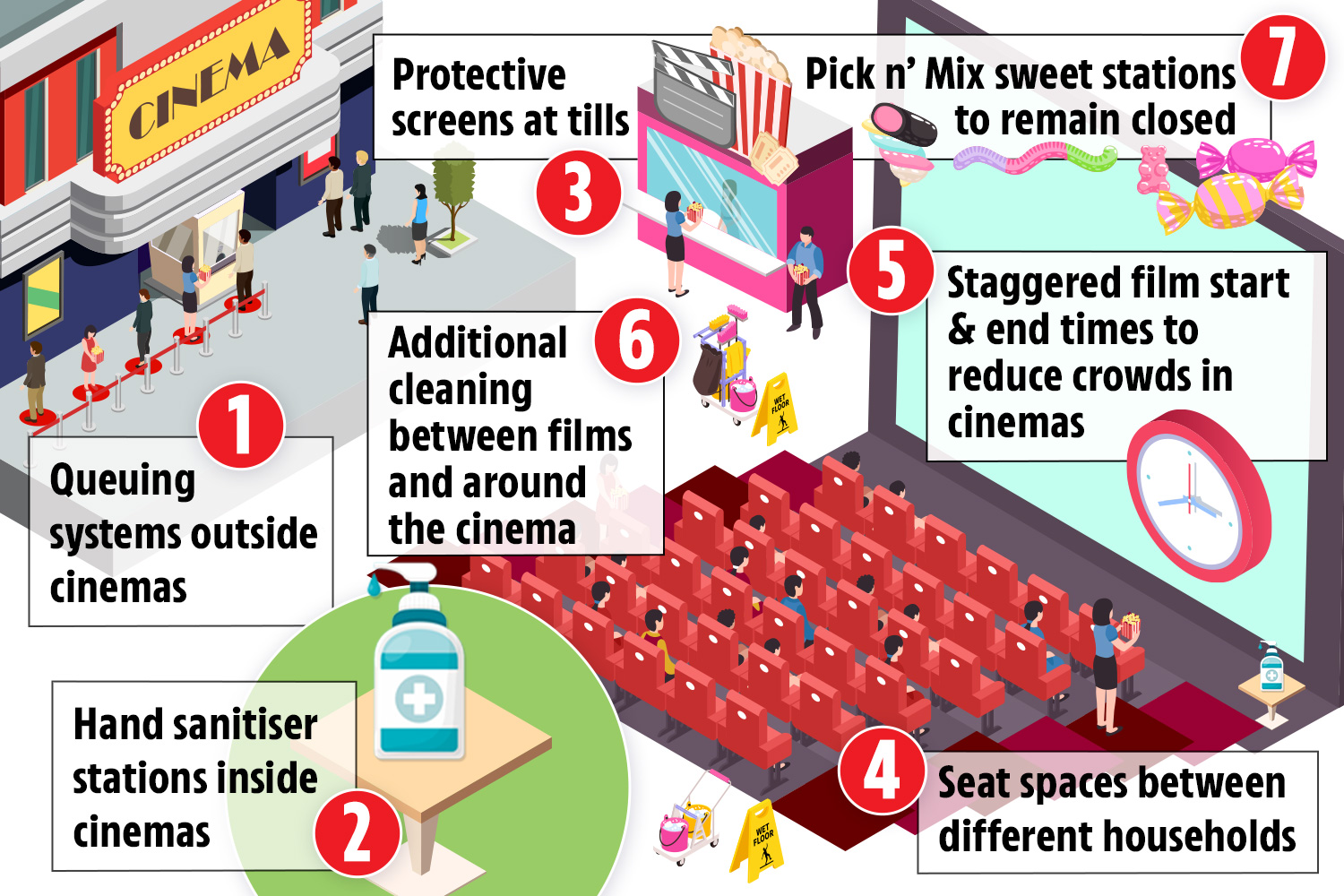 It comes as Prime Minister Boris Johnson is expected to confirm today that cinemas, art galleries and museums in England will be allowed to reopen from July 4.

These venues have all been closed since coronavirus lockdown came into force on March 23, if not sooner, although bear in mind the rules are different in Northern Ireland, Scotland, and Wales.

But despite lockdown restrictions easing, reopened venues are likely to look very different.

Here's what we know so far, plus see the box below for details of when cinemas are planning to reopen.

When will cinemas reopen?

HERE'S when some of the major cinema chains say they're hoping to reopen if the government gives them the green light.

See When will cinemas reopen for more information.

Both Cineworld and Picturehouse say film screenings will have staggered start and end times.

The idea behind this is to have fewer customers entering and leaving cinemas at the same time, as well as to prevent a build-up of crowds in the foyer.

Families and friends who book together will be allowed to sit with each other at screenings but it's likely seats will be kept free between different bookings.

Cineworld and Picturehouse says exactly how this will work in practice depends on the capacity and layout of each screen.

Film fans will also be encouraged to book seats online at the two chains before turning up at the cinema in a bid to reduce the number of people in foyers.

Curzon meanwhile, says it is likely to reopen with reduced capacity, and Vue adds that it is designing procedures that can "provide the degree of physical distancing required".

Exact safety measures at both chains have yet to be confirmed.

Both Cineworld and Picturehouse say cafes, bars, and restaurants inside their cinemas will remain closed when they reopen.

That's despite the government expected to confirm that these venues can also reopen from July 4. Currently, these establishments can only operate for takeaways.

But both Cineworld and Picturehouse say some snacks and drinks will still be available to purchase, although Cineworld warns it will temporarily run a limited menu.

Cineworld adds that customers can continue to bring their own cold food and non-alcoholic drinks into the cinema with them.

The Sun has asked both chains whether pick n' mix stations will be open but Phil Clapp, chief executive of trade association the UK Cinema Association, told Time Out that this "ain't going to happen" due to the risk that self-service could spread coronavirus.

Mr Clapp also told Time Out we may see queues outside of cinemas in a bid to limit the number of people inside at any one time.

If this is the case, you're likely to see markers clearly showing where to stand or staff on the door managing where customers should stand and indicating when you can go in.

Both Cineworld and Picturehouse say they'll have hand sanitiser stations installed for both customers and staff to use, and it's likely other chains will do the same.

Protective screens will be installed around kiosks and tills at both Cineworld and Picturehouse cinemas, and again it's likely other chains will follow suit.

Similar protective screens are already in place around tills at most major shops and supermarkets.

Extra cleaning will take place at Cineworld and Picturehouse cinemas.

Both cinemas say staff will focus on "high touch points", such as areas around tills and in toilets.

In addition, Cineworld says there will also now be added time to clean screens between films.

Staff will also be given specific Covid-19 safety training, as well as personal protective equipment (PPE) where necessary.

Picturehouse says contactless payments will be encouraged, although it will continue to accept cash.

Cineworld says tills will accept contactless card payments up to a value of £45, as well as Apple Pay and Google Pay mobile payments with no limit but it's unclear if cash payments will be allowed.

The popular chain adds that most of its self-serve ticket machines also accept contactless payments, although it's working on upgrading the rest.

Most shops and supermarkets are also encouraging the use of contactless payments, although it will be down to the individual chain or store as to whether to accept cash as well.

We've also been behind the scenes to see what gyms will look like when they reopen.

Plus, here are all the changes you can expect when you visit an Intu shopping centre now "non-essential" stores are open.

And we take a look at how Greene King pubs will operate when they're allowed to open their doors.

Related posts:
Gareth Bale ‘doesn’t care’ about not playing at Real Madrid, says former Los Blancos boss with summer transfer likely – The Sun
What are air bridges and which holiday destinations could be linked to the UK?
Popular News
Ji-who? Deavan Clegg and Topher Park make out in shared photos and her 90 Day Fiance fans can't get enough
29/11/2020
Man Utd wonderkid Ramon Calliste, called ‘the next Giggs’, now owns luxury watch business and makes £5m a year – The Sun
26/03/2020
Megan Thee Stallion Addresses Criticism Over Twerking: ‘I Love to Shake My A**’
26/03/2020
Police guard shops to stop coronavirus panic-buyers and enforce social distancing – The Sun
26/03/2020
Coronavirus: Good Morning Britain’s Dr Hilary reveals ‘game-changing’ self-testing kit
26/03/2020
Recent Posts
This website uses cookies to improve your user experience and to provide you with advertisements that are relevant to your interests. By continuing to browse the site you are agreeing to our use of cookies.Ok