Home » Lifestyle » Wearn turned his back on AFL, now he’s on the cusp of sailing gold

Wearn turned his back on AFL, now he’s on the cusp of sailing gold

Australia’s sailors are set to revive their golden glow with Matt Wearn taking a stranglehold on the Laser category after a flawless display on the rough water of Enoshima Harbour on Thursday.

Wearn, who turned his back on pursuing an AFL career to focus on sailing, is on the cusp of having his decision vindicated as he edged ever closer to a first Olympics medal, overcoming a jittery start to the regatta. 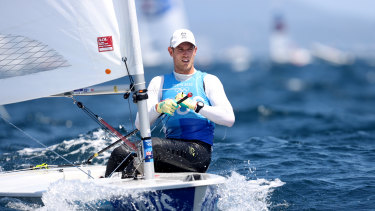 The 25-year-old won both the seventh and eighth Laser races to take a commanding lead in the section, and could even confirm a gold medal as soon as Friday when the final two races are held before the double-points medal event.

Having won the Laser gold medal at both London (Tom Slingsby) and Rio (Tom Burton), Australia had high hopes of Wearn justifying the selectors’ decision to choose him as Australia’s representative in the one person dinghy classification over Olympic champion Burton.

And despite struggling into 17th and 28th in the first two races of the regatta, Wearn has found his mojo and hasn’t finished outside the top four in the six subsequent races.

He started the latest day behind Cypriot Pavlos Kontides, but after his greatest rival didn’t finish the seventh race, it handed the advantage to Wearn. He wasn’t about to cede it, powering to a 24-second win from the US’ Charlie Buckingham in the final race of the day.

‘You’re never going to feel bad coming off the water after two wins.’

“You’re never going to feel bad coming off the water after two wins,” Wearn said. “There was a bit more breeze today which made for great sailing.

“It felt like I had underperformed earlier in the week so it was nice to be able to go out put together some performances like I would expect myself to do. I had a couple of good starts which helped set up my races, but I know that there is still plenty of racing left.”

Wearn (29) has a 17-point buffer from Kontides (44) with Norway’s Herman Tomasgaard (49) third and as long as he avoids any potholes in Friday’s two races he will be favoured to take home gold.

The finishing position in every race is added to a sailor’s score – bar their worst which is discarded – with the lowest declared the gold medal winner after the medal race. The top 10 boats qualify for the medal race and are liable for double points. 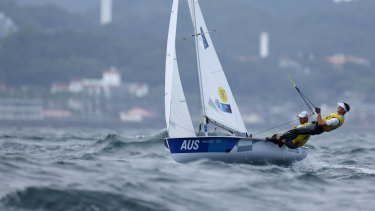 Mathew Belcher and Will Ryan have made a solid start to the men’s 470 class at Enoshima.Credit:Getty

The magic number Wearn needs to lead by is 20 points to confirm the gold before the medal race.

Australia’s men’s two-person dinghy 470 crew Mathew Belcher and Will Ryan also had a perfect day in their Olympics campaign, winning both the third and fourth races in their category.

The pair won silver in Rio and hold top spot nearly mid-way through the regatta after holding off the Brazilian boat in the last race of the day.

Cousins and Rio silver medallists Jason Waterhouse and Lisa Darmanin are scrambling to stay in medal contention in the Nacra 17 division after a consistent day at Enoshima, the site of the 1964 Olympics regatta.

The pair had fourth-, seventh- and eighth-placed finishes in their three races on Thursday, putting them in fifth on 25 points half-way through the regatta. Italians Ruggero Tita and Caterina Banti (eight) have won three of the six races.

Meanwhile, Jake Lilley is in eighth spot overall after six races of the Finn category.

Never miss a medal or great sporting moment with our Olympic update emailed daily. Sign up for our Sport newsletter here.