CONOR McGREGOR famously claimed "I fear no man" – and proved his point when he took on The Mountain from Game of Thrones.

The UFC legend bravely sparred against the 6ft 9in strongman from Iceland who weighs a whopping 400 pounds. 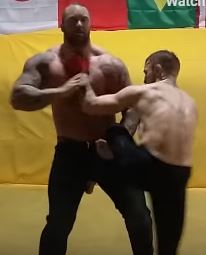 McGregor was put through his paces by the World's Strongest Man winner following his win over Chad Mendes in 2015.

The Irishman was in Iceland at the time training for his upcoming fight against Jose Aldo when he bumped into Hafthor Bjornsson, also known as Thor.

After he asked him for a photograph, the pair squared off and started to spar as onlookers watched on in disbelief.

McGregor, who weighed around 145lbs and stands at 5ft 7in, was dwarfed by his opponent as he tried to land a few cheeky body shots.

Thor remained in control throughout as he tried to squeeze the Irishman's head between his bulging biceps.

After their encounter, the Icelandic strongman claimed he could have defeated McGregor in a matter of seconds if he wanted to. 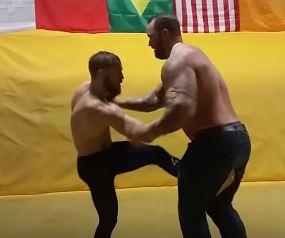 Speaking to YouTube channel Off the Ball, he said: "Bring me shorts and put us in a cage, and I'll fight him again.

Thor – who lost his World's Strongest Man title last year – said it would be over "in 10 seconds" if he was to properly grab hold of the Irishman.

When asked how many versions of McGregor it would take to beat him, he replied: "Maybe five."

But McGregor recalled a different version of events when he was asked how the sparring session went.

"We squared off as if we were going to do it.

"Then all of a sudden, he's bouncing and I'm bouncing.

"Next thing you know, we're having a full, bareknuckle body shot fight."

He added: "I was hitting hit with some shots.

"I had to hit him with some shots. He was trying to hit me as well.

"He wasn't taking it easy. He tried to grab me and tried to pull my head off. 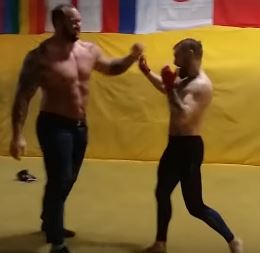 "I defended, freed the head. I was like this motherf***** is so big, I have to start smashing him to the body."

Despite the size difference, former featherweight and lightweight champ claimed he "folded" his opponent up. 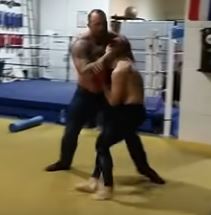