Innovative ideas like turning food waste into biodegradable cling wrap and using artificial intelligence to sort plastics for recycling are the focus of the Morrison government's latest round of federal research funding to help boost local manufacturing.

Industry, Science and Technology Karen Andrews said the research grants would help meet the Morrison government's commitment to phase out exports of unprocessed waste by 2024 and recycle 80 per cent of waste by 2030. 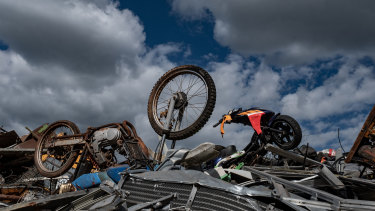 The federal government is funding research by local waste and recycling businesses to help Australia meet a looming deadline on waste exports.Credit:Bloomberg

The federal government announced $15 million in grants for nine projects in plastics, paper, glass and tyres which is expected to generate $40 million in co-investment from private companies.

Waste recycling and clean energy is one of six national manufacturing priorities in the government's modern manufacturing strategy. The lastest funding is being delivered under round 10 of the Commonwealth's Cooperative Research Centre grants.

Another company, Great Wrap, is developing technology to convert food waste into a compostable plastic cling wrap which can be used with food or by the freight industry to secure pallets of goods.

The federal government passed its Recycling and Waste Reduction Act in Parliament last year to phase out export of waste plastics, paper, glass and tyres from 1 January, 2021.

"Cutting-edge recycling technology is critical in building the waste and recycling industry’s capacity, in creating new markets for recycled materials, and with it new jobs," Ms Ley said.