Vixens stamp their authority on top spot as Swifts stumble

The Melbourne Vixens have solidified their place on the top of the Super Netball ladder, beating the Swifts 55-62 in a physical encounter on Tuesday evening.

The intensity of the match was most evident moments before the start of the second half, with Swifts defender Lauren Moore getting on her hands and knees to assist the match official in mopping up the sweat outside the Vixens circle.

Swifts coach Briony Akle said the hard-fought battle was exactly what she had been preparing for.

"We are playing great netball. I think we take a lot of positives away from tonight."

Melbourne shooter Mwai Kumwenda was player of the match, making 47 from 48 shots despite the close attention of world-class defender Sarah Klau. 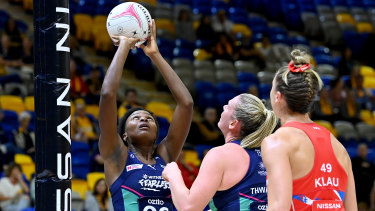 Mwai Kumwenda was almost flawless for the Vixens, missing just one shot across the four quarters.Credit:Getty

"I'm very happy with my teammates and the way we played today … it was a tough match," she said.

Kumwenda’s starring role was helped along by former Diamonds star Caitlin Thwaites who played a full 60 minutes for the Vixens.

"I think the redness of my face is a fair gauge of the work rate that was required to get that done," Thwaites said.

Despite the stellar performance, Thwaites said she was unlikely to do a "John Farnham" and come out of retirement from the Diamonds at the end of year.

"I don't think [I would come out of retirement] at this point I've just got my blinkers on … it's still quite overwhelming that we might be up here [Queensland] for six weeks depending on how we go," Thwaites said.

The Swifts took control of the play in the first quarter after the Vixen’s lost Liz Watson early. Watson hobbled to the sidelines after twisting her ankle, with the scores evenly tied at 17-17 after the first quarter. Returning to the court for the second quarter, Watson could be seen limping at times during play, raising eyebrows given Watson’s importance to the Vixens and with the season so close to finals.

The Vixens are six points clear of the Swifts in second place.

Swifts shooters Helen Housby and Sophie Garbin made three super shots in the final five minutes to at one point close the margin to 53-59 with two minutes to go. But the last-ditch effort was not enough to take the win, with the Vixens walking away with the four points.

The Swifts embarked on some “soul-searching” after a shock 13-point loss to the Queensland Firebirds on Saturday. After last night’s loss, it seems the Swifts will need to dig deeper to find the spirit that led them to last year’s title.