Victoria has ‘no plans’ to prop up embattled Virgin Australia

The Andrews government has rejected Queensland's call for "all governments" to help fund embattled airline Virgin Australia through the coronavirus crisis.

Australia's second largest carrier has been in a trading halt since Tuesday, has grounded almost its entire fleet and is drowning in close to $5 billion of debt. 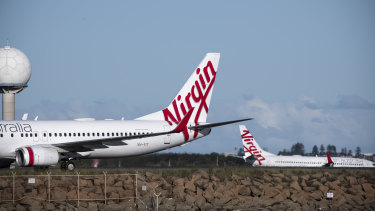 The Annastacia Palaszczuk government in Queensland has offered Virgin a partial lifeline of $200 million on the condition it restructured its debt, continued regional flights and kept its headquarters in Brisbane.

"If we're going to get through this pandemic with two national airlines … then all governments need to come together to ensure that is the case," Queensland's State Development Minister Cameron Dick said.

"Queensland can't do this on its own. This is a national airline weathering a national crisis and it needs a national response which is why we're asking the Australian government to take the lead on this."

The Australian government has so far rebuffed the carrier's pleas for a $1.4 billion loan, but has offered $165 million to keep both Qantas and Virgin operating essential domestic routes.

Deputy Prime Minister Michael McCormack, who is also the federal transport minister, said it would continue to monitor the industry but that "the best solution for the airline would be a market solution".

"Sustaining Australia's aviation industry is critical to protecting livelihoods and saving lives. And the federal government is exploring all possible avenues to keep two airlines in the air, throughout this pandemic and on the other side of it," he said.

"I welcome states and territories exploring ways to assist their local aviation businesses and welcome the Queensland government's commitment to Virgin."

Victorian Health Minister Jenny Mikakos talked up the importance of the aviation industry yesterday, but said the government had no announcements to make.

A spokeswoman later said "the Victorian government currently has no plans to provide funding to Virgin".

"Scott Morrison must provide a lifeline to Virgin through extending or guaranteeing lines of credit and taking an equity stake," Ms King said in a statement.

"Such an intervention will give the government the temporary ability to support the airline through this crisis before the industry bounces back – and it will – when the government can recoup its investment."

About 8000 of Virgin's 10,000 employees have been stood down, while all of its pilots at its low-cost arm Tigerair and crew based in New Zealand will be made redundant.