Usher opened up about his newborn daughter and how "she had a different plan" for her birth date. Plus, see his little one's first image. 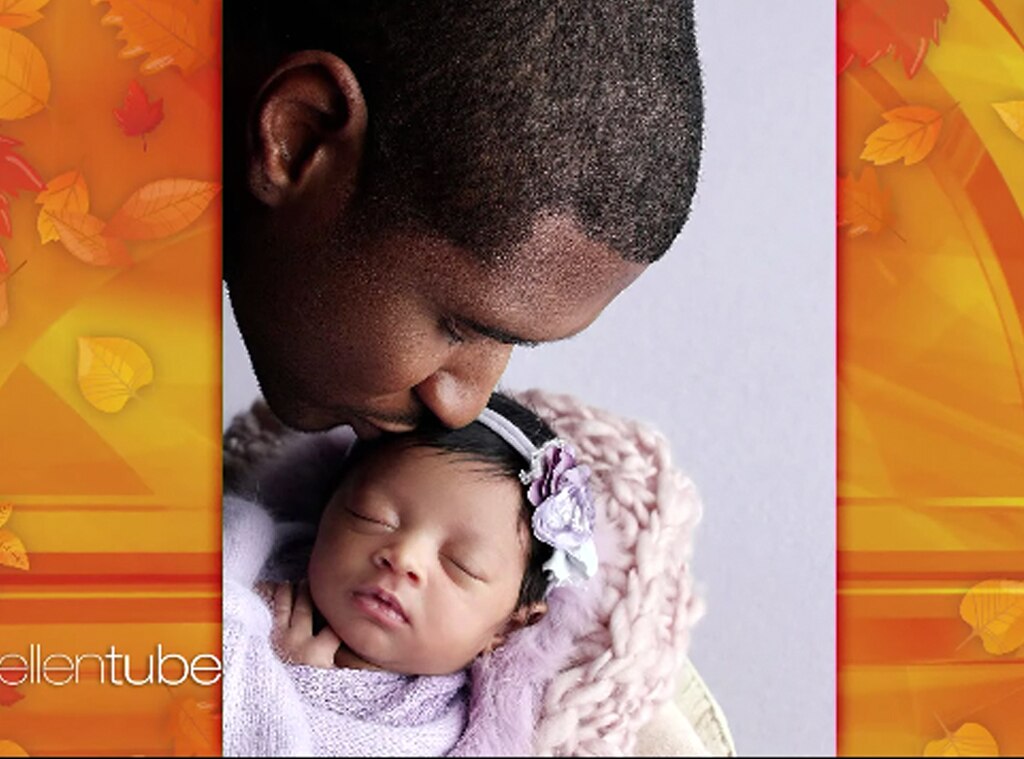 Usher is in full dad mode.

It was just two months ago that the Grammy winner shared the exciting news he was a father again. Back in September, he and his girlfriend Jenn Goicoechea welcomed their first child together, a baby girl named Sovereign Bo Raymond.

And while the couple kept the baby news tight-lipped throughout Jenn's pregnancy, it looks like Usher is ready to open up about his first few months with his little one.

During a virtual appearance on The Ellen DeGeneres Show on Wednesday, Nov. 11, the singer shared the first image of his newborn daughter while also discussing her early birth in a candid interview.

"She looks like a little porcelain doll. She doesn't even look real," Ellen DeGeneres said, marveling at Sovereign's baby photo. However, Usher cheekily reminded the talk show host that his little one is cute "until you have to change her diaper."

The "Bad Habits" singer also quipped that his daughter is already calling the shots. But he mentioned he's not too surprised by this since he and Sovereign share the same zodiac sign.

As he put it, "She came out early. She was scheduled to be a Scorpio but decided she had a different plan. Libras, you know, they kinda have their minds made up on what they wanna do."

"It's funny because the umbilical cord was wrapped around her wrists," he added. "So she's pulling the thing, like, 'Pull me outta here, it's time to go!'"

Trista Sutter Says Producers Had Storylines for Her Bachelorette Party

"As they get older, I'm less cool of a dad," Usher explained of how his sons see him these days. "So now I'm starting this whole cycle over again and I'm kind of the apple of her eye right now."

The superstar shares his two kids with his ex-wife Tameka Foster.

Usher's mom is also over-the-moon over his baby girl. He admitted that she's already redecorating her place to make room for Sovereign.

"My mom, with all of the kids, she gives them their own room," he told Ellen about his children and niece. "I'm like, 'Mom, you're kind of out of space, what are you gonna do?' She's like, 'Oh no no no no, she's gonna have her room. She's just gonna take your room.'"

"She's kicking me out," he said with a laugh. "I'm sleeping on the couch and Sovereign, she now has my old bedroom. But it's cool."

In late September, Usher shared the heartwarming news that his bundle of joy arrived early.

"We are feeling blessed and full of love with the arrival of our beautiful baby girl, Sovereign Bo Raymond," he captioned his Instagram post. "'Isn't She Lovely' by Stevie Wonder on repeat."

A few weeks before his daughter's arrival, the father of three raved about the baby news during an interview with James Corden. "It's been a tough time for everybody, so I'm really excited to have this incredible news," he told the host. "This new arrival. I'm really anticipating it."

Now, the singer's little Libra is here and making everyone swoon.

Watch Usher's full interview with Ellen in the video above!

Related posts:
AC/DC Launch DC Shoes Collaboration for 40th Anniversary of 'Back in Black'
Outlander: How did Tobias Menzies feel about Black Jack death? Star on Culloden scene
Popular News
Lori Loughlin, Hubby Mossimo Pay Fines in College Admissions Bribery Case
25/11/2020
Man Utd wonderkid Ramon Calliste, called ‘the next Giggs’, now owns luxury watch business and makes £5m a year – The Sun
26/03/2020
Megan Thee Stallion Addresses Criticism Over Twerking: ‘I Love to Shake My A**’
26/03/2020
Police guard shops to stop coronavirus panic-buyers and enforce social distancing – The Sun
26/03/2020
Coronavirus: Good Morning Britain’s Dr Hilary reveals ‘game-changing’ self-testing kit
26/03/2020
Recent Posts
This website uses cookies to improve your user experience and to provide you with advertisements that are relevant to your interests. By continuing to browse the site you are agreeing to our use of cookies.Ok