The United Arab Emirates will land a rover on the Moon in 2024 to explore areas previously untouched by earlier human missions, the country confirmed.

If the UAE succeeds in landing a rover on the lunar surface it would become only the fourth nation on Earth to do so – following the US, Soviet Union and China.

The Dubai Media Office said that the 22 pound rover will be an integral part the oil-rich nations wider mission to build the first settlement on Mars in 2117.

The lander will be named ‘Rashid’ after the father of Dubai’s ruler Sheikh Mohammed bin Rashid Al Maktoum and is the latest move for the Emirati space programme.

The programme has been expanding rapidly over the past few years – a probe is already hurtling through space on its way to Mars, and last year the UAE sent its first astronaut to the International Space Station. 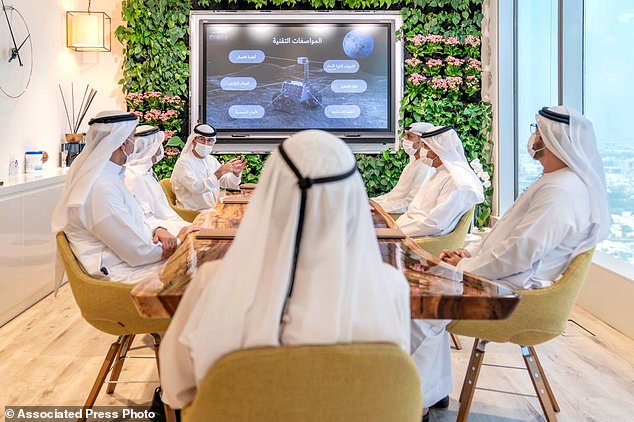 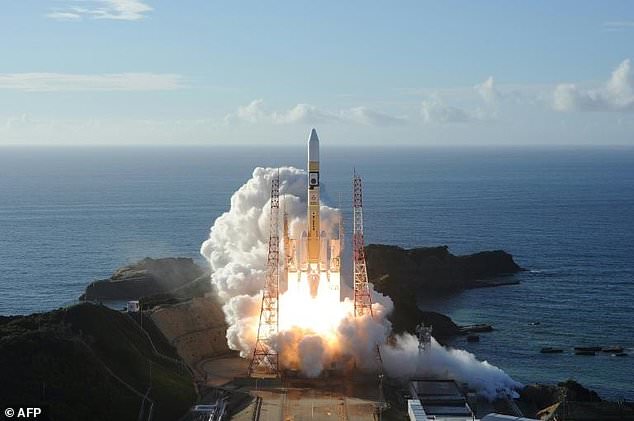 ‘We have launched a new Emirati project to explore the moon,’ explained UAE leader Sheikh Mohammed on Twitter .

It will be launching in 2024, the same year the US is expected to send the first woman and next man to land on the surface of the Moon.

Sheikh Mohammed also said that the rover will cover ‘areas not yet reached in previous exploration missions’.

Specific details of the rover, beyond its size and projected landing sites, have not yet been revealed by the UAE space agency.

They did confirm the rover will carry two high-resolution cameras, a microscopic camera, a thermal imagery camera, a probe and other devices.

The ruler did not elaborate on the location that the UAE planned to explore, nor how they would launch the rover into space.

The launch of its Amal, or ‘Hope,’ probe to Mars took place at Japan’s Tanegashima Space Center in July.

Mitsubishi Heavy Industries, which launched that probe, said nothing had been decided about the launch of the moon rover and declined to comment.

The Emirati rover will study the lunar surface, mobility on the moon’s surface and how different surfaces interact with lunar particles, the government later said.

The project marks another first for the UAE, making it the first trip to the moon by an Arab country and would be only the fourth to land on the surface. 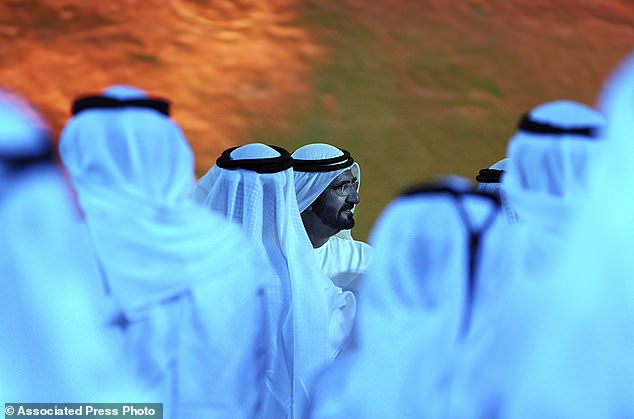 The oil-rich country has bold plans for the future of space travel, including building a colony on Mars by 2117 – officials say the lunar rover is a step towards that mission 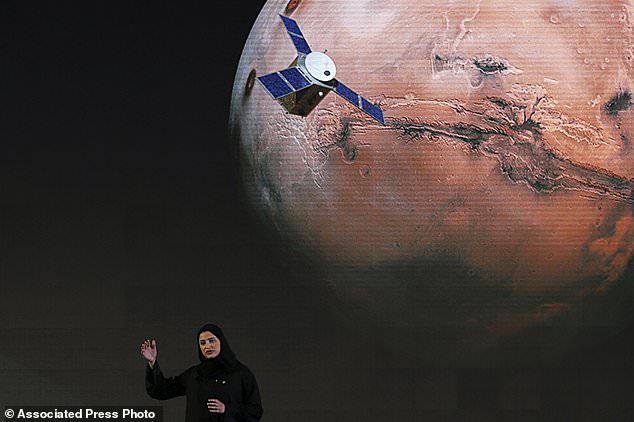 Sarah Amiri, deputy project manager of the United Arab Emirates Mars mission, talks about the project named “Hope,” or “al-Amal” in Arabic. It will land on Mars in February 2021

The Soviet Union was the first nation to land on the Moon with Luna 9 in 1966 – so far the only other countries to make a soft landing on the surface are China and the US.

India tried and failed to land a spacecraft last year and Israel saw its own small spacecraft crash into the lunar surface before touchdown.

Sheikh Mohammed said the lunar mission was part of the country’s space strategy to build new knowledge-based and scientific capabilities.

In July, the UAE’s ‘Hope’ probe was launched from Japan and is on its way to Mars – set to reach the Red Planet in February 2021.

This is the year the UAE celebrates 50 years since the country’s formation.

In September that year, the probe will start transmitting Martian atmospheric data, which will be made available to the international scientific community, officials say.

WHO HAS BEEN TO THE MOON?

In total twelve people have walked on the moon.

Neil Armstrong made history by becoming the first person to set foot on the moon.

Edwin ‘Buzz’ Aldrin followed Neil Armstrong on to the surface of the moon.  His popular nickname gave itself to the animated characte Buzz Lightyear.

Pete Conrad and Alan Bean were the moon walkers on the Apollo 12 mission.

Alan Shepard and Edgar Mitchell who were part of the Apollo 14 mission. They launched on January 31, 1971, and landed in the Fra Mauro region of the moon, the original destination for Apollo 13.

David Scott and James Irwin landed on the moon and stayed for three days, until August 2nd.

John Young and Charles Duke were the next men to walk on the moon. When the crew reached lunar orbit, the mission almost had to be aborted because of a problem with Command/Service Module’s main engine.

The final people to walk on the moon were Eugene (Gene) Cernan and Harrison (Jack) Schmitt.

Before he left the moon, Cernan scratched the initials of his daughter Tracy into the lunar regolith. Since the moon does not experience weather conditions like wind or rain to erode anything away, her initials should stay there for a very long time.

All the men who have been to the moon

Related posts:
The Walking Dead: World Beyond boss promises answers about where Rick Grimes was taken after helicopter rescue
Best Christmas Gifts For Her 2020 | The Sun UK
Popular News
NASCAR's Bubba Wallace Berated By Famous Helmet Artist, 'F**k Bubba & F**k BLM'
22/10/2020
Man Utd wonderkid Ramon Calliste, called ‘the next Giggs’, now owns luxury watch business and makes £5m a year – The Sun
26/03/2020
Megan Thee Stallion Addresses Criticism Over Twerking: ‘I Love to Shake My A**’
26/03/2020
Police guard shops to stop coronavirus panic-buyers and enforce social distancing – The Sun
26/03/2020
Coronavirus: Good Morning Britain’s Dr Hilary reveals ‘game-changing’ self-testing kit
26/03/2020
Recent Posts
This website uses cookies to improve your user experience and to provide you with advertisements that are relevant to your interests. By continuing to browse the site you are agreeing to our use of cookies.Ok