U.S. reports a record 60,000 new coronavirus cases in one day

The United States reported 60,000 new coronavirus cases on Tuesday, the most ever reported in the country in a single day, according to a tally from Johns Hopkins University. That brings the total number of cases reported in the U.S. to nearly 3 million, including more than 131,000 people who have died due to the virus.

Florida on Tuesday reported more than 7,300 new cases, and its highest-ever percentage of positive coronavirus tests.

“We are seeing a significant increase in the amount of COVID cases,” said Dr. Sergio Segarra, the chief medical officer at Baptist Hospital in Miami.

Segarra worries that South Florida’s hospitals may be overwhelmed. As “CBS This Morning” lead national correspondent David Begnaud reports, ICUs at more than 50 Florida hospitals are now at capacity.

But Florida’s governor has continued to downplay concerns about the mounting infections.

“The fact of the matter is the mortality rate for people who are hospitalized now is lower than it was in March,” said Governor Ron DeSantis.

“Our mortality rate is right now at a level that people don’t talk about, but it’s down ten-fold,” he said.

However, the nation’s top infectious disease expert, Dr. Anthony Fauci, said it was “a false narrative to take comfort in a lower rate of death.”

“There’s so many other things that are very dangerous and bad about this virus,” he said.

Hospitalizations are rising in at least 22 states, and this week 28 states are seeing average positive test rates above the 5% that is recommended to safely reopen businesses. Arizona has the highest in the country, averaging 25% positivity statewide.

Texas on Tuesday once again broke its single-day record, reporting more than 10,000 new cases as officials there warned that hospitals are reaching capacity. 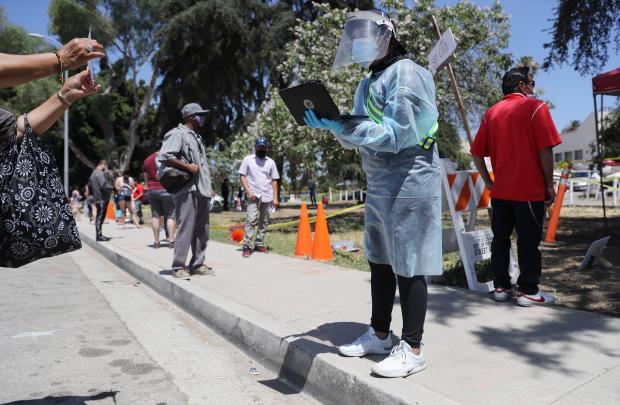 In Murfreesboro, Tennessee, outside Nashville, one father has been left with only photographs of his 30-year-old son, Darius. Pastor David Settles said Darius died Saturday, just four days after testing positive for COVID-19.

“Somebody gave it to him, and I bet you if they had known, ‘I’ll give it to this young man and he’ll die,’ they would have done differently,” said Settles.

Clusters of the virus are popping up around the country. In Missouri, one summer camp that is now closed has been linked to 82 cases.