THE search is underway to find Tottenham's next permanent manager after the dismissal of Jose Mourinho.

And there's no shortage of potential candidates with former Chelsea and Juventus boss Maurizio Sarri storming into contention. 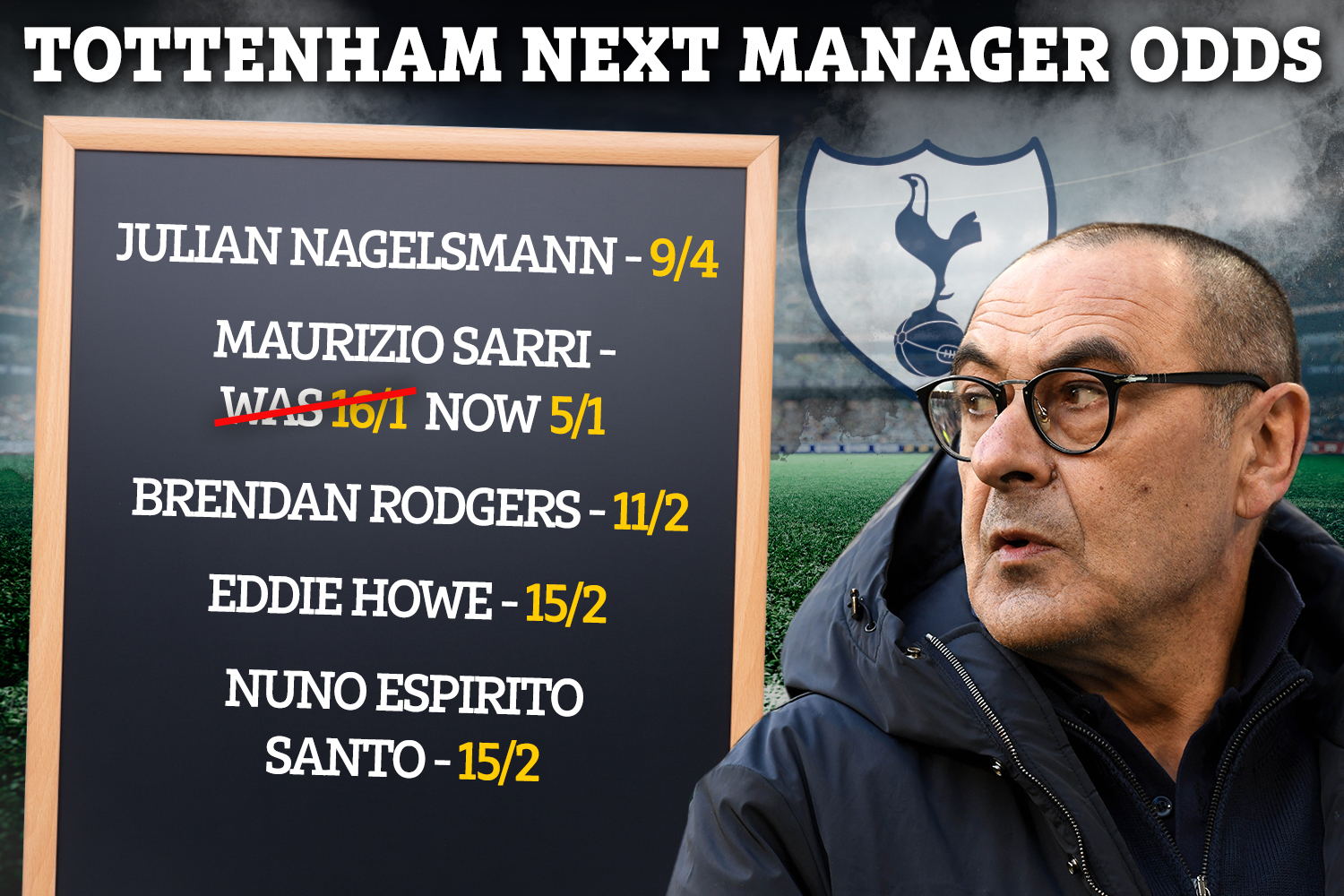 Portuguese boss Mourinho was relieved of his duties after 17 months in charge.

The 58-year-old helped the London club to a sixth-placed finish after replacing Mauricio Pochettino in November 2019.

But with the club lying in seventh and out of European competition chairman Daniel Levy made the decision to send Jose packing.

He wrote in an official statement on Tottenham's website: "Jose is a true professional who showed enormous resilience during the pandemic.

"On a personal level I have enjoyed working with him and regret that things have not worked out as we both had envisaged."

Former Spurs midfielder Ryan Mason has been placed in charge for the remainder of the 2020-21 campaign.

But who will get the job one a permanent basis?

And bookmakers Betfair agree with the 33-year-old leading the betting market at 9/4.

Nagelsmann has a growing reputation as one of the most exciting coaches in European football having taken Leipzig to the semi-finals of the Champions League in his first season in charge.

But there's fierce competition emerging in the shape of Italian veteran Maurizio Sarri.

Reports claim Tottenham chief Levy has made contact with the 62-year-old's representative, Fali Ramadani, over the last 24 hours.

Sarri left Chelsea with a 61 per cent win rate and guided the club to a Europa League triumph during the 2018-19 campaign.

He also helped Juventus to the Serie A title before being relieved of his duties in August following their elimination from the Champions League.

The Italian tactician was initially priced at 16/1 to arrive in North London as Mourinho's replacement.

But a flurry of activity in the betting market has seen Sarri's odds dramatically fall to just 5/1.

Away from the leading pair is Foxes boss Brendan Rodgers and former Bournemouth manager Eddie Howe, who are priced at 11/2 and 15/2 respectively.

Nuno Espirito Santo and Scott Parker are priced at 15/2 and 10/1 with Jurgen Klinsmann, who was a 50/1 shot last week, priced at 12s to return to the Tottenham Hotspur Stadium.

Rafa Benitez has been a free agent since leaving his role in China and is offered at 14/1 while interim boss Mason is the same price to get the role on a full-time basis.

Betfair Spokesperson Sam Rosbottom said: "Following the news of Jose Mourinho’s departure, we make Julian Nagelsmann the 9/4 favourite to take over from him and become Tottenham’s next permanent manager.

"We have seen plenty of action on this market already, with Spurs underperforming throughout the campaign and the RB Leipzig coach has been a favourite with the punters for quite some time now."