Think of the deadly items in your home. Do car keys, kitchen scales and novelty balloons make the list?

The consumer watchdog wants parents to be aware of the wide range of everyday household items that contain button batteries and the dangers these pose to small children if swallowed. 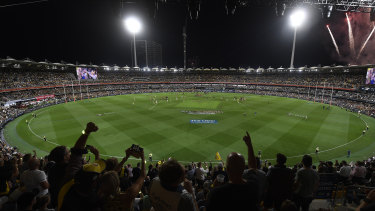 Light-up wristbands given out at the AFL grand final have been recalled because of the risk the button batteries inside them pose.Credit:Ian Hitchcock/AFL Photos

While the Australian Competition and Consumer Commission has launched a safety campaign in the lead-up to Christmas, its work on mandatory safety standards for manufacturers who make or use button batteries is unlikely to be in place before next year.

It's now expected to put recommendations for a mandatory safety code to the government in November, after earlier promising one would be delivered mid-year. Part of those recommendations will need to be agreed by states and territories.

Button batteries are round, flat batteries ranging up to 32mm in diameter. They pose a serious risk to children because if swallowed they can burn through tissue in the throat or stomach lining, leading to injury and in some cases death.

It's estimated 20 children a week are hospitalised and three children have died in Australia since 2013 after swallowing batteries.

Nevertheless, they're used to power a wide range of items including toys, remote controls, watches, digital kitchen scales, thermometers and hearing aids, along with novelty items such as light-up balloons, pens and musical greeting cards.

Choice policy adviser Amy Pereira says it can be surprising what contains button batteries. Just this past week, she found one in a light-up fluffy dog toy.

"The information on the site says it's just for cuddling, it shouldn't be chewed on – but it's for a dog, it's not going to know that," she said.

Last Tuesday, the AFL was forced to recall light-up wristbands it handed out to 30,000 fans who attended the grand final because its battery compartment was not adequately secured and the two button batteries could fall out.

ACCC deputy chair Delia Rickard said the watchdog always issued messages around button safety before Christmas and this year's campaign was its biggest.

"Awareness-raising around button batteries is something that we've done over and over again," she said.

A voluntary safety code was brought in from 2016 but there are concerns about the level of take-up.

Labor senator Marielle Smith has been pushing for a mandatory code, which the ACCC started work towards in mid-2019. Time has run out for it to be in place by Christmas but she wants to see it happen before the 2021 festive season.

"Unsecured button batteries are far too common in Australian homes and most of the time parents aren't even aware these batteries are in their homes, or of the danger they can cause," she said.

"I have my own toddler. I can think of nothing worse than him falling victim to a horrific injury like this. Our consumer laws need to keep every Australian child safe."

Ms Rickard said the new safety standards were "in the final legs, the last straight of this whole process".

"At present, the ACCC is finalising new regulations under the Australian Consumer Law for button batteries, and products that contain them, to improve their safe use. This will take into account their design, packaging and labelling," he said.

"I will work with my state and territory colleagues to progress this work as quickly as practicable."

The most important news, analysis and insights delivered to your inbox at the start and end of each day. Sign up to The Sydney Morning Herald’s newsletter here and The Age’s newsletter here.

Related posts:
The 7 Best Hand Creams For Cracked Hands
I'm horny but don't want to sleep with my man – a relationship's the death knell for sex… all women know it
Popular News
Lockdown sparks trends of hiber-dating and carpe dm-ers
01/12/2020
Man Utd wonderkid Ramon Calliste, called ‘the next Giggs’, now owns luxury watch business and makes £5m a year – The Sun
26/03/2020
Megan Thee Stallion Addresses Criticism Over Twerking: ‘I Love to Shake My A**’
26/03/2020
Police guard shops to stop coronavirus panic-buyers and enforce social distancing – The Sun
26/03/2020
Coronavirus: Good Morning Britain’s Dr Hilary reveals ‘game-changing’ self-testing kit
26/03/2020
Recent Posts
This website uses cookies to improve your user experience and to provide you with advertisements that are relevant to your interests. By continuing to browse the site you are agreeing to our use of cookies.Ok