Think adult cartoons are silly? Let me change your mind

It’s not often you will read an article in a masthead such as this recommending you go to the cinema to watch a cartoon, but gird your loins – I’m doing it. If you haven’t seen 12 seasons of the TV show Bob’s Burgers because you “have a life” or whatever, I believe the newly released The Bob’s Burgers Movie could still be for you. 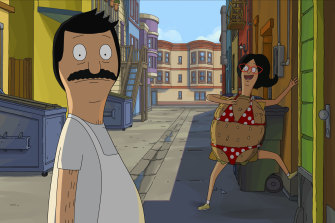 Bob’s Burgers is an animation about Bob and Linda Belcher, a quirky couple who run a restaurant called Bob’s Burgers, along with their three unique children Tina, Gene and Louise. It’s very funny and charming, full of family hijinks and jokes and songs. I was excited to see from the movie trailer that all the great things from the show had made it – including my favourite element, the Belchers’ money troubles.

Within seconds, you see Bob freaking out after he and Linda are told by the bank they have seven days to make a payment. Yes, strangely, this ingredient in the Bob’s Burgers burger is my favourite because I deeply relate to it. It is genuinely a silly and fun show, but humming along under the silliness of each episode is the very real struggle of a family living financially week to week. It’s an animated show where an unexpected life cost means the difference between our beloved characters being able to pay rent or not. It doesn’t sound that funny, but I promise it is:

“Well … one man’s trash is another man’s present for their father!” – Tina Belcher

The list of television comedies that have dealt with the realities of the working class is too short. Bob’s Burgers is one of those rare shows, and it doesn’t pull punches. Bob and Linda are often in negotiations with their landlord, late on rent. They try to make extra cash to send Tina to horse camp, her dream (and mine). Bob and Linda each take second jobs at points. Needing to unexpectedly pay a bill, Linda says, “here’s three credit cards, spread it around”. The kids understand that they can’t have certain Christmas presents because they simply don’t have enough money.

I see a lot of my own family in the Belchers (except we are human flesh). I grew up rural with parents who worked incredibly hard in blue-collar jobs to support four kids, with lots of moving rental properties and pushing my dad’s dodgy car to start every morning. As with Bob’s Burgers, no matter how hard my parents tried, the money situation couldn’t be completely hidden from the kids. But Bob and Linda, just like my parents, work immensely hard to create a safe, stable and fun environment. They are also just … really funny, all the time. The entire Belcher family combats difficulty with humour and jokes and roasting each other. Yes, it’s my parent’s fault I am like this, direct all mail to them.

In the Belchers’ totally authentic experience, it is difficult every step of the way. They are met with obstacles in a system that is designed to keep people down, and it is always one step forward, two steps back. Eleven years since we met the Belchers, money troubles are the propelling force of their movie. The fact it has been a constant, the fact that it hasn’t ever really gotten better for the Belchers, and they just keep plugging away, makes it one of the more realistic storylines on television. But funny!

I spent time following my mother in her professional field (cleaning shopping centres) but because my parents worked so hard, and encouraged me to dream bigger, I got to decide to leave that path for other opportunities. That is largely what this entire thing, and Bob’s, is about. Who gets access to opportunities and who creates them for other people.

My parents and grandparents were in situations that gave them zero opportunities. Because of them, I had a few. I got to be the first in my family to finish high school. The first to go to, and graduate from, uni. I sometimes feel guilty that in response to my parent’s generosity I took the leap into a financially unstable and insecure industry like comedy and writing, instead of something more sensible like opening a burger restaurant. But I know they are proud and happy that the hardest labour I have to do is this – typing a silly article recommending a cartoon.

The Bob’s Burgers Movie is in cinemas now.

A cultural guide to going out and loving your city. Sign up to our Culture Fix newsletter here.

To read more from Spectrum, visit our page here.