A little spring sunshine, Ma’am? The Queen, 95, appears in good spirits as she’s driven in her Jaguar X-type to Windsor Castle’s Frogmore Gardens

The Queen looked in good spirits this morning as she was spotted being driven out of Windsor Castle in bright sunshine.

The Monarch, 95, was seen being driven in her racing green Jaguar X-type through a stone arch at Windsor Castle to make the short journey to Frogmore Gardens for a morning outing.

Wearing a headscarf, sunglasses and a green wax jacket, the Queen was pictured sitting in the front passenger seat of the royal car, at one point pulling down the car’s visor to shield her eyes from the sun.

It’s thought the Queen may have been accompanying her corgis on their regular morning walk in the sprawling gardens that surround Frogmore House. 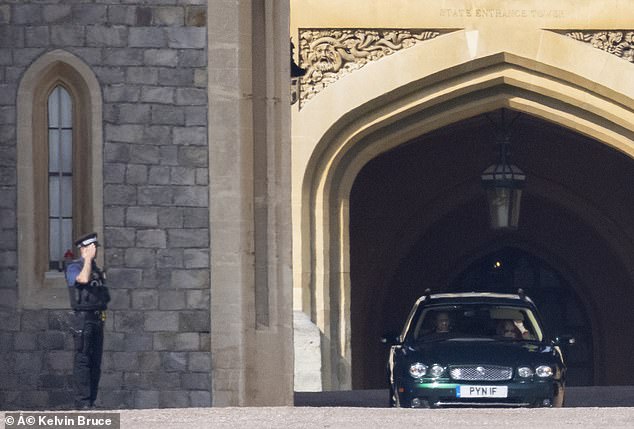 A morning outing at Windsor: A police officer salutes as the Queen drives out of the castle gates on Wednesday, the Monarch was thought to be heading to nearby Frogmore Gardens 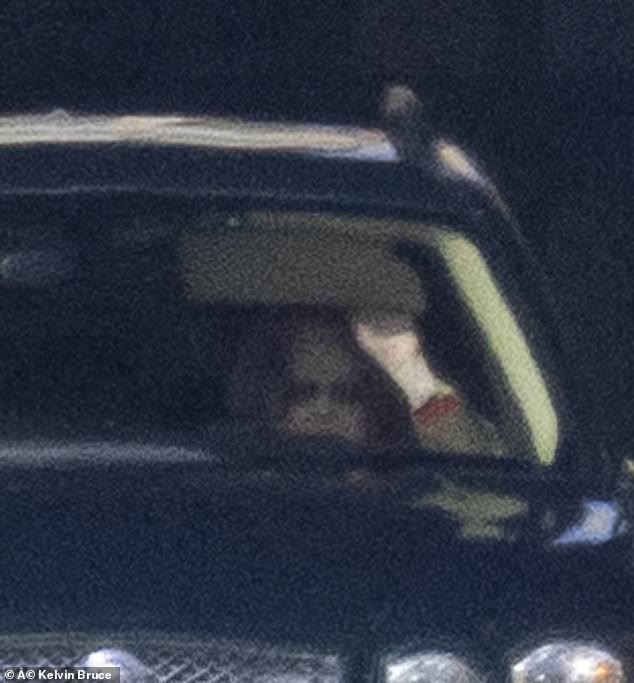 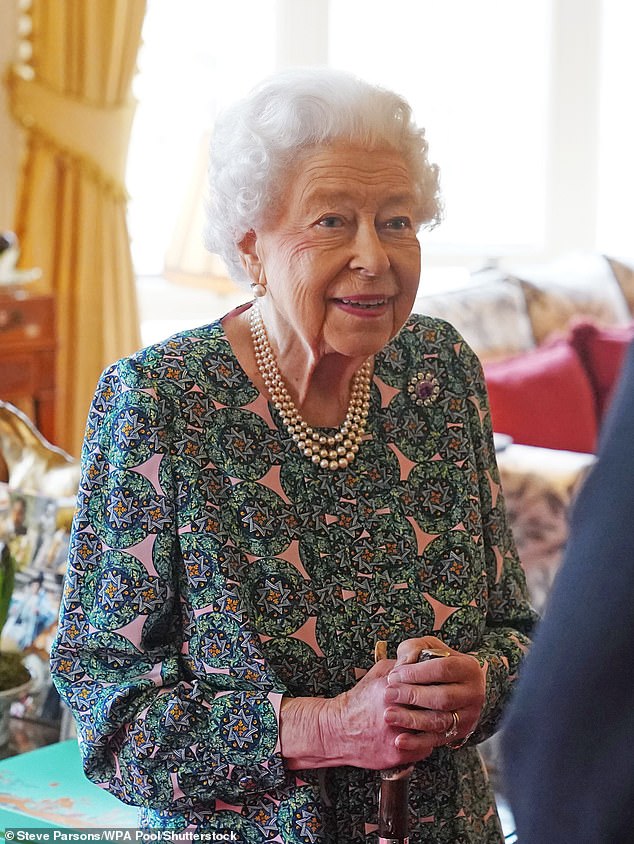 The sighting of the Queen enjoying the clement weather comes just weeks after it was revealed her busy diary was ‘under review’ due to concerns over the 95-year-old’s health (Pictured: The Queen Elizabeth during an audience at Windsor Castle last month)

It was announced last month that the Queen’s diary is currently ‘under review’, suggesting she is unlikely to ever undertake some major public engagements such as investitures again.

Sources have stressed that the 95-year-old monarch is not ill and is ‘as committed to her duties of state as ever’.

But senior royal aides – as well as the Queen herself – are understood to have accepted that the ‘frailties that come with living a long life’ are finally catching up with her.

It’s thought the 95-year-old will still attend public events where possible, but her appearances will be significantly curtailed.

That means standing on her feet for hour-long public investitures are out and they will be conducted by the Prince of Wales, the Duke of Cambridge and the instead. 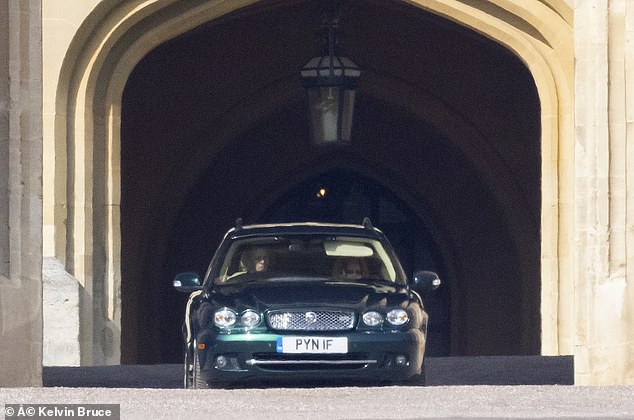 Wearing a head scarf, sunglasses and a wax jacket, the Queen looked in good spirits as she was driven out of a Windsor Castle exit 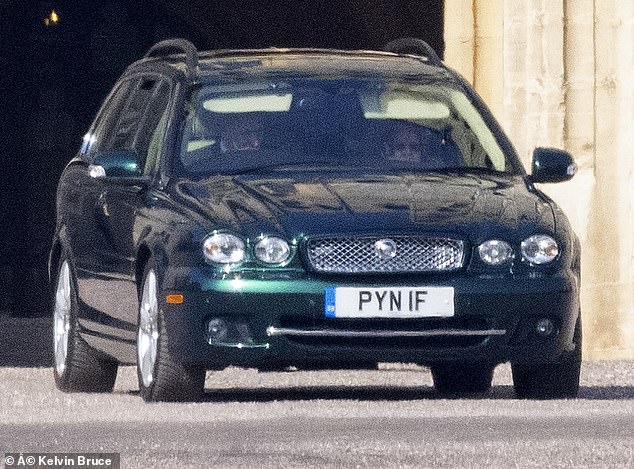 A close protection officer took the wheel of the Jaguar as it cruised under the historic arch at Windsor Castle, and headed in the direction of Frogmore Gardens 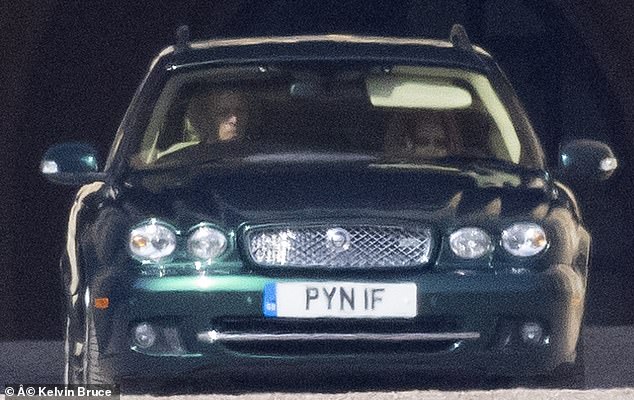 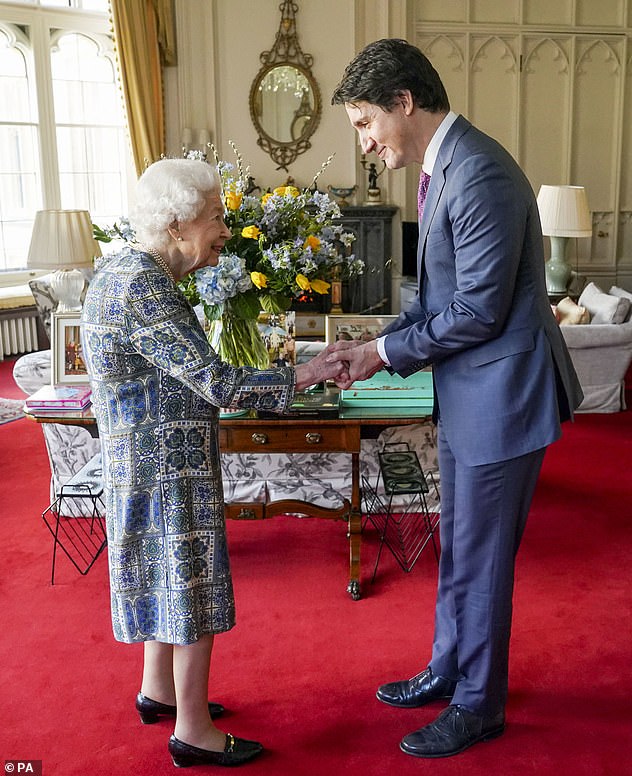 The Mail understands that the Queen – who also contracted Covid last month – is still determined to attend the service for the Duke of Edinburgh and may even be ‘pacing herself’ in public so she can. (Pictured: The Queen and Canadian Prime Minister Justin Trudeau on March 7)

A source told the Daily Mail earlier this month: ‘The Queen is still as alert, able and interested as ever but, physically, she isn’t as strong as she once was, which is entirely understandable for a woman of her age.’

Buckingham Palace has declined to comment. However, a royal source said: ‘The Royal Family understands the important role investitures play in recognising service and celebrating people’s contribution to society and there has been a real drive to catch up on the backlog created by Covid restrictions.

‘The Prince of Wales, Princess Royal and Duke of Cambridge have been leading the charge. It’s easy to envisage that they will continue in that vein but I wouldn’t rule out Her Majesty doing smaller or one-off investitures.’

The Queen was forced to pull out of the Commonwealth Day service, which takes place on the second Monday in March.

Her Majesty, who has suffered a string of debilitating health issues since last autumn and is increasingly using a walking stick, was extremely ‘regretful’ about the decision, it is understood. It would have been her first public appearance since last October.

Buckingham Palace had said she hoped to attend the service of thanksgiving for her late husband at Westminster Abbey on March 29.

The Mail understands that the Queen is still determined to attend the service for the Duke of Edinburgh and may even be ‘pacing herself’ in public so she can.