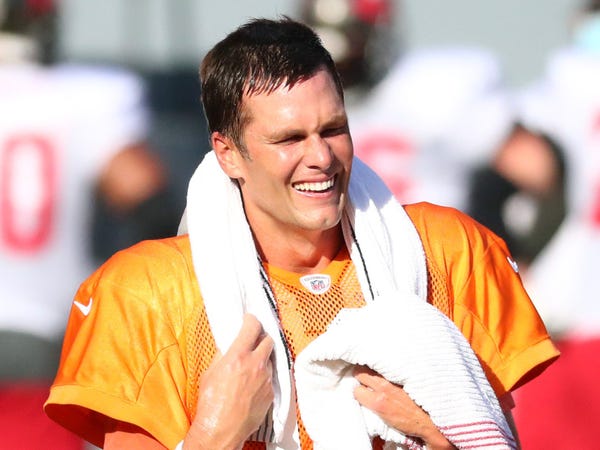 After making the biggest move of the NFL off-season, Tom Brady will make his first start with the Tampa Bay Buccaneers on Sunday against the New Orleans Saints.

But according to a report from ESPN's Adam Schefter and Jeff Darlington, there was a chance Brady could have been on the opposite sideline of Sunday's game.

The Saints had been targeting Brady as a free agent to replace Drew Brees if the longtime Saints quarterback had elected to retire in the off-season. The report said Brees was considering starting a TV career in the 2020 season. Instead, Brees decided against hanging up his cleats and returned for at least one more season with the Saints. He did, however, accept a deal from NBC to become an analyst whenever he finishes playing.

Ultimately, Brady made the move to Tampa Bay, and now the two quarterbacks will meet in Week 1 at the combined age of 84.

Both the Buccaneers and Saints are expected to be contenders heading into the 2020 season, but it's fun to imagine what could have been if Brady had would up succeeding Brees in New Orleans.

Related posts:
Who is Strike: Lethal White actor Robert Glenister?
KPCC Reporter Josie Huang Arrested While Covering Protester Arrest
Popular News
Ant and Dec wanted I’m A Celeb in north of England: ‘We pitched lots of castles'
19/09/2020
Man Utd wonderkid Ramon Calliste, called ‘the next Giggs’, now owns luxury watch business and makes £5m a year – The Sun
26/03/2020
Megan Thee Stallion Addresses Criticism Over Twerking: ‘I Love to Shake My A**’
26/03/2020
Police guard shops to stop coronavirus panic-buyers and enforce social distancing – The Sun
26/03/2020
Coronavirus: Good Morning Britain’s Dr Hilary reveals ‘game-changing’ self-testing kit
26/03/2020
Recent Posts
This website uses cookies to improve your user experience and to provide you with advertisements that are relevant to your interests. By continuing to browse the site you are agreeing to our use of cookies.Ok