The Masked Singer Crowns Its Winner

Former “RHOBH” star Brandi Glanville made her prediction back in October — and her guess was proven to be correct.

“The Masked Singer” has a new champion.

During the holiday-themed Season 4 finale on Wednesday, the Sun was crowned the winner of “The Masked Singer,” with LeAnn Rimes being revealed as the singer under the mask. 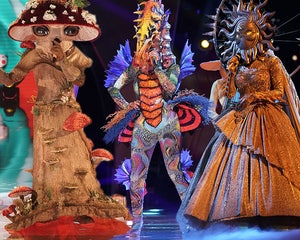 Before Rimes was announced as the winner, she and the other two finalists — Crocodile and Mushroom — performed one last song for panelists Ken Jeong, Jenny McCarthy, Nicole Scherzinger and Robin Thicke.

After the performances, it was time for the results — and the revelations of who was behind the masks.

In third place was Crocodile. While Jeong, Scherzinger and Thicke all guessed incorrectly, McCarthy’s pick, that of Backstreet Boys singer Nick Carter, was right.

Mushroom was named the runner-up. This time it was McCarthy who was wrong, as was Jeong. However, Scherzinger and Thicke ultimately chose Aloe Blacc — and they were correct.

Next up was Sun aka Rimes, who was unmasked and declared the winner by host Nick Cannon.

Like Mushroom, only two out of the four panelists — Scherzinger and McCarthy — guessed Rimes was the singer under the Sun mask, with Jeong and Thicke settling on Mandy Moore and Katharine McPhee, respectively.

Following her win, Rimes reflected on her time on the show, saying she had a “blast.”

“To be the winner, my heart is so open. It was just a beautiful experience,” she said. “I wanted to do something that I thought no one else would do. And it felt good to have the audience and the judges and everyone just really feel me and hear me for who I really am.”

“I didn’t expect this to be this much work, I have to say… It was a blast,” she later added.

Meanwhile, former “RHOBH” star Brandi Glanville — who is the ex-wife of Rimes’ husband Eddie Cibrian — reacted to the news of Rimes’ win. In fact, Glanville predicted the Sun was “100 percent” Rimes way back in October.

“I think the sun is 100 percent Leann Rimes #maskedsinger,” Glanville tweeted at the time. “Although my kids say no way because she told them that she would never do this show because its [sic] sooo beneath her.”

Ahead of the finale, Glanville doubled down on her prediction, writing, “Hope my kids’ bonus mom The Sun Leanne Rines [sic] wins the masked singer tonight #Spitfire.”

“I want to say it but I won’t because I’m on NyQuil with a sore throat …it’s not over until the masked lady sings,” she quipped.

Related posts:
SpaceX launch aborted: Spy satellite mission scrubbed less than 2 minutes before lift off
'Blue Bloods': Danny Reagan Might Stop Being a 'Rogue Cop' Because of Protests
Popular News
Coronavirus symptoms: The most common symptoms in hospital admissions – ranked
19/01/2021
Man Utd wonderkid Ramon Calliste, called ‘the next Giggs’, now owns luxury watch business and makes £5m a year – The Sun
26/03/2020
Megan Thee Stallion Addresses Criticism Over Twerking: ‘I Love to Shake My A**’
26/03/2020
Police guard shops to stop coronavirus panic-buyers and enforce social distancing – The Sun
26/03/2020
Coronavirus: Good Morning Britain’s Dr Hilary reveals ‘game-changing’ self-testing kit
26/03/2020
Recent Posts
This website uses cookies to improve your user experience and to provide you with advertisements that are relevant to your interests. By continuing to browse the site you are agreeing to our use of cookies.Ok