Home » Lifestyle » The best Easter events in London this week, featuring free boating on the Thames

The best Easter events in London this week, featuring free boating on the Thames 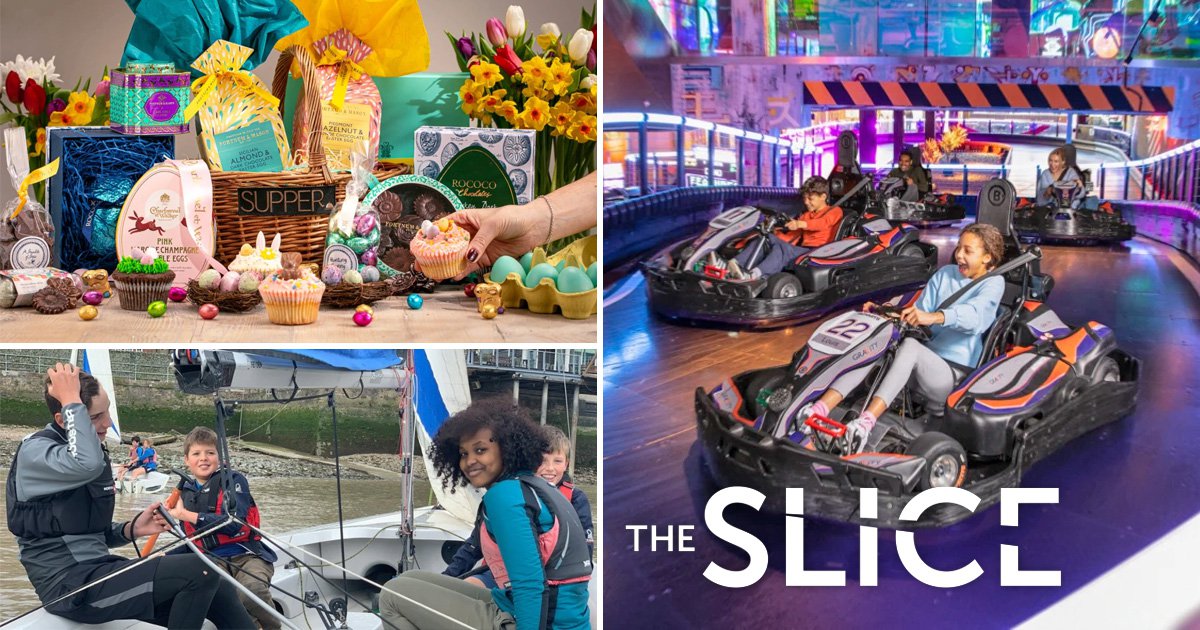 People think of Christmas as the food-fest but it’s actually Easter where you get to release your inner piggy, with so many mostly sweet treats on offer, you can actually feel your blood sugar levels rising as you eat.

But it is only once a year so get stuck into Cadbury Mini Egg-flavoured doughnuts and Disco Brunches and hot cross crumb macaroni cheese all washed down with signature cocktails and 20 beers on tap.

Ahead, we round up the best Easter events in London this week.

Cam and get it

With the weather set to be pretty good for Easter (can that be right?), what better way to spend the biggest Bank Holiday extravaganza of the year – four days people, including the weekend! – than wandering around Camden Markets, picking up a pancake from To Home from London, and decorating an Easter basket at clothing workshop Josiah Amari?

What about egg decorating, getting any kids you may have been lumbered with involved in a Scavenger Hunt in between them marveling at stilt walkers and getting faces painted, picking up a purple carrot cake ice cream at Chin Chin Labs, tucking into hot cross crumb macaroni cheese at The Mac Factory… The only problem, where to begin?

Are you between the ages of ten and 23 and like mucking about on the river? Know someone who is/does?

Then your boat just came in as if you get down to Pimlico this Easter Sunday you get to join in on the sailing, powerboating, kayaking action and get a Youth Membership – worth £15! – for free! Boom! (Are people still saying ‘boom’?)

It’s a charity thing, an organization set up to encourage anyone from any background to get stuck into watersports right there on Old Father Thames.

And it’s not just on the day: with your membership you get access to evening sessions, summer courses and away trips.

So slip on your stripey Breton top and say ‘aye aye cap’n’ to fun.

Start lining your stomach with hot cross buns and Easter eggs now because it’s going to be a big weekend down at Truman’s Social Club in Walthamstow, where they’re kicking off with an all-day party featuring music from the 1980s, 1990s and 2000s lubricated with cocktail deals and 20 beers on tap!

Cooling things down a little for the Sunday, there’ll be a free kids Easter egg hunt (while you take the edge off at the bar, presumably) followed by a special roast dinner with live jazz, which gets ramped up to a DJ as the afternoon wears on.

Well, it’s not a school night, is it? Our livers hurt just thinking about it.

Out of the box thinking

It’s a lot, Easter, isn’t it? Four days of foods and drinks to think about. But you know it’s not too late to treat yourself to one of those home boxes, where you get everything delivered to your door.

We’re thinking Rick Stein’s Easter Meal Box, direct from Cornwall to wherever you are these days, which contains steamed scallops with soy and ginger, sea bass with vanilla vinaigrette and new potatoes and lemon tart with clotted cream to which you can add a bottle of white Burgundy.

Or – don’t know why we’re saying ‘or’, when we mean ‘and’ – you can go for the Ultimate Hot Cross Bun Afternoon Tea box with quiches, sausage rolls, cakes, buns and chocolate eggs. Yes, please!

Have you forgotten to send out your Easter eggs? That is so like you at the moment!

Listen, don’t worry about it, you can still get the likes of Fortnum & Mason, Rococo Chocolate and Hummingbird Bakery goodies – so none of your rubbish – direct to their doors (or yours) thanks to SUPPER London’s delivery service (they’re calling it ‘eggs-clusive’ but we’ve promised ourselves not to go there).

And because they use technology-advanced Japanese bikes to get your chocs ‘n’ stuff around town, they can guarantee that they will arrive in perfect condition, without so much as a bite taken out of them.

Online delivery to your door

Nothing goes together quite so well as avocado on toast and the collected works of Gloria Gaynor and Kool And The Gang.

Well, that’s the kind of thing we’re expecting down at the Disco Brunch they’re throwing at Devonshire Terrace, where your flash-grilled steak and eggs, crispy duck salad and bottomless cocktails or fizz will be accompanied by disco balls, smoke machines, glitter and maybe some Hot Stuff by Donna Summer or the finest Evelyn ‘Champagne’ King has to offer.

Whether you’re inside or out on the terrace, be sure to wear something sparkly, shoes that are made for dancing and best underwear only.

If there’s one venue created especially for Easter, it’s Creams Café where the emphasis is always on the sweet and the tasty and the creamy so it’s no surprise that stops are being pulled out as we speak.

First up is their Easter Waffle piled high with salted caramel gelato and Belgian chocolate shavings and a Maltesers bunny (why not?), then there are the Easter Doughnuts, one of which is Cadbury Mini Egg flavoured, and obviously very healthy.

Then there’s the Maltesers Bunny Doughnut because this lot’s mums clearly never told them they could have a cake or a sweetie but not both. We’re already deep in diet mode. Or ‘training’ as we call it.

They call it a ‘three-storey department store of fun’, which we think pretty much sums up Gravity Wandsworth, and who knew they’re thinking of taking things to the next level this Easter with a Scavenger Hunt around the whole of Wandsworth, where you can win a golden ticket to Gravity!

Clues posted on their Instagram page each day will lead you to various locations in the hope of getting your hands on the opportunity to sample the eight immersive experiences on offer at Gravity: electric go-kart racing, augmented reality bowling, digital darts, Funbox arcade… and that’s only four!

But get to that Instagram page now as there are already a couple of clues up there!