AFTER months under lockdown we are crying out for a change of scene.

But it’s no good swapping those same four walls for below-average new views. Thankfully, the UK boasts plenty of hotels with stunning outlooks worth a post-lockdown trip away from home. 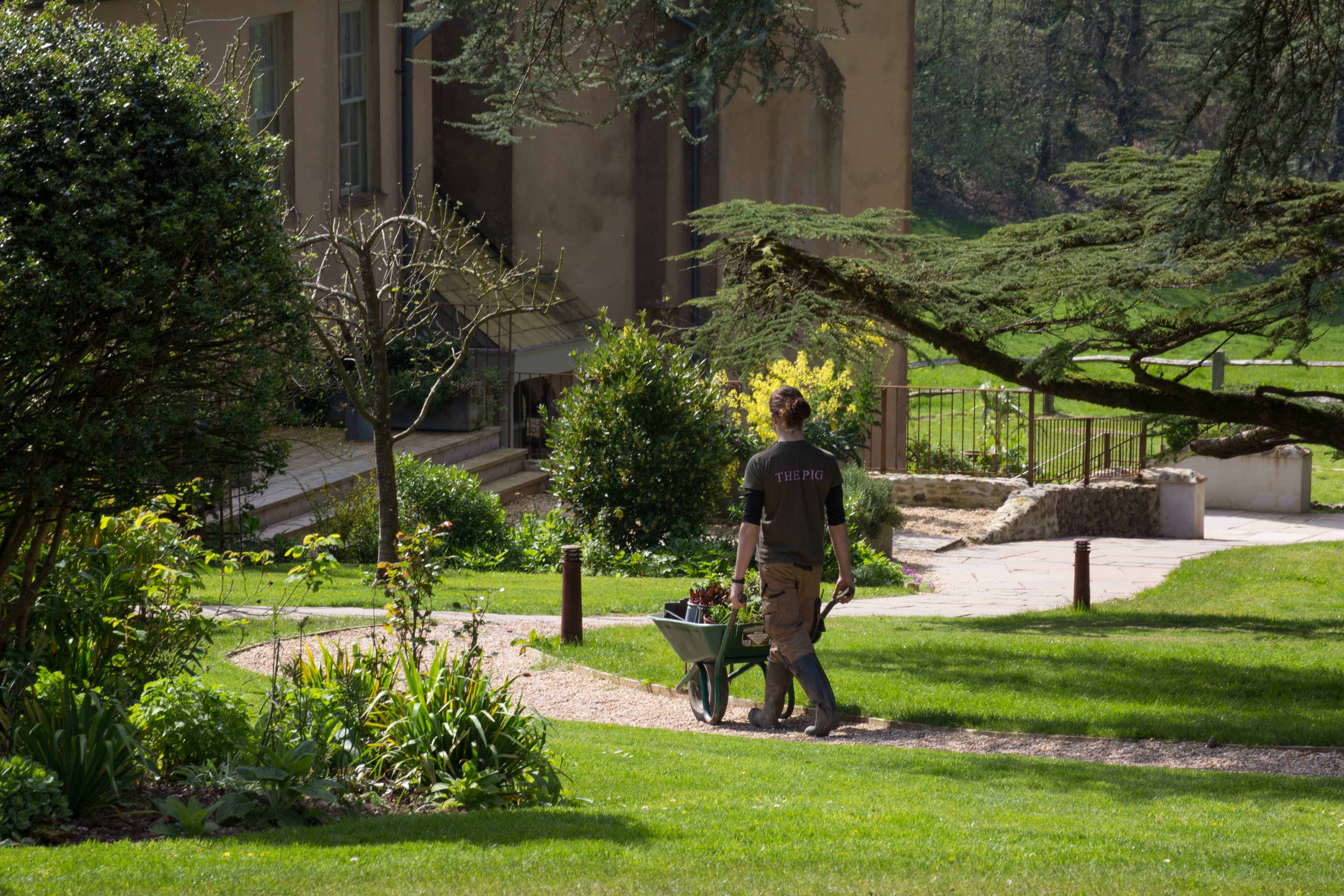 With many opening up in England from July 4 and Scotland from July 15, we asked Richard Fraiman, editor of The Good Hotel Guide, to come up with his top ten favourite hotels in locations that offer awesome views.

From England’s only mountain forest, to sea views on the Isles of Scilly, here they are.

TUCKED away in the Otter Valley village of Gittisham, at the end of a mile-long drive, this Grade I listed, honey-stone Elizabethan manor house is part of the burgeoning Pig boutique hotel group.

Some rooms have a free-standing bath under the window so you can enjoy the view as you soak.

The walled kitchen garden and Victorian glasshouses supply produce for the kitchen, lemons for your vodka and chillies for bloody Marys in the bar.

Step through the infusion and herb gardens and you find the Potting Shed treatment rooms.

A night room-only is from £87.50pp based on two sharing. See thepighotel.com.

YOGA retreats are a regular feature at this 18th-century manor-house- turned-hotel, approached by a tree-lined drive, amid the wilds of Dartmoor near a spot called Two Bridges. 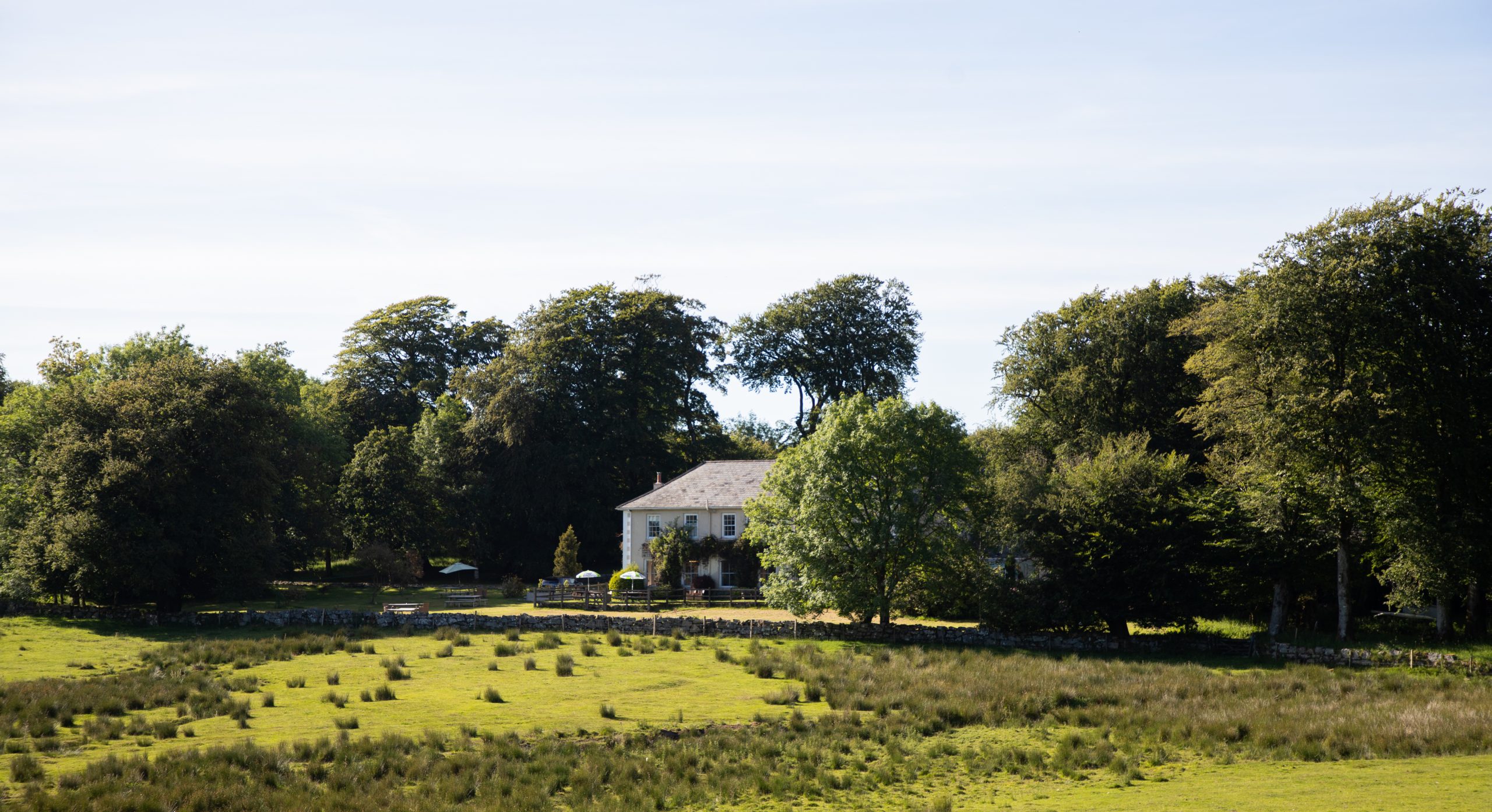 In the 19th century, Arthur Conan Doyle stayed here and, it is said, was inspired by the untamed moorland landscape to write The Hound Of The Baskervilles.

Dogs that are friendlier than that hell hound are today welcomed by proprietor Chris Daly.

The house has a welcoming, lived-in feel – perfect for relaxing.

One night’s B&B is from £88pp based on two sharing. For more info see princehall.co.uk.

COTTAGE IN THE WOOD, CUMBRIA

THE address is Magic Hill, in Braithwaite, and the location is certainly spellbinding – at the heart of Whinlatter, England’s only mountain forest. 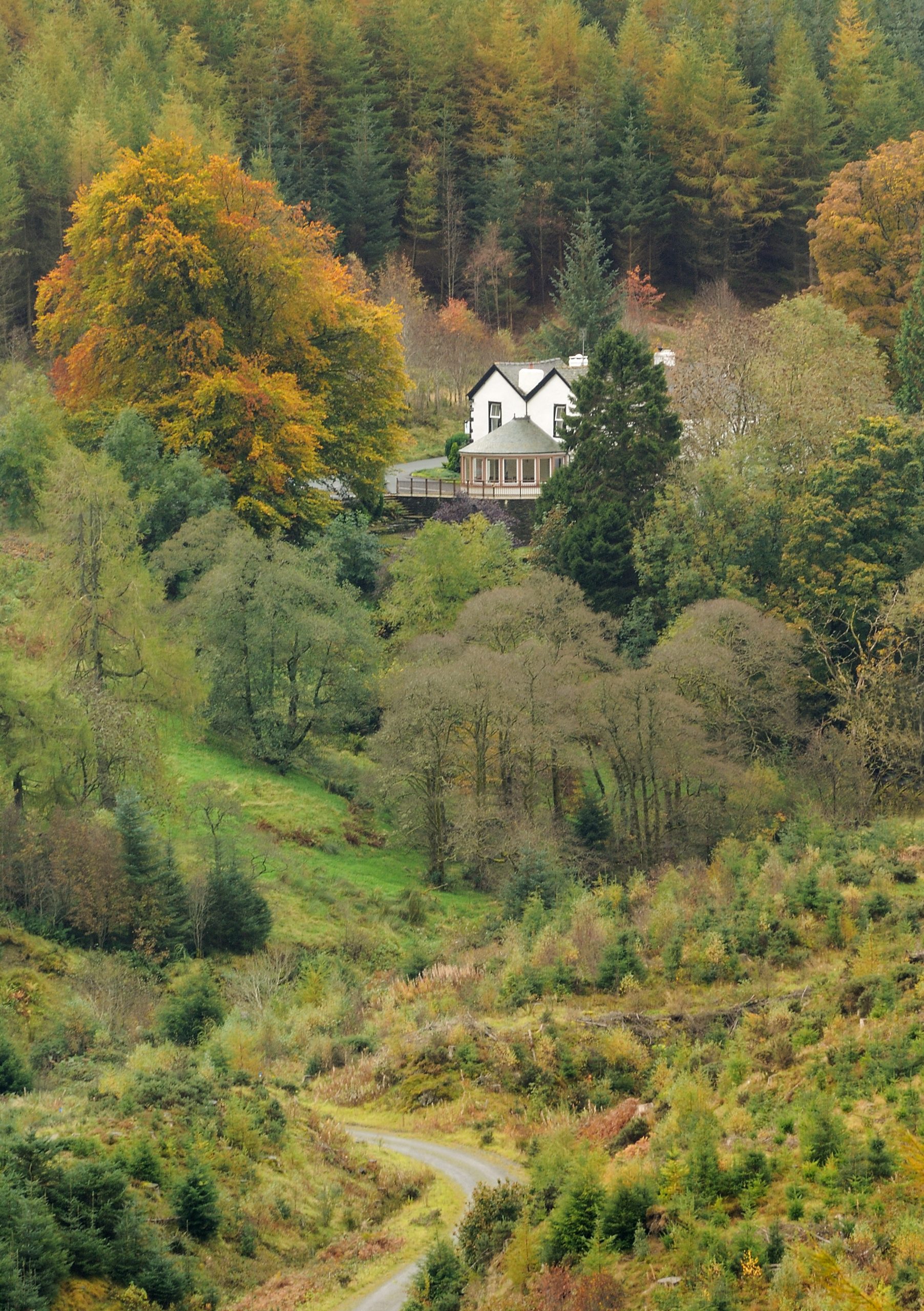 The cottage dates from 1640 and, now extended, is run as a restaurant-with-rooms by Kath and Ian Berney, with just nine guest bedrooms.

Oak and Ash have wonderful views to the Skiddaw mountain range, plus a spa bath. Garden Room has its own access into the garden.

There are views to Skiddaw, too, from the Michelin-starred eyrie dining room with wraparound balcony. Guests drift to sleep to the sound of a beck running by, and awake to a chorus of birdsong.

One night’s B&B is from £115pp based on two sharing. See thecottageinthewood.co.uk.

ON Bryher, the smallest of the inhabited islands of Scilly, on a rugged coastline lapped by the Atlantic, the UK’s most westerly hotel has 25 bedrooms and suites, each with private terrace or balcony, dispersed through the grounds. 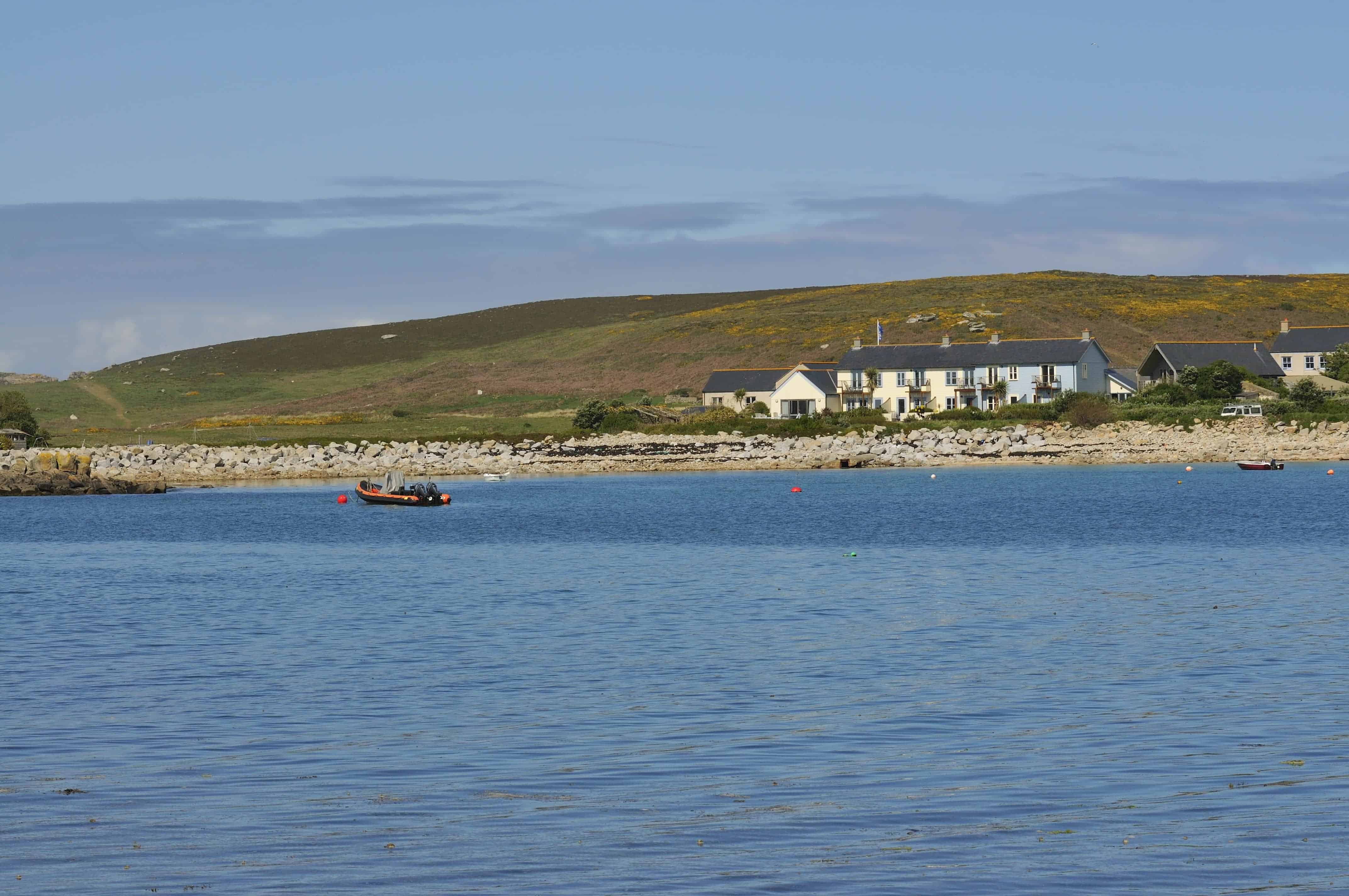 Each has Lloyd Loom furniture, and paintings by some of Cornwall’s leading artists.

The sandy beaches on the east side are a stroll away. Order a drink on the Sunset Deck and dine on crab, scallops and mussels in the Crab Shack.

One night’s B&B is from £95pp. For details see hellbay.co.uk.

WITH a name that appropriately means Head of the Valley, this stone rectory in flower-filled gardens, with views to the Welsh hills, is run by the Hunter family as a country house hotel in the town of Oswestry.

The beautiful, rolling countryside of the Welsh Marches attracts walkers, who stay time and again.

Some bedrooms have a spa bath, while some, on the ground floor, have French doors to a private patio.

The food is highly rated, with vegans catered for, morning and night.

One night’s bed and breakfast is from £75pp – visit peny.co.uk for more details.

OVERLOOKING a garden with a splashing fountain, in 17 acres of wooded grounds stretching down to Rutland Water, Stefa and Tim Hart’s luxury country house hotel in the village of Hambleton was built in 1881 as a hunting lodge. 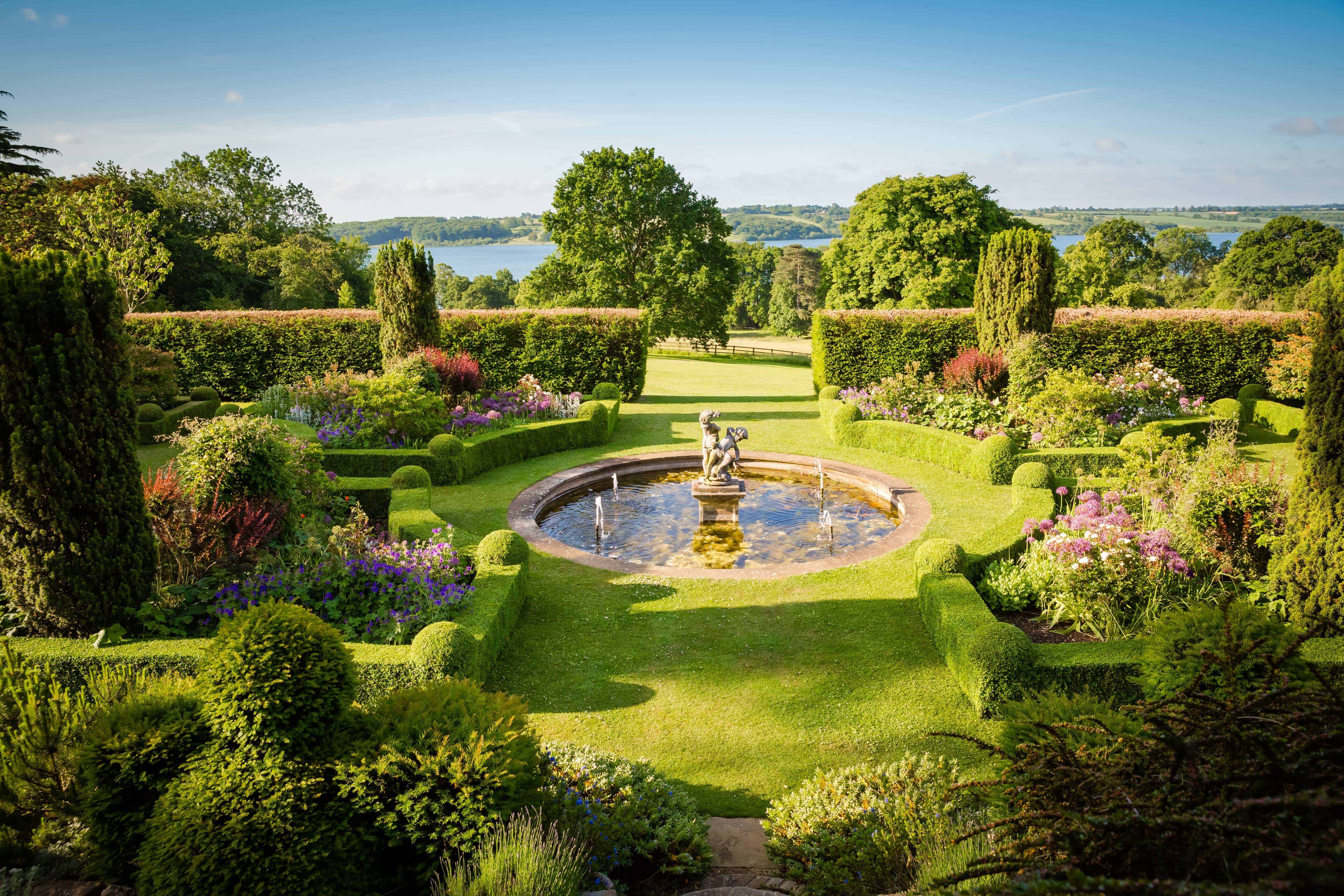 The words “Fay ce que voudras” (do as you please, in old French) are carved in- to the entrance porch, while “Nune hora bibendi” (now is the hour for a drink, in Latin) is on a sundial, and this is indeed a place to unwind.

You can take a dip in the outdoor pool or tea on the south-facing terrace, enjoy Michelin-starred cuisine, and awaken in a room with a lake view.

One night’s B&B is from £147.50pp based on two sharing. See hambletonhall.com.

THIS former mine captain’s house stands on a hillside in the Tamar Valley, on the Devon-Cornwall border, just a short drive from Tavistock and Dartmoor, offering glorious vistas from the terrace, where you can dine alfresco when the sun shines. 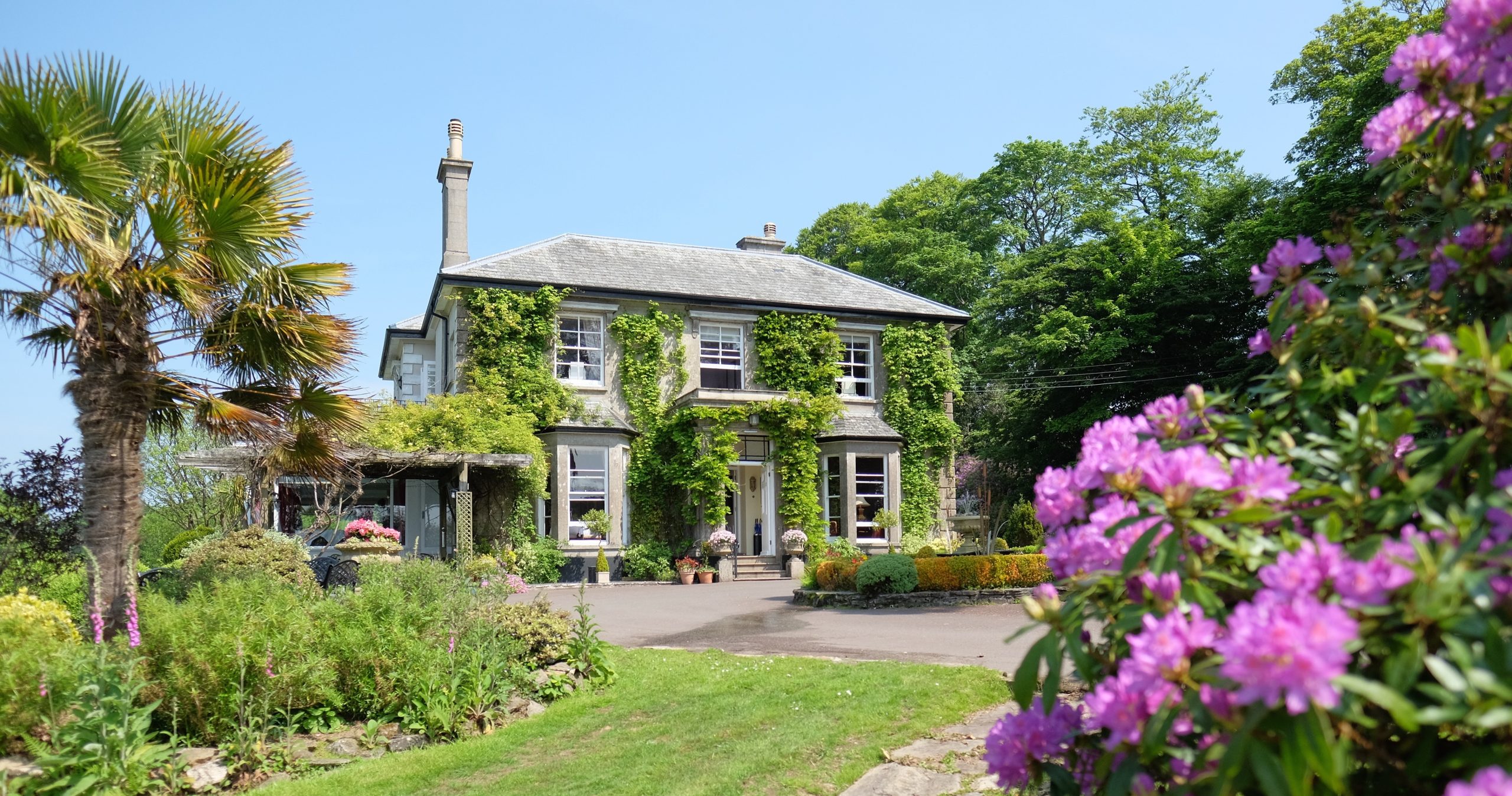 Two main-house bedrooms have a huge balcony, plus a bathroom with roll-top or sunken bath and walk-in shower.

Some dog-friendly rooms in coach-house annexes have a balcony or patio overlooking the walled garden.

The styling is modern, the view timeless, the Devonshire cream tea not to be missed.

One night’s B&B is from £65pp based on two sharing. See thehornofplenty.co.uk.

THE words “middle of nowhere” take on real meaning as you alight at Rannoch Station to find yourself in one of Europe’s last great wildernesses. 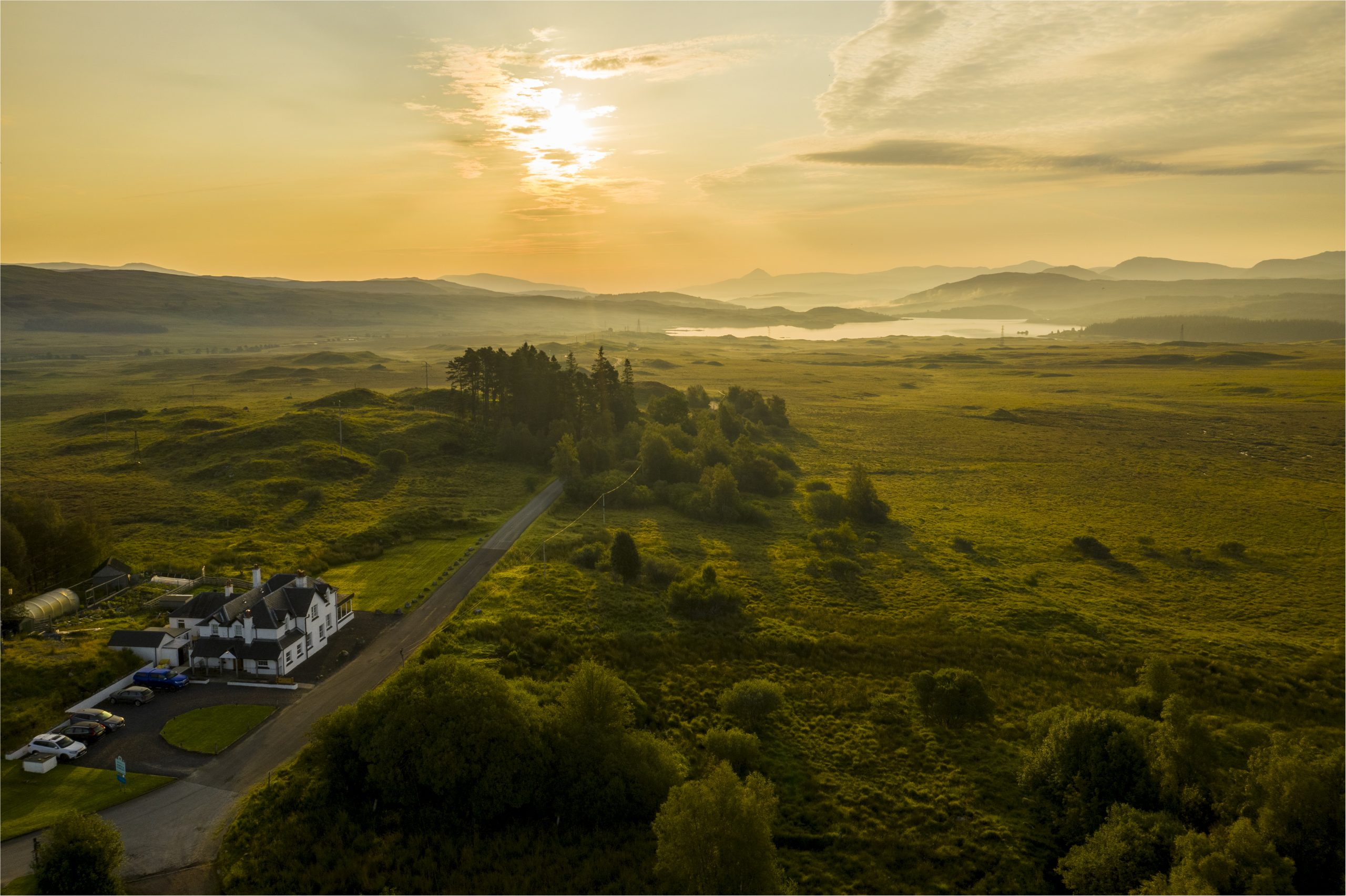 The landscape of lochs and lochans – or small lochs – peat bogs and rivers, is home to roe and red deer, grouse and curlew, with distant views to Schiehallion, the Fairy Hill of the Caledonians, and the mountains of Glen Coe.

There is no wifi or mobile signal, but in Stephanie and Scott Meikle’s restaurant-with-rooms, a warm bedroom with oatmeal biscuits and a nip of malt whisky awaits, before a dinner cooked by Stephanie and a night under a black, star-spangled sky.

One night’s B&B is from £90pp based on two sharing. Visit moorofrannoch.co.uk for details.

ON a 26,000-acre estate with lawns lapped by Loch Gairloch, approached by a single-track road, Nick and Charlotte Dent’s refurbished Victorian hunting lodge, ­ now a hotel – cannot fail to impress. 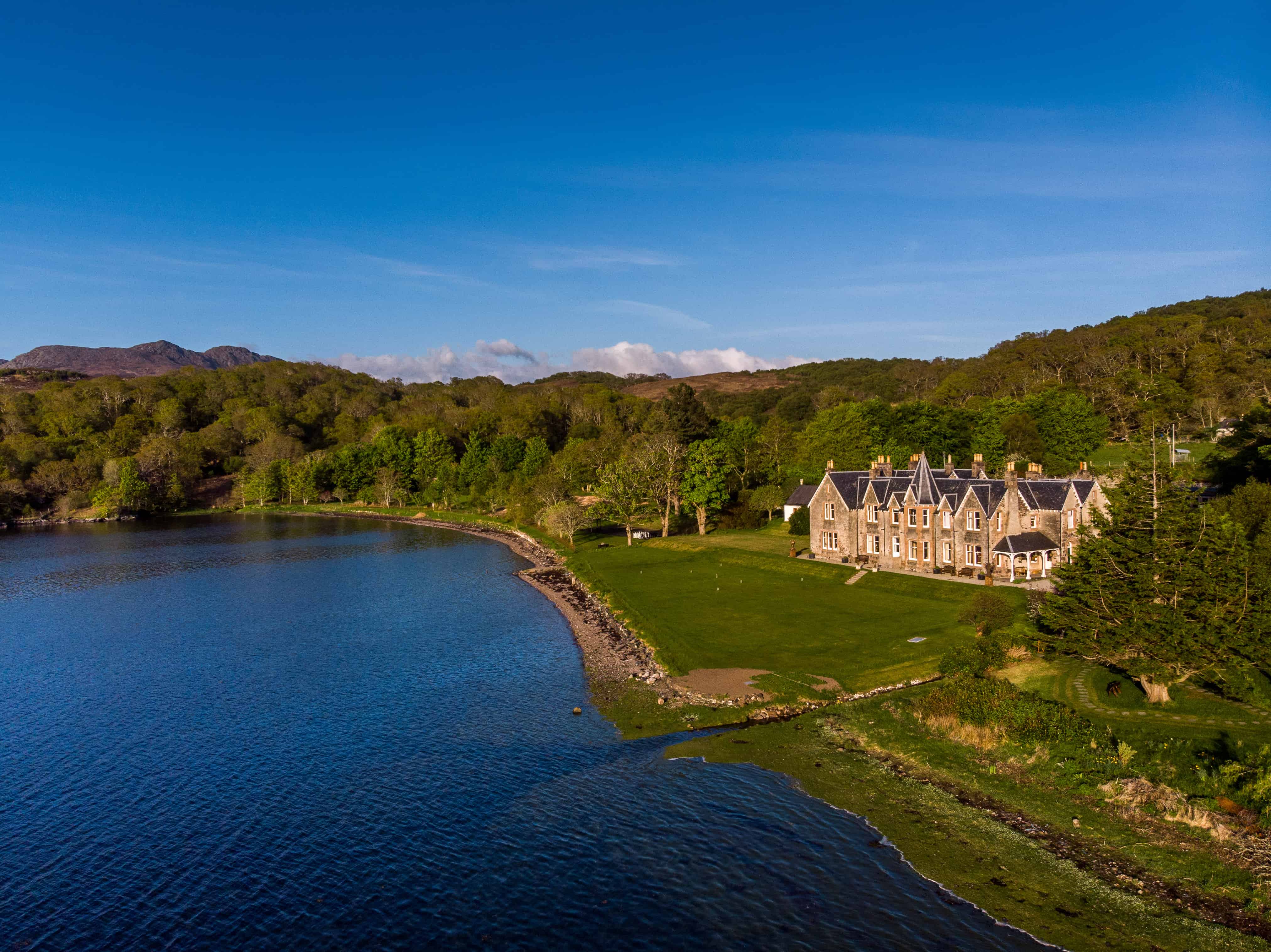 A fire burns merrily in a bar stocked with 300 whiskies.

Bedrooms, some with loch views, are furnished with antiques and supplied with such extras as fresh milk and homemade shortbread.

The dinner menu is a showcase for locally farmed produce, loch fish and shellfish and home-grown vegetables.

You can go boating, fishing, pony trekking, or just wander in the gardens and drink in the scenery.

One night’s B&B is from £65pp based on two sharing. See shieldaiglodge.com.

SEQUESTERED in the Vale of Ewyas, in the Black Mountains, this hotel with its Grade I-listed medieval tower stands in the precincts of a ruined Augustinian abbey. 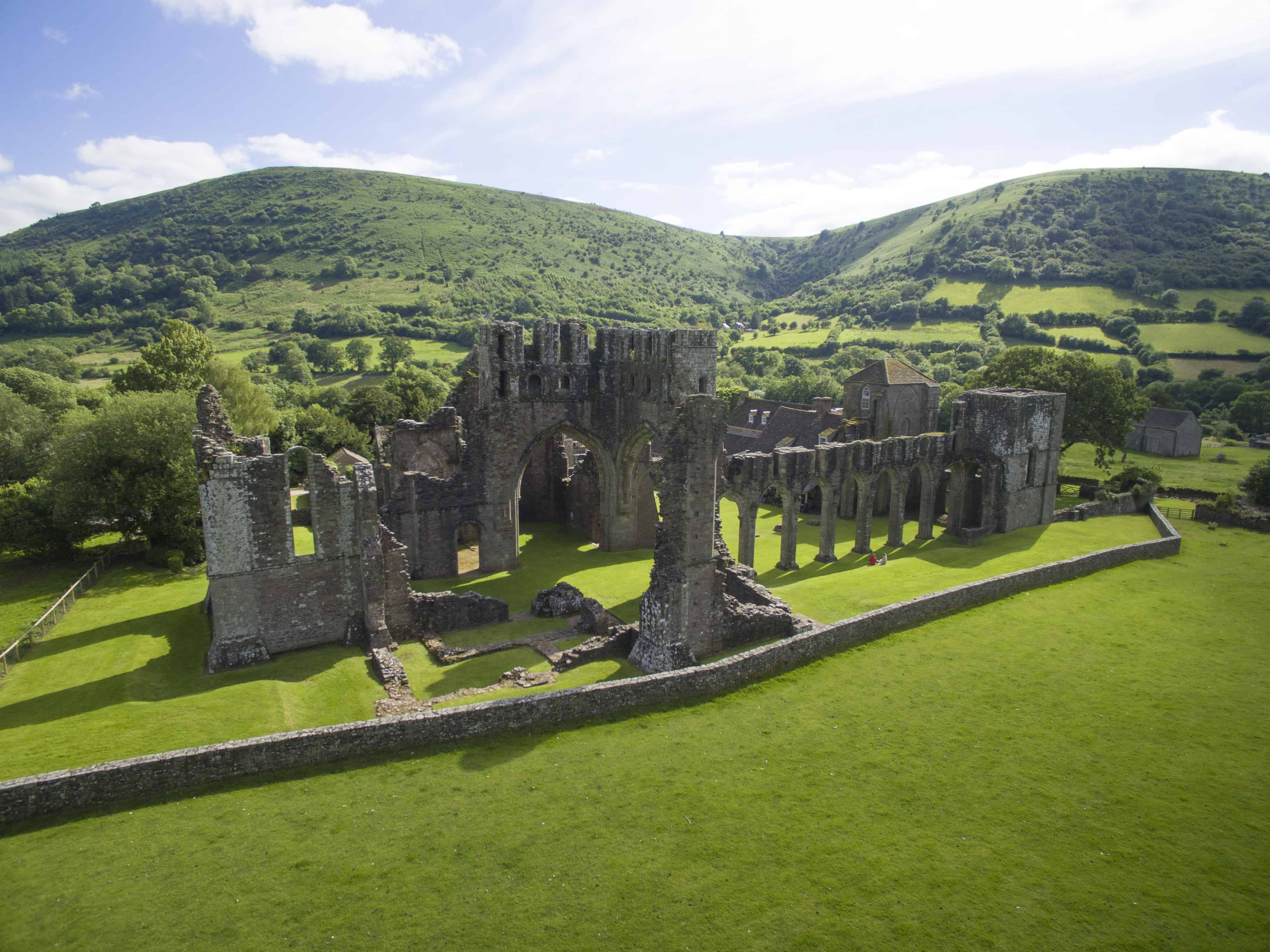 Achingly romantic, it was painted by JMW Turner. The accommodation is austere, in keeping with the building’s 12th-century origins.

Four bedrooms, approached by a spiral staircase, share two shower rooms on the floor below.

There is no wifi, no mobile phone signal, just perfect peace.

Llanthony is the perfect base for those walking, cycling or trekking. And later, guests can dine on beef casserole and other delicious dishes in the hotel’s restaurant.

One night’s B&B is from £47.50pp based on two sharing. See llanthonyprioryhotel.co.uk.