Plans are in place to increase global coal capacity by almost a third of the 2019 total despite global ambitions to abandon it to reduce greenhouse gas emissions and meet the Paris Agreement goal of limiting global warming to 1.5 degrees.

The Mount Arthur coal mine near Muswellbrook in the Upper Hunter.Credit:Janie Barrett

The new coal capacity of 2277 million tonnes per annum, which includes both mines planned and those under construction, runs contrary to the International Energy Agency’s roadmap to global net zero emissions by 2050, which shows the world would need to reduce capacity by 11 per cent a year over the coming decade to hit Paris Agreement targets.

If all 432 new mines developments and expansions went ahead without unprecedented cutbacks in existing production over the next decade, proposed capacity could boost supply to over four times a 1.5 degrees-compliant pathway, according to a survey of the industry published on Friday by Global Energy Monitor, a United States-based environmental organisation.

Australia is one of the four nations with the biggest plans for new coal development, along with China, India and Russia. Together the four nations have 1750 million tonnes of coal mine capacity in the pipeline, or over three-quarters of the global total.

The world’s largest energy conglomerates, such as Glencore, Mechel, and BHP, remain invested in new mines and mine expansions, though small and independent firms have shown the greatest appetites for new projects, especially in Australia and Russia.

About 70 per cent of the new coal capacity planned is for thermal coal used to make electricity, rather than metallurgical coal that is needed for steel production. Should the capacity come online, it would produce as much greenhouse gas emissions as the United States.

The report’s chief author Ryan Driscoll Tate said demand for coal is plummeting and financing for new coal projects is drying up.

“New mines and expansions of existing mines will be producing coal for a world in which coal is unviable economically and untenable for the environment,” he said.

The report comes as the Group of Seven wealthy nations increases its efforts to step away from coal. In May the G7 announced its members had agreed to end international finance of coal projects that emit carbon by the end of the year and to phase out all fossil fuels. 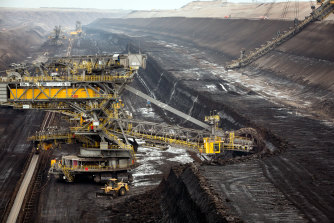 The declaration was considered significant because it included the support of Japan which has wavered on the issue, and because it was made in the weeks before the coming G7 summit on June 11, to which Australia has been invited even though it is not a G7 member.

United Kingdom Prime Minister Boris Johnson, who is the host of both the G7 summit and this year’s COP26 climate talks in Glasgow, is expected to use the summit to push for increased climate action, particularly from Australia which is yet to announce a more ambitious 2030 emissions reduction emissions target.

The COP26 president Alok Sharma said in a speech in mid-May, “If we are serious about 1.5 degrees, Glasgow must be the COP that consigns coal to history… we are working directly with governments, and through international organisations, to end international coal financing. This is a personal priority. And to urge countries to abandon coal power, with the G7 leading the way.”

Prime Minister Scott Morrison has emphasised Australia’s preference to get to net zero by 2050 and the government’s so-called technology roadmap to achieve emission reductions without increasing taxes.

A UK government official told the Sydney Morning Herald and The Age on Friday that Australia’s policies were not viewed as credible in climate diplomacy circles.

“You can have a roadmap to lose 10 kilos in six months, but if you’re not exercising now and if you’ve got no plans to start, it’s really hard to see how you are going to get there.”

She said Japan’s support for the G7’s declaration was particularly significant for Australia because it signalled a shift away from coal for Australia’s biggest coal customer.

Japan imports 170 million tonnes of coal each year, around 60 per cent of it from Australia, and burns around twice as much Australian coal as Australia does, according to a new report released by the Australia Institute this week.

Japan has 162 coal-fired power plants operating and a further 16 are planned for the future.

At a US-Japan Leaders’ summit in April, US President Joe Biden and Japanese Prime Minister Yoshihide Suga signed the US–Japan Climate Partnership on Ambition, Decarbonization and Clean Energy Japan announced it would cut its GHG emissions to 46 per cent below 2013 levels by 2030, with the aim of achieving a 50 per cent reduction.

Get a note direct from our foreign correspondents on what’s making headlines around the world. Sign up for the weekly What in the World newsletter here.