How coronavirus cancelled our wedding: She had bought the dress and planned the party, but her marriage plans are now in ashes. Worse, her intended has cancer. Yet, in this moving piece, SUE REID still finds plenty to laugh about 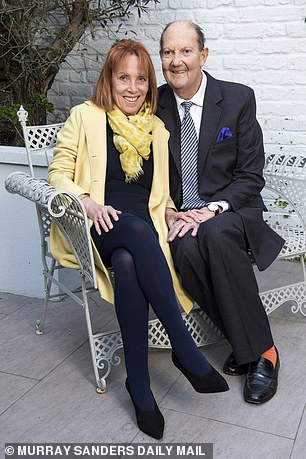 Ten days ago, the family began begging us to call the nuptials off because of the danger to Nigel of going out anywhere and catching corona

By now we should be Mr and Mrs. Last Friday we were to have been married.

My dress had arrived from a smart online shop, and Nigel had new yellow braces to hitch up his wedding suit after losing two stone since cancer struck him in January.

Then came Boris’s edict that weddings are off. It was followed by an email message from Chelsea Town Hall, a short walk from home, that our ceremony was cancelled.

Lisa, the registrar, asked us to set a new date in the future. We said yes and the new navy dress was put away in the wardrobe.

How long it will stay there is anyone’s guess. And we remain, after almost a decade together, just partners.

It was the cancer that got us talking about marriage. It led to my Leap Year proposal at just past midnight on February 29 to end what now seemed our ‘flimsy’ relationship status.

At Nigel’s first chemotherapy session three weeks earlier, I had been given a cursory glance by the nurse.

A fortnight later at the next one, he fell ill with a serious infection. A doctor called to alert me that he was going to hospital, asking: ‘Who are you, exactly?’

I felt, perhaps wrongly, that I was being viewed as a usurper because I didn’t have a ring on my finger.

I did not tell the doctor that we were planning to marry. Soon after the first chemo session, we had filled in forms at the Town Hall, produced our passports, certificates showing our current marital status (me a widow and he a long-time divorcee) to prove we were free to wed, both genuine British citizens and not concocting a sham marriage. 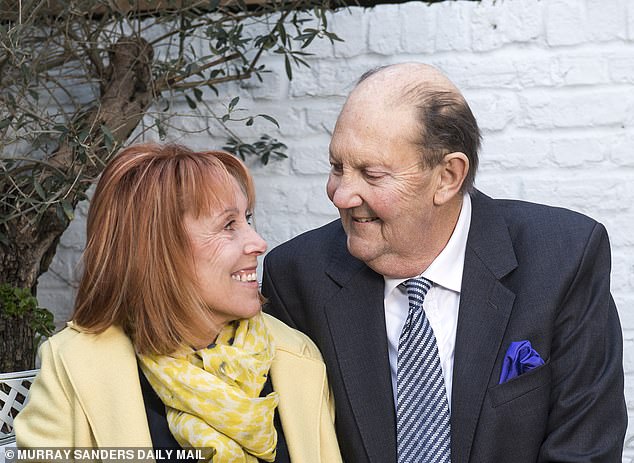 By now we should be Mr and Mrs. Last Friday we were to have been married. My dress had arrived from a smart online shop, and Nigel had new yellow braces to hitch up his wedding suit after losing two stone since cancer struck him in January

The registrar insisted we turned up in person and be interviewed separately, just to be sure we were genuine. By then, the coronavirus was sweeping across Europe towards this country.

It was a risk for Nigel, whose immunity to infection is nil thanks to his cancer treatment, to go there at all.

But we had hope in our hearts.

Our family, my brother and his doctor wife, my son Harry and his delightful girlfriend Laura, Nigel’s daughter, Charlotte, her husband, their toddler daughter and a new baby of a few weeks, were coming to a special dinner at home after the ceremony. Those plans lie in ashes.

Ten days ago, the family began begging us to call the nuptials off because of the danger to Nigel of going out anywhere and catching corona.

Because he is so vulnerable, they could already only wave at us through the window and leave food, a home-cooked cottage pie or packet of the ginger biscuits he loves, on the doorstep.

We dithered. We knew it could cost Nigel his life. But then, between ourselves, we decided to get married in secret without telling the family.

We would wear masks and risk asking two people — hopefully without the virus — off the street to be our witnesses.

Madness? Yes. But then Boris struck his blow to romance — and somehow it made us feel better. The decision was out of our hands.

For a month, we have only been out of the house to go to Nigel’s chemo sessions.

These have now been restricted so that no one — not even I — can accompany the patient.

This week Nigel will have to get in a taxi and, wearing an industrial mask bought by Laura, go to the clinic alone, whatever the odds of catching coronavirus.

And if Brexit divided people, the virus has done the same. I can no longer bring myself to speak to my oldest friend, who with her husband went to Italy for a Spring break in early March when we were already isolating and coronavirus was swirling there.

I warned her not to go, saying it was dangerous for her husband, in his late 60s, who had had prostate surgery and two strokes.

I was astonished to receive a chirpy note from her in Naples a few days later. She said she had bought two masks, the last ones in her small-town chemist, before she went.

I fired off a missive, which I do not regret, saying that if they returned infected they would burden the NHS which had saved his life in the past.

I hoped when they did so they would isolate themselves and not spread anything they had picked up in Naples. I never heard back from her.

Meanwhile, there have been well-wishers from unexpected places. An Iranian migrant called Masoud, whose extraordinary journey to Britain in a kayak across the Channel last August I revealed in the Mail, has sent his best wishes to Nigel almost every day from his Home Office accommodation in Birmingham.

Last Sunday, this converted Christian and his congregation all prayed for the English stranger they had never met.

On the other side of the world, 28-year-old Alain and his family, whom I met during the Haiti earthquake in 2010, have sent us regular WhatsApp messages of prayer in French.

He told me from his family’s hut, the size of a British shed up a remote mountain, that, in his already benighted country, with no public healthcare, there have been three corona cases.

Soon, the deaths will come fast: ‘We are scared,’ he said yesterday.

My Polish helpers, Lucy and Tomas, brought chocolate — along with scrubbing brushes, masks and antiseptic wipes to deep-clean the house while we kept our social distance on the roof terrace in last week’s sunshine.

As for ourselves, Nigel and I met as young journalists in our 20s. He was the youngest production editor in Fleet Street. Through life’s ups and downs, we remained just pals until — a decade ago — we both found ourselves free and fell in love.

Inevitably, even our good relationship is being tested by self-isolation. I see the divorce rates are predicted to go up, calls to matrimonial lawyers are up 155 per cent and I am unsurprised.

Listening to the latest news on the virus can be soul-destroying.

Only yesterday, Nigel asked me to turn off Radio 4 because it was so dismal.

And when I flooded the cloakroom — I’d turned away while washing my anti-corona latex protective gloves which then blocked the plug hole — the water covered the floor and soaked our last two packets of loo rolls. They had to be thrown away.

I shouted and even shed a tear of frustration over a tiny incident that would have been forgotten, even joked about, in the past.

Luckily, Nigel’s dry wit has survived the chemo and the hovering threat that any mistake by me could invite in the virus knocking him, at 6ft 4in, for six. At our house on the fringes of Chelsea, not a car has moved since Boris’s ‘stay-at-home’ edict a week ago.

The drone of the Heathrow planes has disappeared. Only the Army helicopters, bringing the top brass up from the country for Cobra meetings at Downing Street, penetrate the silence.

Up on our roof patio we can hear the birds sing for the first time.

Some of our laughs have come from emails and unwanted sales’ calls. In boredom, I filled in a quiz online to try to win £1,000 of supermarket vouchers.

I have never done such a thing before and, stupidly, put in my phone details. Almost immediately I finished the quiz (no, I didn’t win), ‘unknown-number’ calls flooded in asking us to sign up for health insurance (a bit late now), funeral plans (we hope they will be unnecessary) and even a house valuation.

In desperation, I ordered a packet of paracetamol capsules online: £8 including postage, and we marvelled at this blatant racketeering, given our predicament. But arrive they did last Thursday morning.

We received an email from Nigel’s tennis club in West London, a regular haunt for Nigel before his illness. He has played there with Boris Johnson, before now.

Both are off games this week.

It warned, censoriously, that members have been flouting ‘social distancing’ advice when playing. It was members’ duty to ‘do their bit’ said the committee.

A list of anti-corona rules had emerged from the Lawn Tennis Association. ‘It is clear coronavirus can be transmitted by touching a contaminated tennis ball so use new ones at the beginning of every match,’ they started off.

Confusingly, the instructions added: ‘Each player could have their own tennis balls clearly marked with their own initials and ensure they are the only person to touch these with their hands.

‘For other tennis balls, other methods could be used such as lifting with a foot and racket. Consider, too, not changing ends.’

Wimbledon, if it goes ahead, could be very different this year. 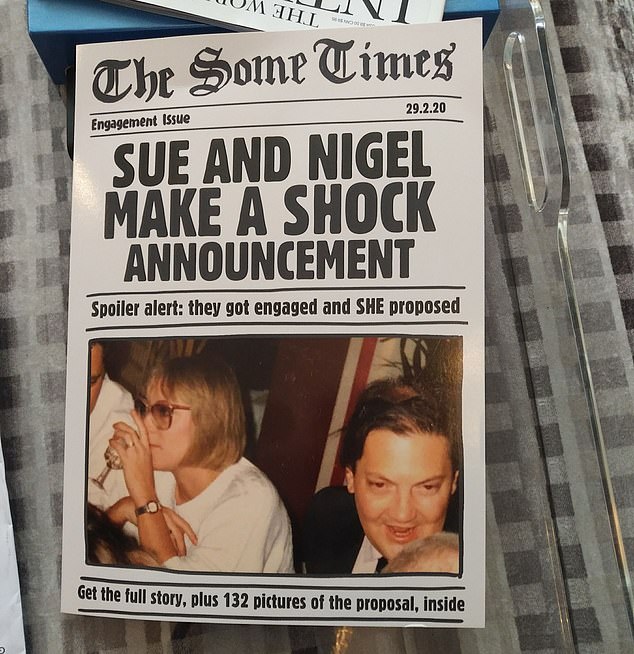 Sue Reid’s engagement card is pictured above, with a picture of the pair at a dinner party in the 1980s

A few days ago, though, the laughter stopped. I woke up next to Nigel with aches, pains, the occasional cough. Could it be the virus?

With our secret wedding in mind, I had let our guard down for the sake of vanity.

Leaving Nigel at home just before the Boris lockdown, I slipped out to the hairdressers across London in Little Venice.

With the ever-present mask, and a green, velvet scarf given to me as a Christmas present wrapped round my head as double protection, I hailed the first black cab I saw.

Of course, I shouldn’t have done it. But who gets married without their highlights shimmering?

The driver, Tony from Sutton, Surrey, said business was non-existent.

In five hours that morning he had taken only £15 in fares.

He said every few hours he wipes the door handles down with sanitiser.

At the salon, my regular stylist Natasha was waiting. She tended my hair, her face (apart from her eyes) covered, and waving a bottle of anti-viral liquid.

She told me that she had just flown back from a break to have her teeth fixed in Budapest where, she assured me, coronavirus was non-existent.

Now I find that even Hungary, with its barbed-wire borders to keep out unwanted migrants, has corona cases.

Our deputy ambassador in Budapest has, tragically, died of the virus at only 37.

Today the salon, like all others, has been closed.

My newly coloured locks can be viewed now only by Nigel.

On Friday, with my cough seemingly gone, we marked the moment we were to have become man and wife, in sickness and in health, by breaking open a bottle of real bubbly.

And in these trouble-filled times, which are worse for many than for us, we shared a kiss on the roof patio.