Student who thought she had freshers' flu actually had terminal cancer 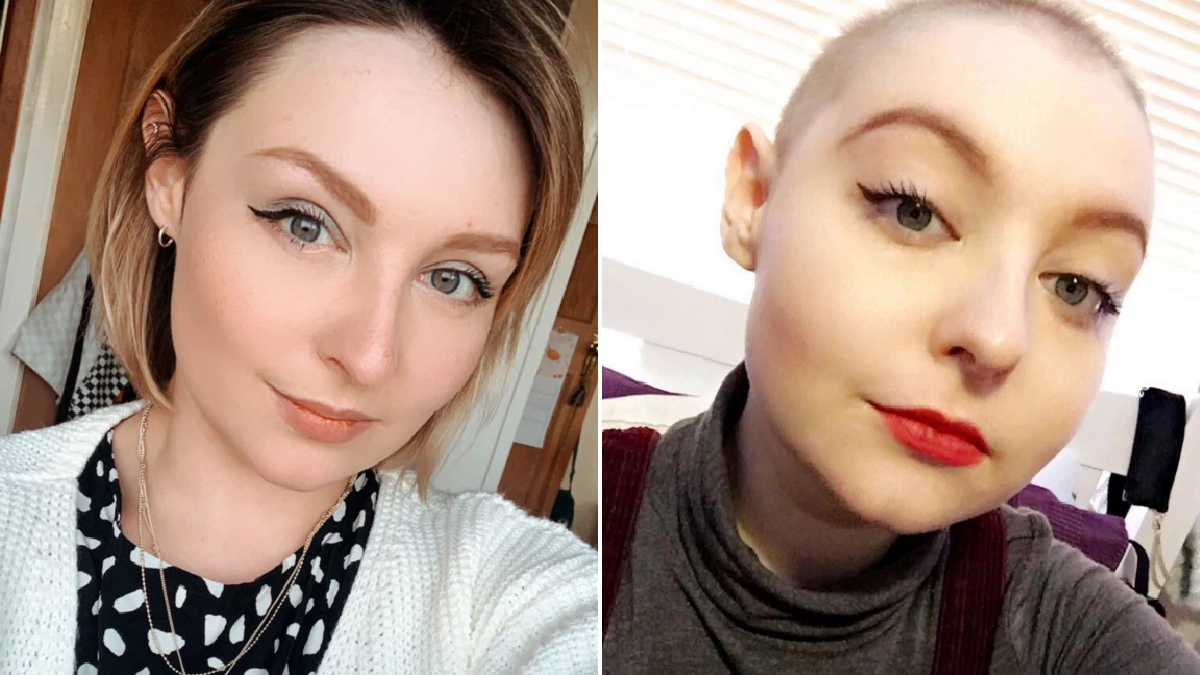 When Katherine Mills started to feel run down, she thought she just had freshers’ flu or was just tired from a commute back and forth to university.

But when she collapsed on a train platform she decided to see a doctor and was told she was probably just a chest infection.

Despite being prescribed antibiotics, she didn’t feel any better and a short time later, she felt a lump on the back of her leg.

But it took 18 months before she was told the reason for her health problems – she had cancer at just 22.

Sadly, she was diagnosed with an incurable sarcoma – a cancer that begins in the bones and soft tissue – and told she had just months to live.

But four years on, Katherine’s cancer is stable and she is now working to combat loneliness for others going through cancer.

The digital marketing student, from Sutton, south London, said: ‘I’ve had this very backwards experience of cancer, because the more stereotypical journey is that someone has a cancer diagnosis and their consultants aren’t too worried.

‘They put them on a ‘watch and wait’ and then the cancer gets worse. They try chemo but the chemo doesn’t work. They get told it’s terminal and then they die.

‘For me, I was told I was going to die straight away and now things have settled and my cancer is pretty stable.

‘At first, it was a horrific shock and it can be very lonely to be told you have four months to live at 22.

‘Working on the app has helped me a lot in discovering what I want my personal mission to be in all of this.’

Katherine first realised something was wrong back in January 2016, when she noticed her energy levels had begun to drop.

She said: ‘I had really, really bad fatigue. I was just really tired all the time. At first, I put it down to the fact that I was so tired from commuting to university. I thought it was freshers’ flu or something like that.’

But later that month, she fainted on a train platform and decided to see a doctor.

She said: ‘I was standing on the platform at Clapham Junction in south west London as the train was coming in. In a matter of seconds, I went from feeling fine, standing up and thinking about university then, all of a sudden, I just collapsed.’

‘Doctors did some blood tests. They put me on iron tablets, but around the same time I began to cough up blood.’

She was diagnosed with a chest infection and given antibiotics.

She said: ‘They gave me antibiotics, but they did nothing. I ended up getting sent to A&E for a blood transfusion and that’s when I noticed the lump on the back of my leg.

‘I flagged it to a doctor, but they brushed it off.’

In August 2017, 18 months after she started experiencing unusual symptoms, doctors at central London’s Guy’s and St Thomas’ Hospital told Katherine she had sarcoma.

‘It was a shock, of course, but my first thought was, “OK, how are you going to fix this?”‘ she said.

‘I assumed I would need an operation, or I’d start chemotherapy. At that point, in my mind, I thought that if you get cancer then you have treatment and then you go into remission.

‘But it wasn’t like that for me. When I asked for my prognosis, I couldn’t help but notice my nurse’s face fall.’

She was told she had just four months to live and would be lucky if she made it to Christmas.

‘I couldn’t believe what I was hearing,’ Katherine said.

Katherine was put on chemotherapy and tried to make the most of the ensuing few months with her parents retired IT contractor Peter, 64, and retired bank cashier Patricia, 62.

‘Christmas came and went,’ she said. ‘I was still here but I had no life. The treatment was draining.’

Cycles of treatment continued until in January 2020, she was diagnosed with a fungal chest infection and was told she had to pause chemo while it was treated.

Katherine said: ‘I ended up being off chemo for nine months. I had regular scans and, in that time, my tumour hadn’t grown at all.

‘That’s when I made the decision to come off treatment all together and enjoy the fact that my cancer was stable.

‘My life was quite restricted on chemo, in terms of what I could do and eat, and I was just so tired that I was sleeping all the time.

‘Now, to be off treatment, it does actually feel like I’ve got my life back. I’ve been able to start over in a way.’

She has returned to university to complete a masters degree in digital marketing and has taken up a new job as communications lead for an app called Alike in January 2021.

She first met founder Brad Gudger in October, 2018, through charity work she was doing for CLIC Sargent.

Alike connects cancer patients having a similar experiences, so they can share their thoughts and feelings and feel less alone.

According to research by Alike, 12,500 young people in the UK are diagnosed with cancer every year – 83% of whom experience loneliness during and after treatment.

Katherine said: ‘I feel a really strong responsibility towards people who are given a terminal diagnosis.

‘I’ve been there, I’ve planned my funeral at a young age.

‘As someone with an incurable cancer, I know our stories don’t often get told, but I’m now in a unique position to tell people what’s happened to me and to try and bring people with similar experiences together, to give each other support.

‘It’s a really personal mission for me to tell the story of living with incurable cancer, because not everyone is going to go into remission, not everyone will be cured.

‘Living with a terminal illness can be very isolating and it is so important to me to get our voices heard.’

Katherine feels that often, people with a terminal diagnosis are overlooked when it comes to support from peers and the wider community.

She said: ‘There are understandable reasons why people who are terminal are often very focussed on spending time with loved ones.

‘But I’m in a unique position where I’m terminal, but I’m not under a ticking clock, so I still want to do things with my life.

‘I have scans every three months – I’m what they call a ‘watch and wait’ because, at the minute, the cancer is not really doing anything. They’re keeping a watchful eye and waiting to see what happens.

‘I’m very grateful for that. I’ve defied a lot of the odds that were stacked against me and I’m really happy to be involved with things like Alike, so I can use my skills to help other people going through cancer like me.’