A strip club owner has said the bars have been ‘discriminated against’ with the 10pm Covid-19 curfew as she argued that dancers could ‘socially distance’ from customers.

Jennifer Nicie, who owns a chain of strip clubs in Southampton, London, Cardiff, Newcastle and Bournemouth, has said her businesses have been left ‘unviable’ by the government’s current restrictions.

The businesswoman argued the bars have been ‘discriminated against’  during the pandemic, telling the BBC: ‘We contribute a lot into the night time economy, then at a time of need, there has been nothing for us.’

Meanwhile one of the strippers, who remained anonymous during the interview and works at a branch of Jennifer’s For Your Eyes Only club, said: ‘I’m a single mum, I’ve had to apply of universal credit for me and my son. It’s really difficult, what they give you for one month is what you could earn in one night.’ 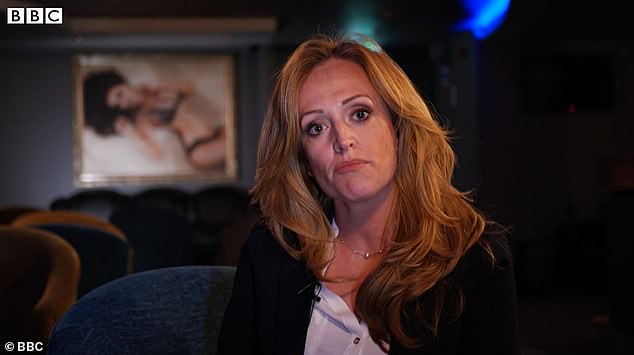 Jennifer Nicie, who owns a chain of strip clubs in Southampton, London, Cardiff, Newcastle and Bournemouth, has said the bars have been ‘discriminated against’ with the 10pm Covid-19 curfew

She continued: ‘Nobody really sees it as a real job I don’t think, but to us it really is.

The stripper, who said she is a single mother to a young son, explained that she had applied for universal credit but added: ‘It doesn’t cover all of the bills. 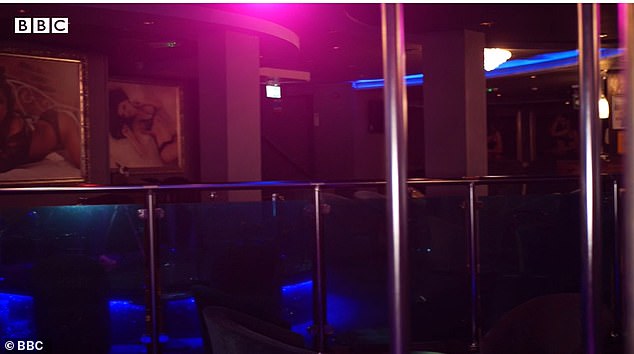 The business owner insisted that her dancers could socially distance from customers, and said her stage was four metres from seats

‘It’s not just making life difficult for the dancers, they’re going to end up in poverty.’

She added: ‘It’s really difficult, it’s scary. It’s not just “adjusting to a lifestyle”. we’ve got bills to pay.

‘It’s essential that we be there and in our jobs.’

Meanwhile For Your Eyes Only owner Jennifer explained her clubs have remained closed during the crisis, saying: ‘At the moment we have decided to mothball our clubs because the new curfew doesn’t work for us.

‘Our business model doesn’t work the same as nightclubs, it’s not stand up, vertical  drink. We are the late night drink.

‘Our venues start to fill up around 12am, and then our peak time is between 12 and 3am.’

She went on to explain that she believed her business could re-open in a covid-safe way, saying: ‘All of our customers are seated anyway, we can socially distance.

‘My stage is about four metres away from everybody else, that’s 2 metres over the government guidelines.

Jennifer argued that the businesses could re-open in a Covid-safe way, and accused the government of ‘discriminating’ against the industry

She added: ‘I can comply with all the guidelines that have been set. so why can I not open?’

Meanwhile she had been left feeling disheartened, saying: ‘I thought it was all of us in this together to help protect the NHS, so we closed down, we joined in with everybody else, and then I set back and watched lots of other businesses being able to open.’

Last month, Boris Johnson announced that pubs and restaurants across England must close at 10pm.

The government have been repeatedly challenged over the blanket 10pm curfew, amid claims it is doing ‘more harm than good’.