Stephen King has written some of the most beloved horror novels in the history of popular fiction, and many have been turned into equally acclaimed and successful films. Movies like Carrie, Stand by Me and The Shawshank Redemption have more than earned esteemed spots within the cinematic canon. Others – Maximum Overdrive, Thinner, The Dark Tower – have not.

But what about the small screen? As with the film adaptations, attempts to bring King's books to life on TV have had mixed results, and few have reached the heights of The Green Mile or Misery. But thanks to the longer running time afforded by a series, several of King's more unwieldy novels have proved better suited to television than to the multiplex. 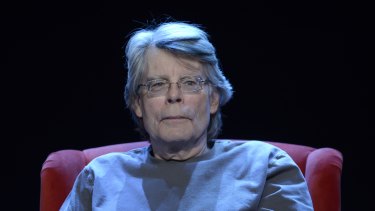 "That is the great thing about TV," King said, calling from his home in Bangor, Maine. "You can take these things as they are and expand more."

With a new adaptation of one of the author's longest, most complex novels, The Stand, arriving on Amazon, King looked back at the best and worst adaptations of his stories for television. 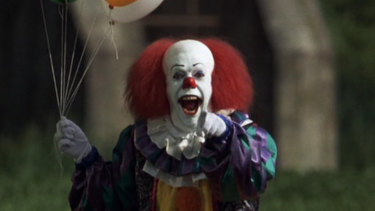 Pennywise the clown in the 1990 miniseries It, based on the novel by Stephen King.

This two-part ABC miniseries, an adaptation of King's sprawling 1986 novel about a child-murdering monster in small-town Maine, is perhaps best remembered for Tim Curry's frightening performance as Pennywise the clown.

"I liked that series a lot, and I thought Tim Curry made a great Pennywise," King said. "It scared the (expletive) out of a lot of kids at that time."

In fact, King credits the impact of the series on children with the later success of the film version, which starred Bill Skarsgard as the diabolical clown and was a box-office sensation in 2017. (A 2019 sequel, based on the second half of the novel, was similarly successful.)

"One of the reasons the movie was a big hit was because kids remembered seeing it on TV," King said. "So they went to see it."

"I didn't like it; I didn't care for it at all," King said of the TV adaptation of his 1987 science-fiction novel about the paranormal effects of a buried UFO on the residents of a small town. (He has described the novel as "an awful book".)

Jimmy Smits is "a fine actor," King said, but as alcoholic poet Jim "Gard" Gardener, "he had to give a bunch of pretentious, portentous lines". And at just over three hours, King felt the miniseries "should have been much longer."

"It felt kind of cheap and thrown together," he said. "I felt like they missed the sense of the book." 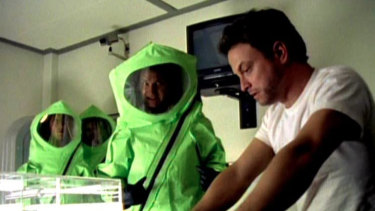 After both It and The Tommyknockers scored high ratings for ABC, the network agreed to greenlight an ambitious adaptation of The Stand, King's 1978 epic about the survivors of an infectious disease that has killed more than 99 per cent of the human race. Adapted by King himself and directed by his friend and frequent collaborator Mick Garris, the result is faithful and cohesive; the author likened it to other shows born of singular creative visions, like Godless and The Queen's Gambit.

"Mick directed everything, and I wrote everything, so there was never any sense of unevenness in the way they worked. It had one single style all the way through it," King said. "Mick loved the book and was dedicated to the idea that we would just do the book, which is what we did. ABC spent a lot of money on it."

A lesser-known King adaptation, The Langoliers is another two-part ABC miniseries based on a novella in the anthology book Four Past Midnight, from 1990. David Morse, Dean Stockwell and Bronson Pinchot star as passengers on a commercial flight that slips backwards through time and winds up stranded at an airport in Bangor.

"They came up to Bangor to actually film that," King recalled. "I liked it because it brought money into the town, and I liked the screenplay. I can't remember if I wrote that or not. Did I?"

It was in fact written by Tom Holland, who also directed. "Well, I did act in it," King said. He appears, briefly, as a sneering business executive in a dream sequence on an airport tarmac.

King has never been shy about his preference for the TV version of The Shining over Stanley Kubrick's acclaimed 1980 movie adaptation of the 1977 novel, which follows an alcoholic teacher and playwright as he's driven to madness and violence by a remote haunted hotel in the Colorado Rockies. (The 1980 movie is on Netflix, Binge and Foxtel on Demand.)

"Let's put it this way," King said. "I dislike the film. I always have. I admire the film, and I admire Kubrick as a director, which sometimes gets lost in the mix when people who absolutely love that film take me to task. I love Kubrick as a filmmaker, but I just felt that he didn't have the chops for this particular thing." 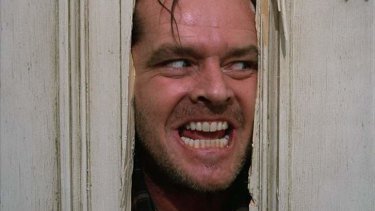 Stephen King has never been a fan of the 1980 movie adaptation of his novel The Shining, which featured a now-legendary performance by Jack Nicholson.

"I don't like the arc that Jack Nicholson runs as Jack Torrance," he continued. "Because it isn't really an arc – it's a flat line. He's crazy from the jump."

King also praised Rebecca De Mornay's performance as Wendy Torrance, which she "plays the way she's written in the book," as "the real reason I love that miniseries".

"I ought to go back and watch it again," he said.

Storm of the Century is not an adaptation but an original miniseries King wrote for NBC. It's also, he said, his crowning television achievement.

"That is my absolute favourite of all of them," he said.

Colm Feore stars as Andre Linoge, a nefarious demon who terrorises a small Maine island town in the throes of a brutal blizzard.

"I loved Colm Feore as Linoge, and I loved the story," King said. "They filmed it in Southwest Harbour in Maine in the wintertime and they got the snow, so you get the sense of this awesome blizzard and the people trapped in it. They did a terrific job." 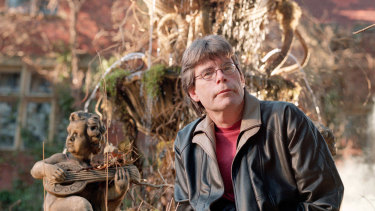 Stephen King on the set of Rose Red.Credit:AP

King wrote Rose Red, another direct-for-TV project, while recovering from his near-fatal road accident at the turn of the millennium.

"I was in a lot of pain, but I thought I'd love to do an homage to Shirley Jackson," he remembers. The result was a special effects-heavy ghost story miniseries on ABC in the spirit of Jackson's The Haunting of Hill House. The production encountered problems, including the death of actor David Dukes, and in the end, "I wasn't delighted with the way it turned out," King said.

"It didn't have the bang that Storm of the Century did," he said. "Some of the acting was a bit … well, maybe it was the writing." 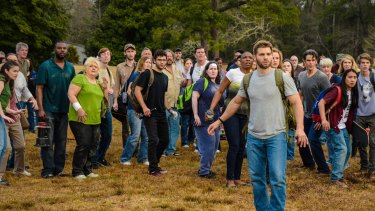 King's novel from 2009 has an irresistible premise: A small town is inexplicably trapped inside a giant impenetrable dome. The CBS series adaptation, which starred Dean Norris of Breaking Bad as town Councilman James "Big Jim" Rennie, had a promising start.

"The first few episodes were great," King said. "But the thing was, what CBS wanted was basically meatloaf – nothing too challenging, something to just fill some hours."

As the series progressed, "it went off the rails," he said, and ultimately "descended into complete mediocrity". Not that he was particularly troubled by it.

"It was a sad thing, but it didn't bother me," King said. "I stopped watching after a while because I just didn't give a (expletive)." 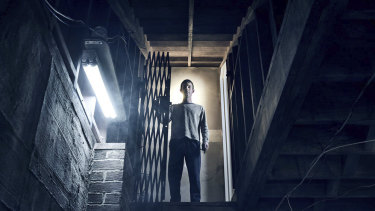 Mr. Mercedes is a thrilling, genuinely scary adaptation of King's series of recent crime novels about a retired Midwest detective taunted by a serial killer he was unable to catch during his career. Developed by AT&T's somewhat obscure Audience Network, the series is not as widely known as some of the author's other TV adaptations. King thinks that's too bad.

"It was like we brought a stadium show to a coffee shop," he said. "I liked it a lot, but nobody saw it."

The show's three seasons have recently been picked up by NBC (it has not yet been renewed for a fourth) and are streaming on its Peacock platform. "And thank God for that," King said. "People are actually seeing it now." 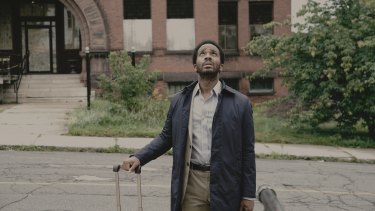 Hulu's Castle Rock differs from other King TV shows in that it is not a straightforward adaptation of any one of his stories but a kind of amalgamation of his characters, themes and settings.

"J.J. Abrams approached me and said he wanted to use the fictional town of Castle Rock as a staging area to take some of my characters and – it might sound grand to call it this – the mythos," King said. "The people involved were big fans of those books, and I liked what they did quite a lot."

Hulu cancelled the series after two seasons – right when it was finding its rhythm, King argued.

"In the second season, they really got their feet under them," he said. "I would have liked to have seen it go on and grow a little bit." 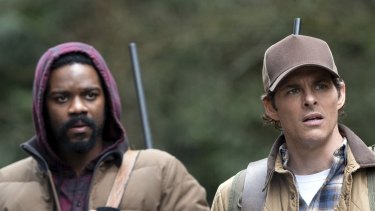 Jovan Adepo as Larry Underwood and James Marsden as Stu Redman in The Stand.Credit:Robert Falconer/CBS

The new adaptation of The Stand is much anticipated, and even King hasn't seen the finished product.

"I've seen some rough cuts, and I can't really give you an opinion yet except to say that it was interesting to see it brought to the 21st century and to see some of the changes that were made," he said.

One clear improvement so far has to do with casting and diversity. "The novel was very white; the miniseries was very white," he said. "They have done a multicultural thing here, and that makes perfect sense."

He also contributed a new ending – which he won't reveal. "I always knew there was one more thing I had to say in that book, one more scene I wanted to write, and I finally did," he said. "And I'm happy with it."

Related posts:
Border wars tipped to rage on for at least six months
Ryan Dorsey Shares Sweet Tribute on What Would Have Been Naya RIvera's 34th Birthday
Popular News
Timber merchant's coffin carried to his funeral on forklift truck driven by son
17/01/2021
Man Utd wonderkid Ramon Calliste, called ‘the next Giggs’, now owns luxury watch business and makes £5m a year – The Sun
26/03/2020
Megan Thee Stallion Addresses Criticism Over Twerking: ‘I Love to Shake My A**’
26/03/2020
Police guard shops to stop coronavirus panic-buyers and enforce social distancing – The Sun
26/03/2020
Coronavirus: Good Morning Britain’s Dr Hilary reveals ‘game-changing’ self-testing kit
26/03/2020
Recent Posts
This website uses cookies to improve your user experience and to provide you with advertisements that are relevant to your interests. By continuing to browse the site you are agreeing to our use of cookies.Ok