Spencer P. Jones: the guitar man who made generosity cool

Like many who saw Spencer P. Jones perform over four decades in music, music writer Patrick Emery thought he knew a bit about the man affectionately known as SPJ. 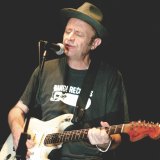 Emery didn’t know about Jones’ early days as a schoolboy rugby player in New Zealand, his exceeding generosity or the staggering number of musicians Jones played with – even before forging a solo career and welcoming an endless parade of old comrades and younger musicians into his various bands.

It was during the seven years he spent interviewing Jones, who died in 2018, and writing his biography Execution Days: The Life and Times of Spencer P. Jones, that Emery unearthed so much about the man he says left an indelible mark on Australian music.

“When I first approached Spencer about writing the book, I remember him saying ‘surely there’s someone more important than me you could write about’,” Emery recalls.

“He was very proud of his achievements, but Spencer was also very humble, modest and while he was happy to tell his story, his story was also about the people he’d met and played with, critical people in his life; Ian Rilen, Rowland S. Howard, Steve Connolly and so forth.

“I realised along the way that Spencer had these important relationships with various people over his 40-year musical history, but he’s not the dominant figure … and his story is the story of a whole bunch of other people too.”

‘On a broad level, I didn’t realise just how much Spencer had done …’

Jones was born in the New Zealand town of Te Awamutu, as chapter one of Emery’s book reveals, in 1956. It was the same year Dick Clark began hosting popular music program American Bandstand, and when Wanda Jackson released the track I Gotta Know. A young star called Elvis Presley had three No.1 singles that same year and appeared on the Ed Sullivan Show, while 16-year-old John Lennon formed the Quarrymen.

A keen student of history himself, Emery frames Execution Days chronologically, the events in Jones’ life overlapping with other significant moments in the story of Australian music. There’s the period between 1995 and 2002 when Jones was part of Paul Kelly’s band, while simultaneously forming his own band, the Last Gap, and pulling together a group to play a bunch of shows while visiting New York.

It was during the same period, in 1998, when Mike Brady was performing his football anthem Up There Cazaly at a corporate event that he unexpectedly crossed paths with Jones. 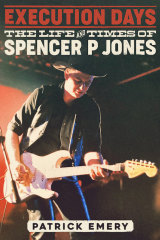 Execution Days: The Life and Times of Spencer P. Jones.Credit:

Brady’s story of how he and Jones came together is typical of the extraordinary events that peppered Jones’ remarkable life, one of more than 150 interviews with SPJ’s many family, friends and musicians, as well as the man himself, in the book.

“Spencer told a great story, I could never tell a story like him, so I didn’t want to even pretend to replicate that,” Emery said.

“In terms of the way I tried to order the book … there were various moments along the way when people said things that just resonated, but I didn’t want to do a strict chronology, partly because that would have done my head in, but Spencer was a different person in Beasts of Bourbon compared to Spencer in The Johnnys or the Working Class Ringos … in all those different environments you get a slightly different Spencer P. Jones.”

A fellow member of Kelly’s band, bass player Steve Hadley, recounts how Jones stayed behind with him after Hadley was late rising one morning and missed the tour bus from New York to Philadelphia.

“It was my fault, no-one else’s,” Hadley says. “But I never forgot that Spencer hung around.” 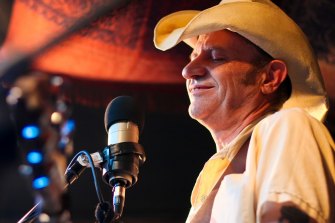 Later in his career – during one of several incarnations of Spencer P. Jones and the Escape Committee – guitarist Phil Gionfriddo recalls in the book how he left the band during a period of upheaval that was also a troubled time in Jones’ personal life.

“I really wanted to patch things up, so I gave Spencer a call. Spencer was really icy for the first few minutes, but we got through that and I went and saw him play. He gave me a hug, and got me up on stage to play a bit of guitar. That was really important to me because I deeply respect and love Spencer.”

It’s an important passage in the book, firstly because it’s one of few times Jones’ own demons spilled over and affected the way he treated others, but it also highlights how highly regarded he was by his peers, fellow band members and friends.

“There’s a quote in there from Pearly Black,” says Emery, “who sang on a couple of his songs, and she said Spencer was cool because if he liked something, he liked it, and he would help someone along. If he liked artistically what someone was doing – it could be anywhere on the musical spectrum – he supported it.

“Charles Jenkins said Spencer was the first person he realised was cool because they were generous … and I [Emery] thought that’s an impressive character trait.”

Emery’s painstaking research – from the war records of Jones’ father and grandfather to the more obscure bands and artists SPJ played alongside – reveal a life lived not so much in the public glare, but one lived, unapologetically, pursuing artistic and creative expression.

“I still remember the look on his face,” Emery says. “After finding his dad’s war record I asked Spencer if he’d like a copy. He came around to my place one day, looked at it, and said ‘that’s my dad’s signature’ and ‘you don’t know how much this means to me, this is so important’.

“At the end of the day, I realised the more I found out about him, the less I really knew … and that’s the beauty of Spencer as a biographical subject, an infinite mine of activity and experience.”

Execution Days: The Life and Times of Spencer P. Jones, $34.95, is published by Love Police. lovepolice.com.au