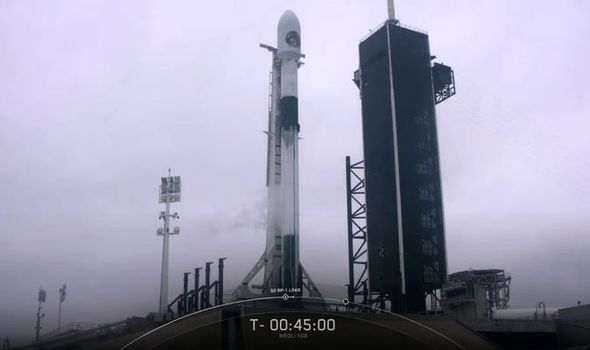 SpaceX has aborted the launch of the NROL-18 mission at the one minute and 53-second countdown. The Elon Musk firm was tagged to fly an unspecified spy satellite into orbit for the US National Reconnaissance Office (NRO). SpaceX’s ground control, however, noted higher-than-normal pressured in the launch vehicle’s upper stage.

An attempt was made to recycle the launch before the 5pm GMT (12pm EST) launch window was over.

The decision was then made to scrub the launch altogether and push it to a backup window on Friday, December 18.

A SpaceX commentator said during the company’s official live broadcast of the launch: “If you’ve been following along, we had an abort on the countdown at the T minus one minute and 53-second mark.

“At that time sensors detected slightly high pressure in the upper stage liquid oxygen thanks, which caused the abort.

“Now keep in mind the purpose of the countdown is to help us catch potential issues prior to flight.

“There are a thousand ways a launch can go wrong and only one way it can go right.”

Related posts:
How Kacey Musgraves Almost Gave Away A Hit Song To Another Artist
The Masked Singer Crowns Its Winner
Popular News
‘Mother Schmuckers’ Trailer: Sundance Midnight Comedy Has John Waters and ‘Jackass’ Vibes
25/01/2021
Man Utd wonderkid Ramon Calliste, called ‘the next Giggs’, now owns luxury watch business and makes £5m a year – The Sun
26/03/2020
Megan Thee Stallion Addresses Criticism Over Twerking: ‘I Love to Shake My A**’
26/03/2020
Police guard shops to stop coronavirus panic-buyers and enforce social distancing – The Sun
26/03/2020
Coronavirus: Good Morning Britain’s Dr Hilary reveals ‘game-changing’ self-testing kit
26/03/2020
Recent Posts
This website uses cookies to improve your user experience and to provide you with advertisements that are relevant to your interests. By continuing to browse the site you are agreeing to our use of cookies.Ok