Fish eye lens: Zebrafish use ‘single-pixel vision’ to spot their tiny prey – which may be the same technique humans use to see minuscule details like stars in the sky

The humble zebrafish can pick out tiny details in its environment just like a human spotting a faraway star, a study has found.

The fish, named after its stripes, sees these objects through a single photoreceptor cell, which scientists say provides clues as to how long-distance vision works in humans.

It also deploys UV light, used on sunbeds, to easily catch sight of zooplankton swimming through the water – which are difficult to see using the visible light spectrum.

The research could lead to the development of new treatments for people suffering from dysfunction of extreme ‘spatial acuity’ vision – inability to see fine details. 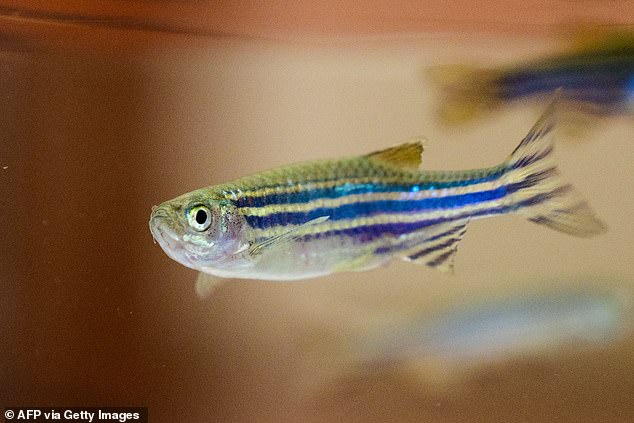 Zebrafish (pictured). The fish use UV light to pick out prey and can spot an object from far away by using a single photoreceptor cell in their eye 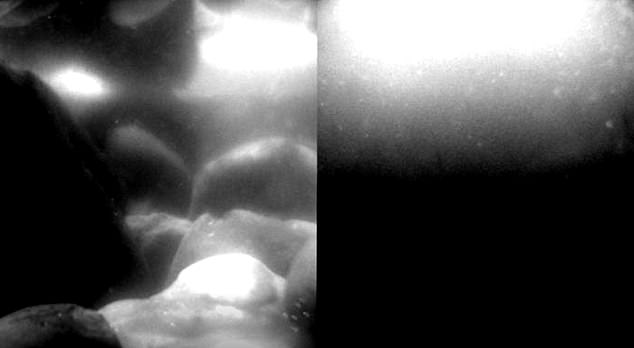 This picture shows the fish environment viewed using the visible light spectrum (left) and UV light (right). The tiny dots are the zooplankton prey, which are clearer on the left

The photoreceptors were identified inside the ‘acute zone’ of the zebrafish eye where its vision is best, thought to be an early forerunner to the human fovea.

These act like ‘special pixels’, which have been ‘specifically tuned to be sensitive to prey-like stimuli’, the scientists said.

Study co-author and neuroscientist at the University of Sussex, Professor Tom Baden, said: ‘We found that zebrafish are using their photoreceptors to spot their tiny prey – the equivalent of us spotting a star in the sky.

‘There have been suggestions that primates and, therefore, humans too, use similar tricks to enhance our own foveal vision.’

The study, published in journal Neuron, also found the fish use UV light to spot prey, which Professor Baden described as ‘super-vision’.

‘Zebrafish prey is really hard to see with human vision, which ranges from “red” to “blue”,’ he said.

‘However, beyond blue, zebrafish can also see UV, and as it turns out their prey is easily spotted when illuminated with the UV component in natural sunlight.

‘Our research found that without UV-vision, zebrafish have a much harder time spotting their prey.’

Previous research published in Cell looked at primate retinas which contained foveas, which collected more light than their non-foveal counterparts and were able to collect signals for longer in order to better filter out noise.