Prime Minister Scott Morrison has launched a bid to recover from weeks of political damage over the treatment of women by naming a new cabinet team, shifting problem ministers and punishing a disgraced Liberal MP.

Mr Morrison named Peter Dutton as the country’s next Defence Minister and leader of the government in the House of Representatives and Michaelia Cash as the new Attorney-General and Industrial Relations Minister in the two biggest appointments in the changes. 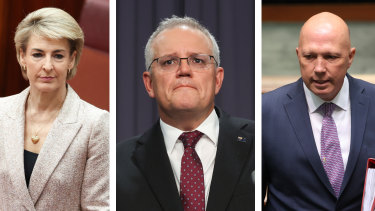 Scott Morrison has given Michaelia Cash and Peter Dutton new portfolios in a cabinet reshuffle.Credit:Alex Ellinghausen

Industry Minister Karen Andrews will be elevated to Minister for Home Affairs, replacing Mr Dutton and taking a high-profile position as one of the cabinet’s most senior women.

The Prime Minister has faced a wave of anger about the treatment of women in the six weeks since former Liberal adviser Brittany Higgins alleged she was raped in Parliament House in March 2019.

“These changes will shake up what needs shaking up,” he said.“What we must do is address the government’s agenda with the changes we are making.”

Mr Morrison said improvements for women would come from greater collaboration and working together, not from setting people against each other.

He also announced a new cabinet taskforce on women’s equality, safety, economic security, health and wellbeing. The taskforce will be co-chaired by Mr Morrison and the Minister for Women, Marise Payne, and will include all women from the ministry as well as Treasurer Josh Frydenberg and Finance Minister Simon Birmingham.

As expected, Mr Porter moves out of the Attorney-General’s portfolio due to concerns about any conflicts of interest in the portfolio while he takes defamation action against the ABC over its reporting of allegations of rape, which he denies.

Mr Porter will become Minister for Industry, Science and Technology, replacing Ms Andrews. A key factor in the move was concern in the government that dropping Mr Porter from cabinet and the ministry would send a message that an accusation was enough for ministers to lose their job.

Mr Morrison also removed Linda Reynolds from the defence portfolio while she takes leave over a heart condition. When she returns from leave next week, Senator Reynolds will become Minister for Government Services, remaining in cabinet.

Senator Reynolds was admitted to hospital on February 23 after a week of intense criticism of her actions following the alleged rape of Ms Higgins in her ministerial office two years earlier.

Mr Morrison has criticised Senator Reynolds over some of her response to the alleged rape in her office, saying it was “disgraceful” she called Ms Higgins a “lying cow” over the adviser’s claims she did not get enough support after the incident.

He also acknowledged that people in the government failed to give Ms Higgins enough support, even though they were trying to help.