Scientists spot a drop in the vibrations caused by human activity

Coronavirus lockdowns are changing the way the Earth moves: Seismic noise detectors in London, Paris and LA record a drop in vibrations as people stay at home and transport networks grind to a halt

Scientists monitoring the surface of the Earth for vibrations have seen a notable drop in activity since several cities went into lockdown to slow the spread of coronavirus.

Data collected by the British Geological Survey from seismometers across London shows ‘a drop in noise levels as human activity decreases’.

Experts say this change in background vibration levels is a direct result of stay-at-home and lockdown measures imposed by the UK government.

Seismometers detect seismic waves – vibrations – in the Earth’s crust but also pick up humans moving around, industry and traffic, which shows as high-frequency noise.

Similar trends have been observed in Paris, Brussels, Los Angeles and Aukland.

The lower than usual noise levels detected over the past few weeks are similar to those seen by seismometers over Christmas but are lasting longer.

The top image here is from a seismometer near the M4 motorway in the UK in February, the bottom image is from the same location but in March during the lockdown 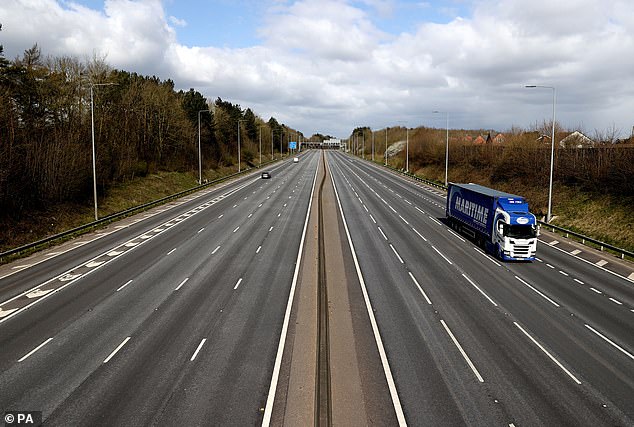 Royal Observatory of Belgium geologist, Thomas Lecocq created a tool to show noise changes which has been used by experts around the world.

Seismologist Stephen Hicks created one of these graphs and said ‘this week has seen a reduction in average daytime background seismic noise level’.

He used data from a British Geological Survey seismometer near the M4 motorway and said ‘it probably reflects less traffic out on the roads’.

Lecocq said the levels detected by the seismometer in Brussels since the start of stay-at-home orders looked the same as those detected on Christmas Day. 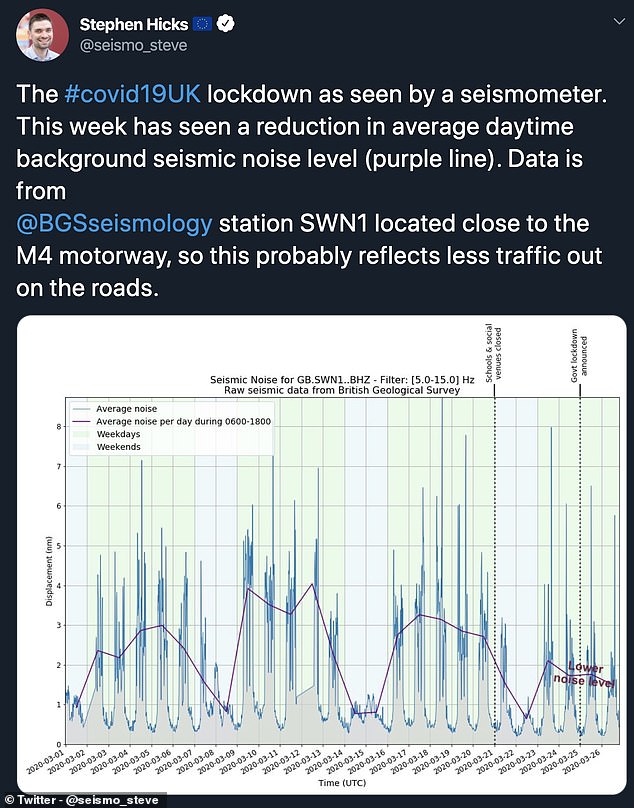 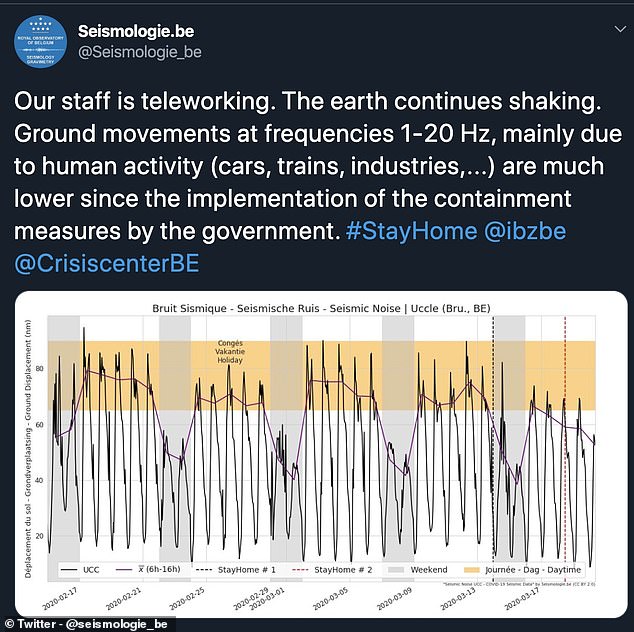 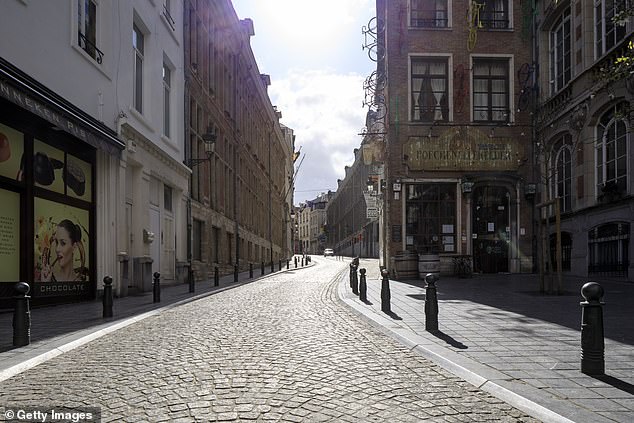 ‘When it snows, it’s quiet, and when there’s a marathon, we can see people running,’ the seismologist told Gizmodo.

Belgium isn’t known for earthquakes, so it is easier to detect subtle changes in seismic noise, according to Lecocq.

The expert said there was a clear benefit to scientists looking to detect earthquakes in being able to compare noise levels with and without human activity.

He said by being able to spot the noises made by humans we can remove them from our data in order to better spot weaker and more distant earthquakes.

It’s not just human noise either, the wind and ocean also generate noise and by removing humans from the equation they can also categorise other natural sounds.

Those sounds can then also be removed from the data making earthquake detection clearer and more reliable.

Seismologist Susan Hough from the US Geological Survey told Gizmodo the readings make sense and are closer to nighttime levels in any given city.

‘If almost everyone stayed home and didn’t move a muscle, the daytime noise levels would approach the usual nighttime levels,’ she said.

Researchers around the world have been using the same technique Lecocq created to generate their own graphs from various location seismic data. 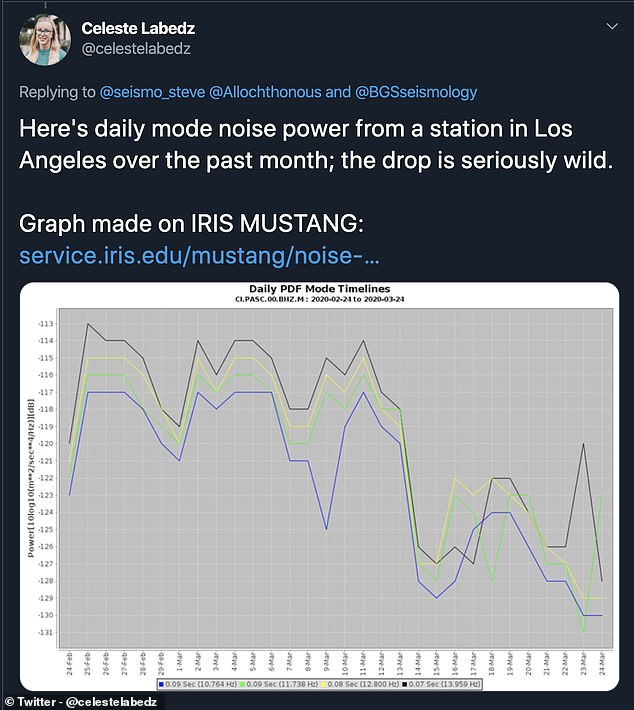 There was a dramatic change in the noise level detected in Los Angeles, as can be seen at the tail end of this graph created by geophysicist Celeste Labedz 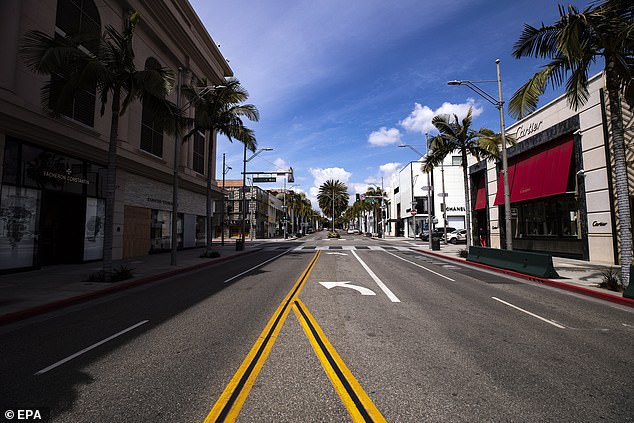 Rodeo Drive is empty and its luxury goods stores are closed amid the coronavirus pandemic in Beverly Hills, California

Geophysicist Celeste Labedz created a daily noise graph for Los Angeles and found the drop in noise was ‘seriously wild’.

In the New Zealand seismologists saw a ‘much reduced’ level of ‘man made seismic noise’ in Aukland from the Herne bay Seismometer.

Jerome Vergne, an expert from France said: ‘Ambient seismic noise in France has decreased slightly since the start of containment, thus improving our earthquake detection capacity.’

They have all seen a drop in seismic noise and could allow detectors to spot smaller earthquakes or even boost efforts to monitor volcanic activity. 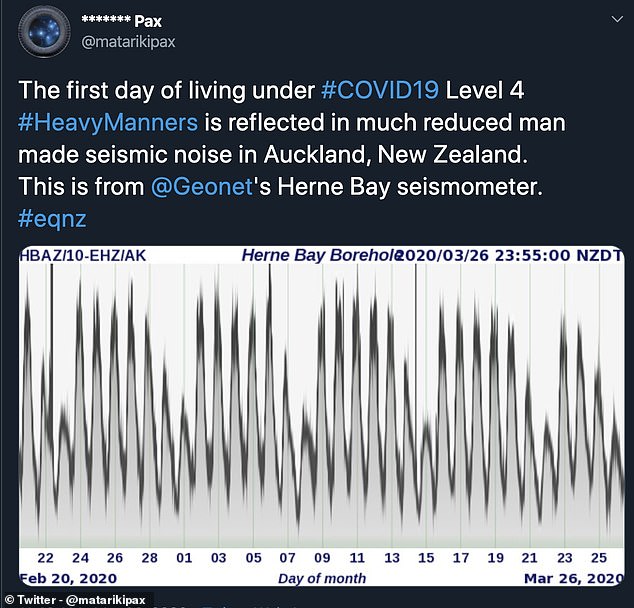 In New Zealand there was ‘much reduced man made seismic noise’ according to seismologists, who used data from the Herne Bay seismometer 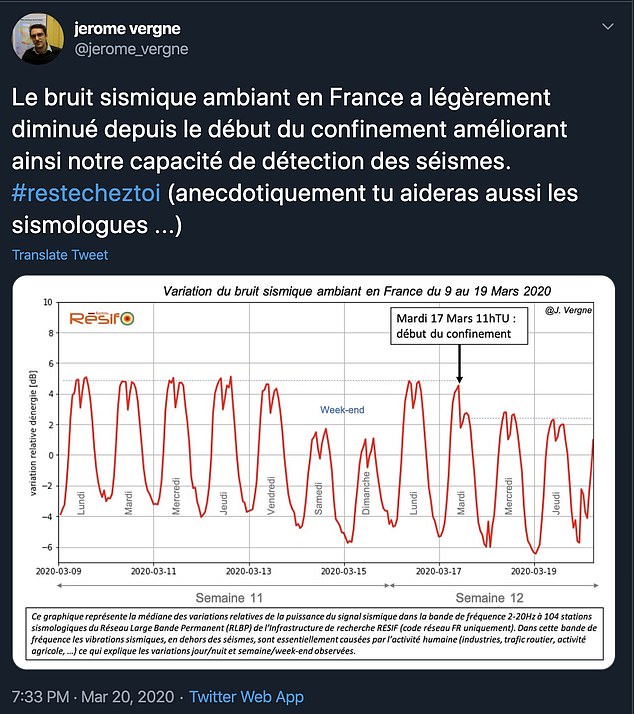 Jerome Vergne, an expert from France said: ‘Ambient seismic noise in France has decreased slightly since the start of containment, thus improving our earthquake detection capacity’ 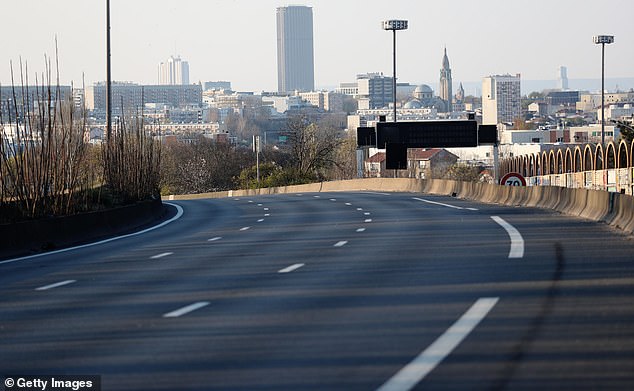 ‘Although the effects from individual sources might be small, together they produce background noise, which reduces seismologists’ ability to detect other signals occurring at the same frequency,’ reports Nature in an article on the findings.

In Brussels the measures to slow the spread of COVID-19 caused seismic noise from human activity to fall by about a third, says Lecocq.

The surface seismometer used to make the findings is now almost as sensitive to small quakes and quarry blasts as a counterpart detector buried in a 330ft borehole.

‘This is really getting quiet now in Belgium,’ he said.

The British Geological Society tweeted: ‘Lots of our seismometers are seeing a drop in noise levels as human activity decreases.’

Catastrophic earthquakes are caused when two tectonic plates that are sliding in opposite directions stick and then slip suddenly.

Tectonic plates are composed of Earth’s crust and the uppermost portion of the mantle.

Below is the asthenosphere: the warm, viscous conveyor belt of rock on which tectonic plates ride.

They do not all not move in the same direction and often clash. This builds up a huge amount of pressure between the two plates.

Eventually, this pressure causes one plate to jolt either under or over the other.

This releases a huge amount of energy, creating tremors and destruction to any property or infrastructure nearby.

Severe earthquakes normally occur over fault lines where tectonic plates meet, but minor tremors – which still register on the Richter sale – can happen in the middle of these plates.

These are called intraplate earthquakes.

These remain widely misunderstood but are believed to occur along minor faults on the plate itself or when ancient faults or rifts far below the surface reactivate.

These areas are relatively weak compared to the surrounding plate, and can easily slip and cause an earthquake.

Earthquakes are detected by tracking the size, or magnitude, and intensity of the shock waves they produce, known as seismic waves.

The magnitude of an earthquake differs from its intensity.

The magnitude of an earthquake refers to the measurement of energy released where the earthquake originated.

Earthquakes originate below the surface of the earth in a region called the hypocenter.

During an earthquake, one part of a seismograph remains stationary and one part moves with the earth’s surface.

The earthquake is then measured by the difference in the positions of the still and moving parts of the seismograph.