Home » Lifestyle » Save your tax cut and ask for a pay rise. Tell your boss Josh sent you

Save your tax cut and ask for a pay rise. Tell your boss Josh sent you

The bottom line of the federal budget for most Australian households is this: it’s time to ask for a pay rise.

If your boss tells you you’re dreamin’, tell ’em Josh Frydenberg sent you. On the Treasurer’s estimates, average pay packets are poised to grow by 3.25 per cent in the coming financial year. 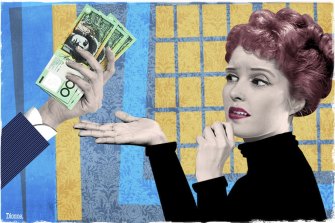 For that to come to pass, workers better get cracking demanding 3 or 4 per cent pay rises today.

Good luck with that.

The Reserve Bank is also tipping wage growth to accelerate to 3.25 per cent, which would be the fastest pace of growth since 2012, but not until mid-2024 – a full year later than Frydenberg’s reckoning.

Many public sector employees are staring down the barrel of just 2.5 per cent pay rises locked in for the coming financial year.

But the urgency for pay rises is becoming very real. Amid supply shortages and war, the budget figures tip the cost of living will rise by 3 per cent in the financial year ahead.

Get it? Even if you can get your boss to pony up with Frydenberg's’s expected pay raise, you’re only going to be 0.25 per cent ahead of the inflation game.

Now you can start to see why this had to be a “cost of living budget”.

Without Tuesday night’s relief on fuel excise, income tax cuts and the cash bonus for pensioners, households would be backsliding at an alarming rate.

Even after these measures, it’s not clear whether or not they are ahead.

Of course, households already know this. They’ve been living with it for two years.

Real pay packets have shrunk for two years in a row with any wage gains more than gobbled up by the rising cost of living.

What was different during the pandemic is that households had their miserly pay increases offset by historic government largesse to keep them afloat, from tax cuts to cash bonuses to early super access to job support payments.

Compared to those, the handouts delivered in this budget are just a drop in the bucket.

I do hope you pocketed some of those previous savings, because you’re going to need a buffer against pressures ahead.

And you better think about putting aside some of these budget savings too, because if inflation is staying at 3 per cent – the top of the Reserve Bank’s comfort zone – you better believe interest rates will be rising at some point soon.

These will likely eat up most of the fuel excise savings and cost of living tax offset and then some.

This budget is packaged as a “cost of living” budget but in reality there are limits to what the budget can do.

Frydenberg can’t actually give you a pay rise, of course. All he can do is cut taxes or increase government spending and he’s done a bit of both. Whether they’re enough to ease the cost of living pain that’s coming, remains to be seen.

Jacqueline Maley cuts through the noise of the federal election campaign with news, views and expert analysis. Sign up to our Australia Votes 2022 newsletter here.