Sarah Ferguson dons a head scarf and says she’s ‘privileged’ to meet a top female judge and a women’s cycling team who have fled Afghanistan, as she visits a refugee camp in Albania

The Duchess of York has met mothers and their children as well as a top female judge who have been forced to flee Taliban occupied Afghanistan in the last 10 months.

Sarah Ferguson, 62, was invited by an emergency relief charity to visit a refugee camp, in the Kolivari resort, in Golem, Albania to meet displaced families and individuals that have fled their country.

Writing on her Instagram page, Fergie explained: ‘Since the Taliban began sweeping through Afghanistan, they have mounted an incredible evacuation effort of hundreds and hundreds of refugees to Albania; and I had the privilege of meeting these extraordinary people, and listening to their stories.’ 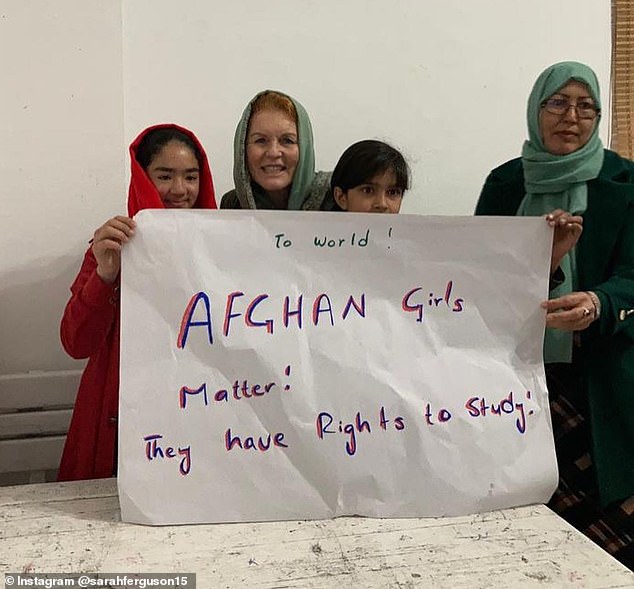 Sarah Ferguson, 62, was invited by an emergency relief charity to visit a camp in Albania to meet Afghan refugees 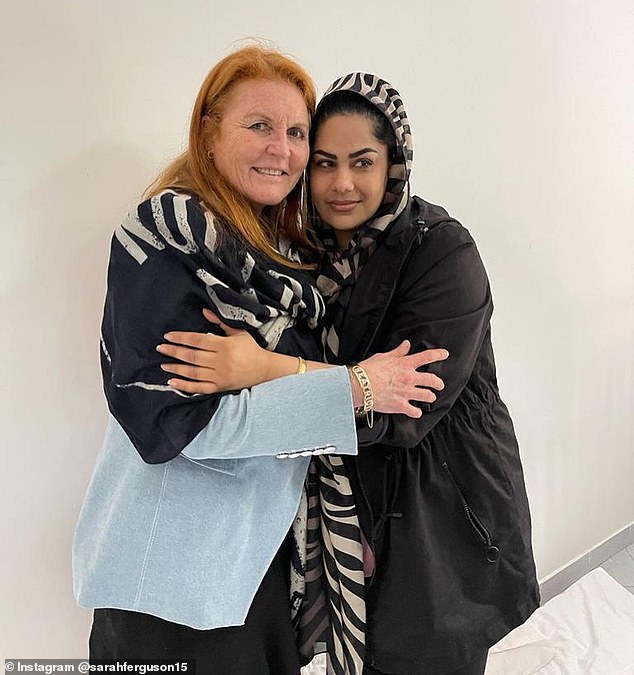 Sarah shared many stories of women’s bravery and the horrifying situations they’ve had to escape, including one woman fled while eight months pregnant, giving birth in Albania

So far, there are 2.6 million registered Afghan refugees in the world, with 2.2 million registered in Iran and Pakistan alone. Another 3.5 million people are internally displaced, having fled their homes searching for refuge within the country since the Taliban took control.

Prince Andrew’s ex wife, posted photos of herself embracing children and chatting to the mothers.

‘When I arrived in Tirana, I was met by a minibus of friendly and kind people, including Goula Fruz, a senior policewoman who fled for her life together with her two sisters and is now a refugee in Albania. 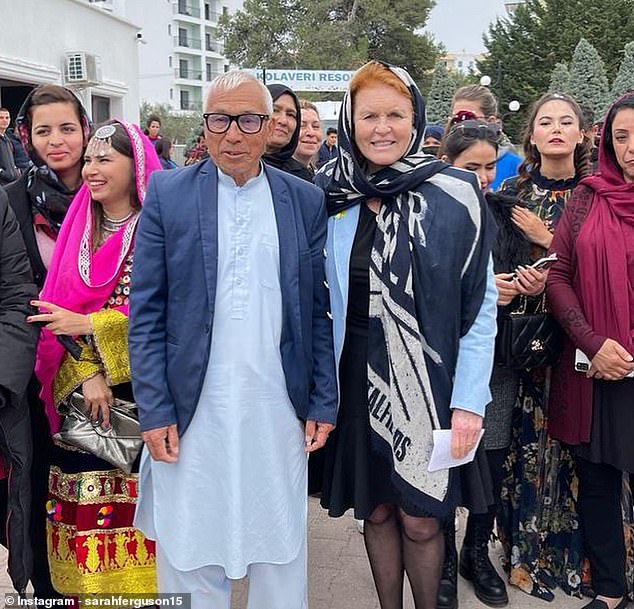 Sarah was invited to Albania by IsraAID, an Israeli non-governmental organization, partnering with local communities to support people affected by humanitarian crisis around the world 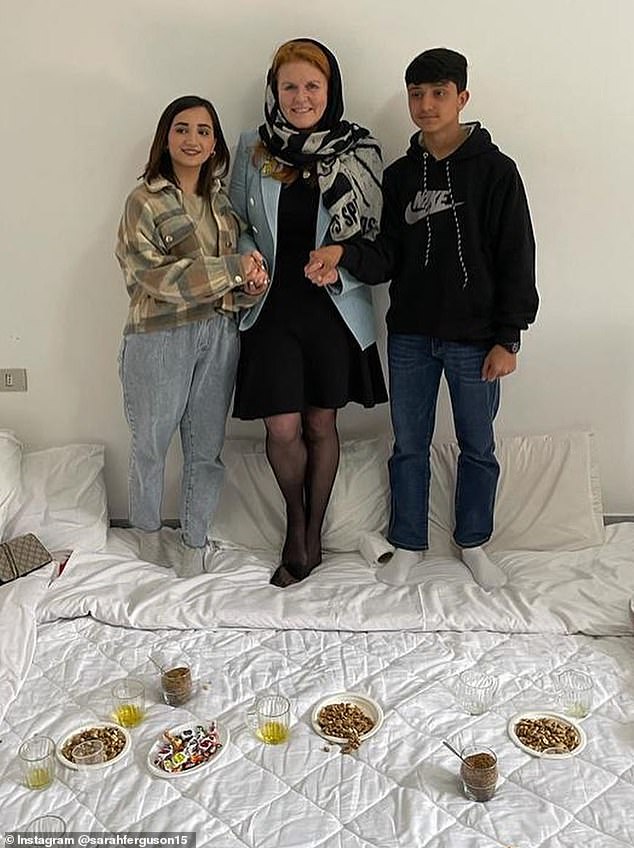 The duchess holding hands with a young boy and girl at the Kolivari resort, in Golem, Albania 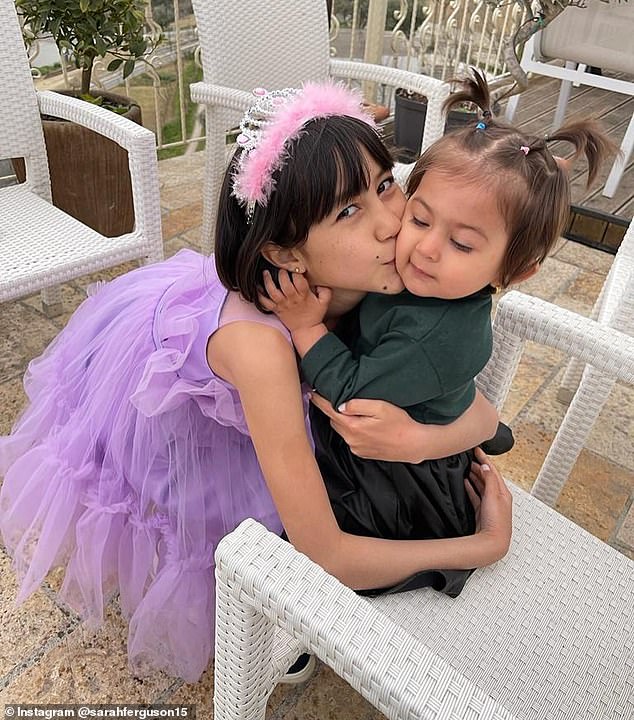 Meeting children in refugee camps would be very hard for the new grandmother, who now has Princess Eugenie’s son August, one, and Princess Beatrice’s daughter Sienna, born in September

‘Fatima a star of the all-girls national cycling team of Afghanistan, with Samim and Mujtaba…two university friends, as well as Beheshte and 14 year old Iqbal, the daughter of the Mayor of Kunduz, who, due to lack of spaces, were separated from their father and family who remain in Afghanistan.

‘They have no idea where their final destination will be.

The duchess added that when she arrived at the refugee camp, in the Kolivari resort, in Golem, she was welcomed by an Afghan poet, Mohammad Zaria, with a poem about peace, ‘written specially’.

The grandmother to Princess Eugenie’s son August, one, and Princess Beatrice’s daughter Sienna, born in seven months, also explained how she met a mother-of-five, Halima, who fled Afghanistan when she was eight months pregnant with her son, Amir.

‘Halima is the wife of a well-known private publisher in Kabul, who dared to print books critical of both the Taliban and corruption in the government,’ the Duchess explained.

‘Halima’s younger sister, who was working as a vaccinator, was among a group of women killed by the Taliban last month after being ambushed by militants. Her other sister, Aysha, is trying to join her in Albania but is stuck in Pakistan, with no route forward.’ 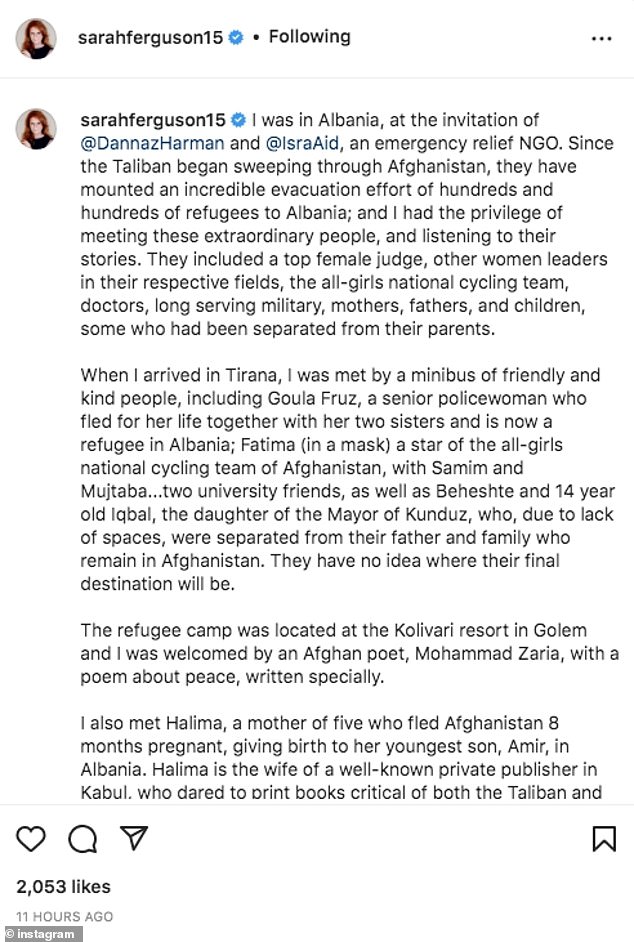 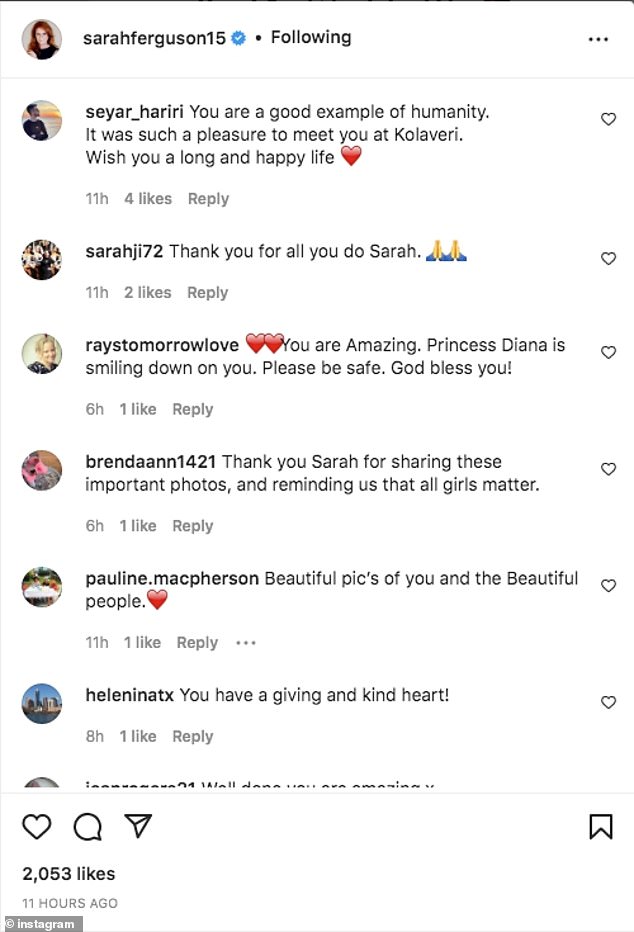 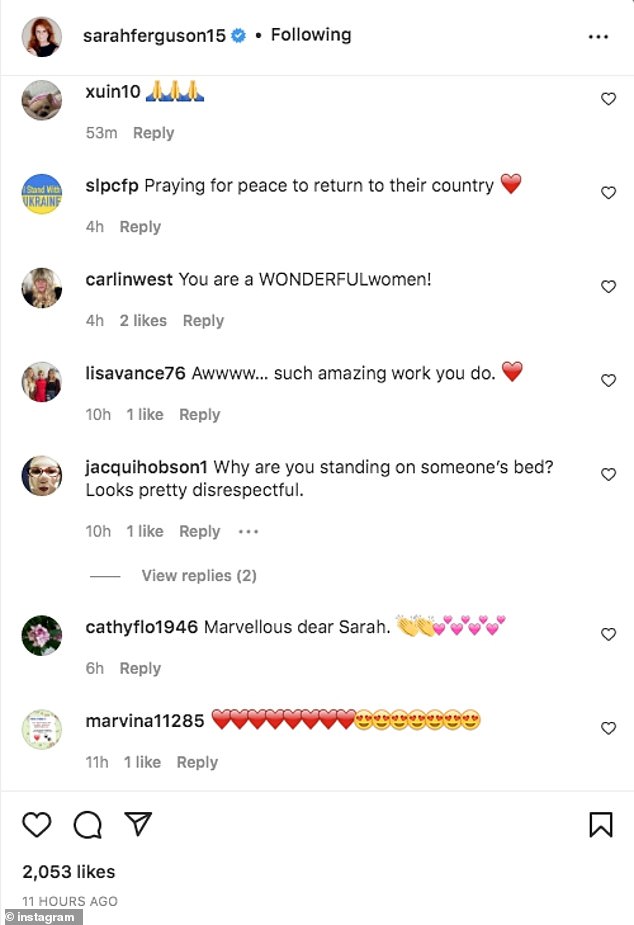 The charity who welcomed Sarah was IsraAID, an Israeli non-governmental organisation, partnering with local communities to support people affected by humanitarian crisis around the world.

Her fans were quick to comment on her posts with many posting heart emojis.

One said: ‘You are Amazing. Princess Diana is smiling down on you. Please be safe. God bless you!

And another writing: ‘You are a good example of humanity. It was such a pleasure to meet you at Kolaveri. Wish you a long and happy life.’

The visit comes a month after she visited a Polish monastery to meet families forced to flee war-torn Ukraine.

On social media she wrote at the time: ‘The invasion of Ukraine is heartbreaking to watch. So many families are being separated and displaced. I’m honoured to be welcomed to Poland today by [Mayor Rafał Kazimierz Trzaskowski] and meeting Ukrainian refugees. Poland has taken in at least 1.7m so far.’