As war continues to ravage Ukraine, Americans, particularly those who live paycheck to paycheck, are beginning to feel the financial squeeze on their food prices from the conflict half a world away.

It began with a rapid rise in gas prices. Now, with Russian oil banned in the United States and energy scarcity heightened globally, experts say shoppers can expect their grocery bills to rise in coming months – especially if Ukraine misses its wheat planting season.

"It comes an absolutely horrible time for American consumers because we're looking every day at inflation almost reaching 10%," Dan Varroney, a supply chain expert and founder of Potomac Core, told FOX Business. "Last month's figures were close to 8%. And that means that consumers, including those that are living paycheck to paycheck, are going to pay more for food."

Russia and Ukraine produce 25% of the global wheat supply, according to the Observatory for Economic Complexity. While neither of these countries export wheat to the U.S. directly, their absence from the global market is expected to strain supply and push prices higher. 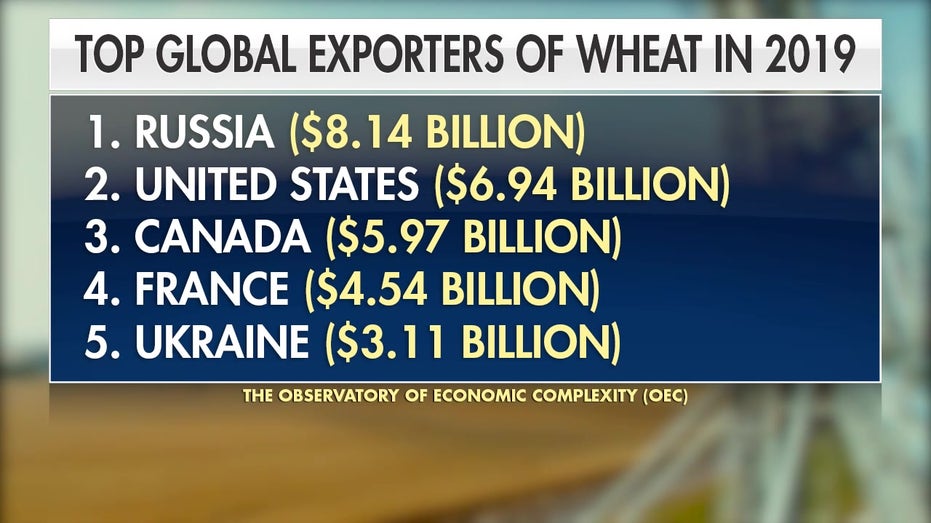 Observatory of Economic Complexity reports that 25% of world’s wheat comes from Russia and Ukraine.

All of this scarcity, from natural gas and crude oil to wheat and seed oil, will impact the cost of doing business for food manufacturers at home.

Varroney, who dove into global supply chain issues during the pandemic in his recent book, said that with the rising cost of inputs, some companies won’t have a choice but to raise the cost of their products for the end user. To him, it all comes down to the rising cost of energy at every step of the supply chain.

"Everything from getting food from the ground, to producing it, to storing it, to delivering, it all involves energy," Varroney said. "Natural gas is utilized to manufacture those foods. Then when you get past that? And you get into logistics, you've got a store, these food products, so there's gasoline to ship and there's electricity to store."

"It’s energy costs that are going to choke consumers at every level as food companies need to stay competitive."

One industry facing particular strain is the baking industry. With wheat as a primary ingredient and natural gas used for large-scale industrial ovens, bakers are grappling with rising costs of doing business.

Robb MacKie, the president and CEO of the American Bakers Association (ABA), said bread makers are starting to feel the pinch of higher demand on their inputs. 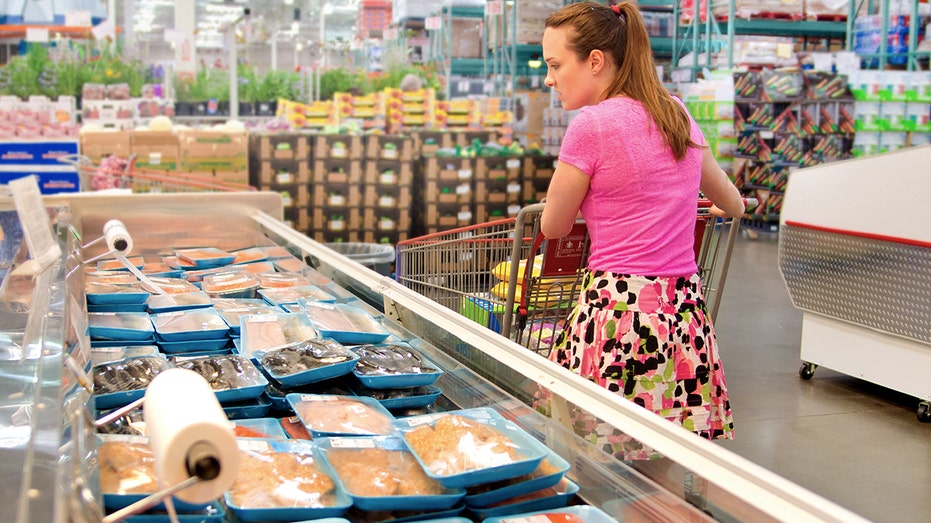 Food prices have already increased by nearly 8% for the previous 12 months as of February 2022. That’s the largest 12-month increase since 1981.

"A lot of ingredients come out of Ukraine, particularly wheat, oilseeds, barley and a number of other crops," MacKie told FOX Business. "The challenge is that that [region] is one of the top three wheat growing areas of the world. And if we're taking that out of production, which it looks like if the conflict goes much longer, that is going to happen. That's going to have a significant impact on the price of U.S. and Canadian wheat, which is what U.S. bakers primarily use."

MacKie’s organization highlighted several solutions the Biden administration could take to ease costs for producers and ultimately consumers. The ABA is currently lobbying the EPA to put a hold on implementing an increase of food oils into clean diesel products. MacKie said this would help keep food oils available for bakers, decreasing the cost of the input.

STOCKS DRIFT AS OIL CLIMBS TO $107

The ABA also proposed that the USDA open some conservation reserve lands that could be used to grow wheat and other crops during the global supply shortage. MacKie was careful to note that this proposal does not include the opening of highly sensitive wetland areas.

MacKie also joined a myriad industry and think tank voices asking the Biden administration to open up domestic sources of energy, like natural gas, gasoline and crude oil, which could help ease the energy inflation for producers and consumers alike. 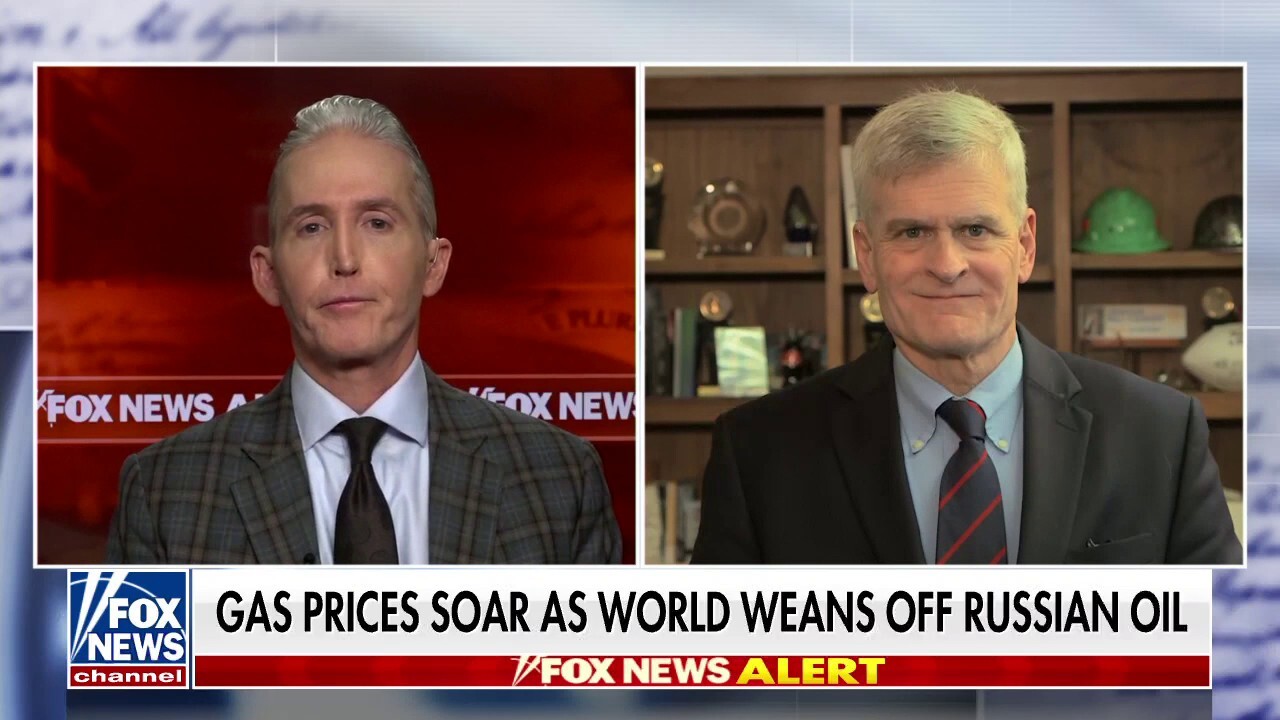 He continued: "You just cannot have this type of disruption in the supply chain and inflation on raw ingredients and the energy that we use and other things like packaging without there being some reciprocal cost benefit."

'DO THE RIGHT THING': HOW US, ALLIES UNITED TO PUNISH PUTIN

The Bureau of Labor Statistics found that food prices have already increased by nearly 8% for the previous 12 months as of February 2022. That’s the largest 12-month increase since 1981. 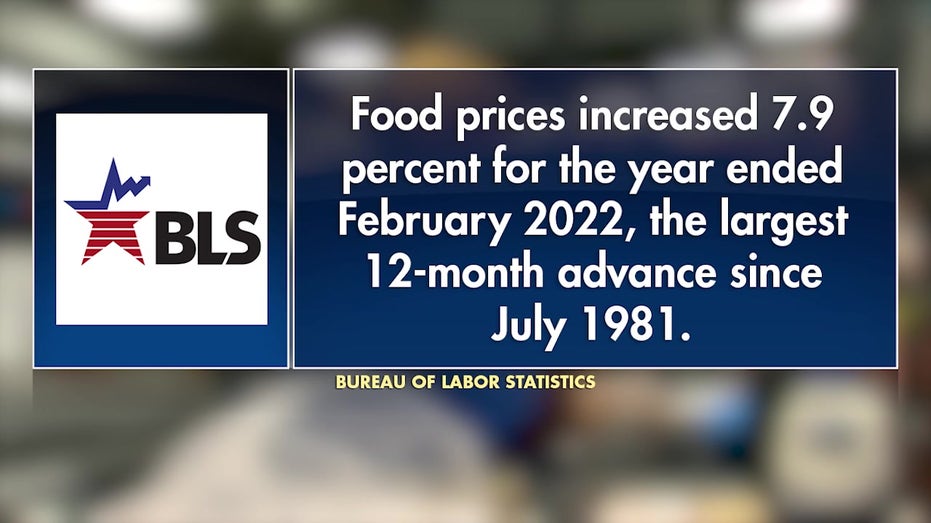 Bureau of Labor Statistics found the rise in food prices over the last year is highest in decades.

The shrinking supply of inputs is expected to threaten the American food production industry’s ability to manufacture food. Grocery shelves in America should remain stocked, albeit at higher prices.

"I think that the disruptions due to this war are only going to continue upward pressure on food prices," Caitlin Welsh, the director of the Global Food Security Program at the Center for Strategic and International Studies, told FOX Business. "I don't expect that to happen immediately in the U.S. It could take a couple of months for that to play out. And I don't think that it's going to happen to the same extent in the U.S. as it has in other countries that relied much more on imports to meet their food needs. But I do expect it to have an impact and it will last at least as long as the war lasts."

While countries in Europe and Africa are facing a direct threat to their wheat supplies due to the war in Ukraine, Welsh said it’s impossible to totally isolate the United States from global food and energy markets.

"Food markets are globalized so, to a certain extent, it's impossible to avoid the impacts of disruptions like this," Welsh said. "I think that these types of disruptions remind us the extent to which we, you know, the global economy and global agriculture trade is intertwined with the rest of the world."