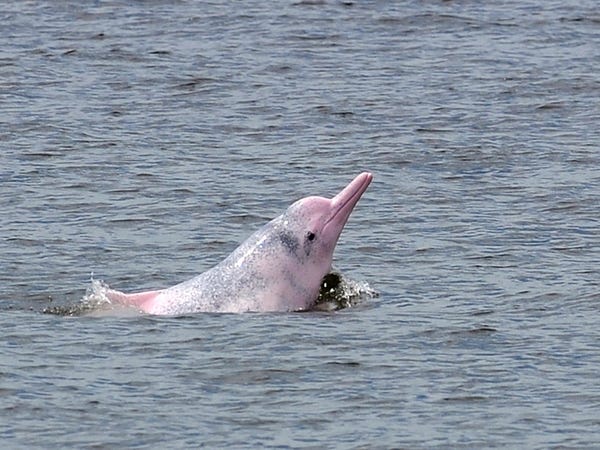 Animals appear to be reclaiming the earth — and that includes some seriously adorable pink dolphins in Hong Kong.

Since the coronavirus pandemic began and humans went further into isolation, animals around the globe have started to return to once-abandoned habitats. That included a lion pride lying in the middle of a road in South Africa, and black bears roaming in parts of Yosemite they haven't been seen in years. And now, it includes a large pod of Indo-Pacific humpback dolphins returning to the waters between Hong Kong and Macau.

According to The Guardian, the dolphins, also known as Chinese white dolphins and pink dolphins, started avoiding the area some time ago due to a large number of speed boats typically inhabiting the waters.

However, due to the pandemic and humans quarantining, the dolphins have returned, finding that they now have the waterways largely to themselves.

"I've been studying these dolphins since 1993 and I've never seen anything like this dramatic change before, and the only thing that changed is 200 ferries stopped traveling," Dr. Lindsay Porter, a senior research scientist with the University of St Andrews, told The Guardian.

According to Porter, dolphin numbers have risen by 30% in the waterway since March.

"From visual observations, the dolphins are spending much more time socializing, splashing around on the surface, quite a bit of foreplay, quite a bit of sex," she added. "Hong Kong dolphins normally live on the edges, they're stressed, they spend their time eating and resting. So to see them playing, to see them having a good time, that was really great to see."

To find out just how many dolphins returned, Porter and her team dropped recording stations under the surface in typical ferry lanes. Then, they listed in to hear the dolphin vocalizations and compared the new recordings to old ones taken before the pandemic.

Now, the team is hoping these findings will help change the way ferry companies operate in the water, including operating fewer trips to ensure the dolphins stay.

"I sometimes feel that we're studying the slow demise of this population, which can be really sad," Porter told Reuters.

And, as the World Wildlife Fund Hong Kong explained, the population of dolphins in the Pearl River Estuary is estimated to be around 2,500 individuals. However, it added, there's been a "worrisome decrease" in recent years. Hopefully, this research and the dolphin's latest return will spur more people into action to save them.

Related posts:
The Best Fitness Tracker — Apple Watch, Fitbit, Galaxy Fit and More
‘H Is for Happiness’ Review: Using Fuss to Fight Off a Funk
Popular News
Starting Walker Buehler worth Dodgers’ consideration for Game 6
27/10/2020
Man Utd wonderkid Ramon Calliste, called ‘the next Giggs’, now owns luxury watch business and makes £5m a year – The Sun
26/03/2020
Megan Thee Stallion Addresses Criticism Over Twerking: ‘I Love to Shake My A**’
26/03/2020
Police guard shops to stop coronavirus panic-buyers and enforce social distancing – The Sun
26/03/2020
Coronavirus: Good Morning Britain’s Dr Hilary reveals ‘game-changing’ self-testing kit
26/03/2020
Recent Posts
This website uses cookies to improve your user experience and to provide you with advertisements that are relevant to your interests. By continuing to browse the site you are agreeing to our use of cookies.Ok