THE NEW Premier League season is back underway with the world's richest league boasting a plethora of mega stars.

Such is the extent of English football's wealth, the top-flight's most valuable XI clocks in at a whopping £930MILLION. 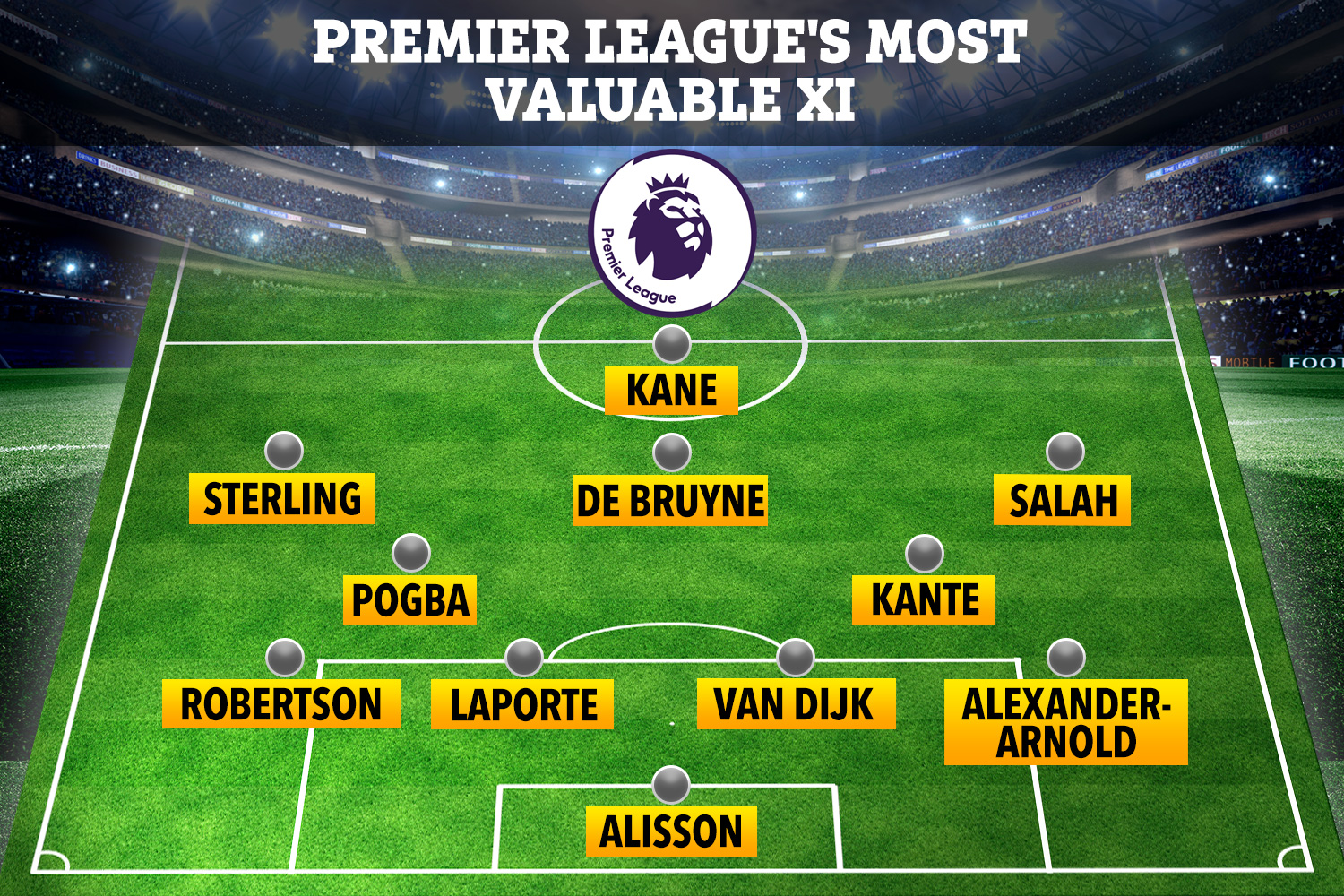 Clubs such as Liverpool, Manchester City and Chelsea have splashed the cash in recent years.

But they have also been able to create their own mega stars from scratch.

The division's most valuable line-up, according to Transfermarkt's calculations, places Alisson Becker in goal.

At £64m, the Brazilian beats Ederson and David De Gea to the honour after two impressive campaigns on Merseyside.

Liverpool boast three defenders across the four-man backline – just as they have in the last two PFA Team of the Year selections.

That leaves Harry Maguire, Davinson Sanchez and Ben Chilwell as the most valuable defenders knocking on the door of this XI.

N'Golo Kante, who turns 30 next year, remains among the most valuable midfielders despite a quiet year at Stamford Bridge.

Rated at £72m, the Frenchman is valued at the same price as compatriot Paul Pogba.

A tally of 20 assists and 13 goals in the 2019/20 Premier League has the £108m-rated Belgian ahead of Kai Havertz, Bruno Fernandes and Dele Alli.

Raheem Sterling beats Sadio Mane to appear on the left wing of this line-up and the England star is deemed the league's most valuable player at this time, worth £115.2m.

Liverpool do have Mohamed Salah (£108m) on the other flank, leaving Marcus Rashford, Bernardo Silva and Son Heung-min out.

Harry Kane may have started slowly in Tottenham's opening defeat to Everton but, at £108m, he is comfortably considered the league's most valuable striker.

Left out are a number of big names including Roberto Firmino, Timo Werner and Anthony Martial – with Arsenal star Pierre-Emerick Aubameyang back at just £50m.

Related posts:
Influencer distraught as malnourished puppy bought from Instagram dies
Verdy and Minions Tease New Collaboration That's Full of Personality
Popular News
5 Can’t-Miss Sale Picks at Everlane You Can Wear as an Entire Outfit
24/09/2020
Man Utd wonderkid Ramon Calliste, called ‘the next Giggs’, now owns luxury watch business and makes £5m a year – The Sun
26/03/2020
Megan Thee Stallion Addresses Criticism Over Twerking: ‘I Love to Shake My A**’
26/03/2020
Police guard shops to stop coronavirus panic-buyers and enforce social distancing – The Sun
26/03/2020
Coronavirus: Good Morning Britain’s Dr Hilary reveals ‘game-changing’ self-testing kit
26/03/2020
Recent Posts
This website uses cookies to improve your user experience and to provide you with advertisements that are relevant to your interests. By continuing to browse the site you are agreeing to our use of cookies.Ok