Young workers could assess job offers against underpayment cases in their area to guard against being ripped off using a dashboard researchers hope to develop with the help of Australia’s largest philanthropic foundation.

The Paul Ramsay Foundation, established by the late healthcare and media magnate, has contributed $500,000 to a University of Melbourne project launching on Tuesday that also aims to create a tool to predict which businesses are likely to be underpaying workers. 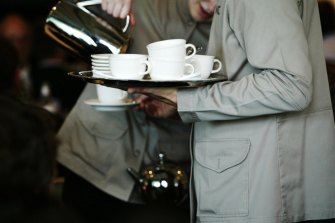 Industries including hospitality and retail have seen higher rates of pay problems.Credit:AFR

One of the project’s leaders, Timothy Kariotis, a lecturer at the university’s law school, hopes it will eventually be able to assess the risk of underpayment based on a worker’s age, visa status, industry and location.

But before it’s decided exactly what will be built, stage one of the project, which has been funded for two years, is to determine what data is available from unions, the sector’s regulator, public sources such as the Australian Bureau of Statistics and community legal centres.

“We don’t know what’s out there,” Mr Kariotis said, because while individual cases of underpayment sometimes receive intense media attention, there is no publicly available national database of claims and outcomes.

Underpayment in Australia is a growing problem. Last year alone, the Fair Work Ombudsman recovered a record $123 million for 25,583 workers from companies that inadvertently or intentionally underpaid their workers. While the bulk of the money recovered came from big companies reporting themselves, including the likes of IBM, Woolworths and Qantas, half of the 54 court claims the ombudsman filed in 2019-20 related to the fast-food, cafe and restaurant sector.

Council of Small Business Organisations of Australia chief executive Peter Strong said so many large employers would be on any list of underpayments that it would lose meaning.

“If they’re going to make a list up, then they need to make the system simpler to get the truly dishonest people, not the people who just can’t follow the rules,” he said.

Mr Kariotis said the project's purpose was not to name and shame businesses that had accidentally underpaid workers because they misunderstood pay rules but to inform workers, admitting balancing the two was a challenge.

In addition to the database and predictive tool, which could be used by government agencies and unions, Mr Kariotis and his colleagues hoped to create a portal for young people to inform them of their rights.

Jenny Tran, a lead analyst at the Paul Ramsay Foundation, said the project was one of a set of data-driven initiatives it was funding globally with data.org, a US-based non-profit that aims to connect data science with socially useful causes.

After the two-year set-up phase, Ms Tran said she hoped the project could form partnerships to help it operate “in perpetuity”.