Home » Lifestyle » Police are asking: Was this London law graduate killed by a hitman?

Police are asking: Was this London law graduate killed by a hitman?

Was this London law graduate slain by a hitman? Mayra Zulfiqar, 28, was shot in Pakistan last week after rejecting the advances of two privileged local men and as her anguished family point the finger of blame, police are probing contract killers

The day Mayra Zulfiqar graduated was one of the proudest of her life. That is clear from a photograph taken as she was about to receive her 2:1 law degree at the University of West London in 2019.

In the picture, Mayra, on stage in cap and gown, is clutching a mobile phone in her outstretched hand, proudly taking a selfie — a poignant moment that captured the hope and excitement of a young woman with so much to look forward to.

It was this picture she chose for her profile on the networking platform LinkedIn.

After graduating, Mayra won a place on a legal mentorship programme with a law firm in Reading. Career success beckoned for the 24-year-old, who spoke five languages. 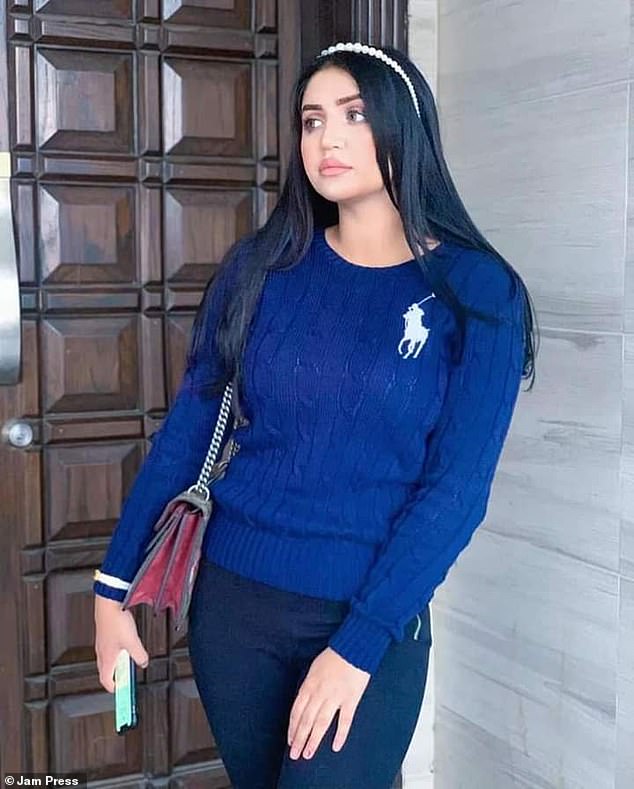 Mayra Zulfiqar, 24, (pictured) who lived in West London, was found dead on the upper floor of a house in Lahore last week

‘She was an excellent mentee,’ says Gracie Duncan, head of legal services at Duncan Blackett Law. ‘She was a lovely girl, very quietly spoken, very keen to learn and get into the profession.’

About two months ago, after the mentorship programme was postponed because of the pandemic, Mayra took an extended holiday to attend a cousin’s wedding in Pakistan. Last week, she was found dead on the upper floor of a house in one of the most expensive districts of Lahore, where she had been staying with a friend.

Mayra had been shot, becoming another statistic in a country ranked as one of the most dangerous in the world for women, where they are all too often victims of domestic violence, sexual abuse, acid attacks and honour killings, and where conviction rates are shockingly low.

So how did pretty, clever, popular Mayra Zulfiqar end up in such a scenario, thousands of miles away from her West London home?

Our inquiries in Lahore have pieced together the events that culminated in her murder.

They begin at the police station responsible for covering the upmarket neighbourhood where Mayra was staying. It was there, some time last month, that she gave a statement to the ‘station house officer’.

The statement — in Urdu, which Mayra spoke — has been translated into English for the Mail. 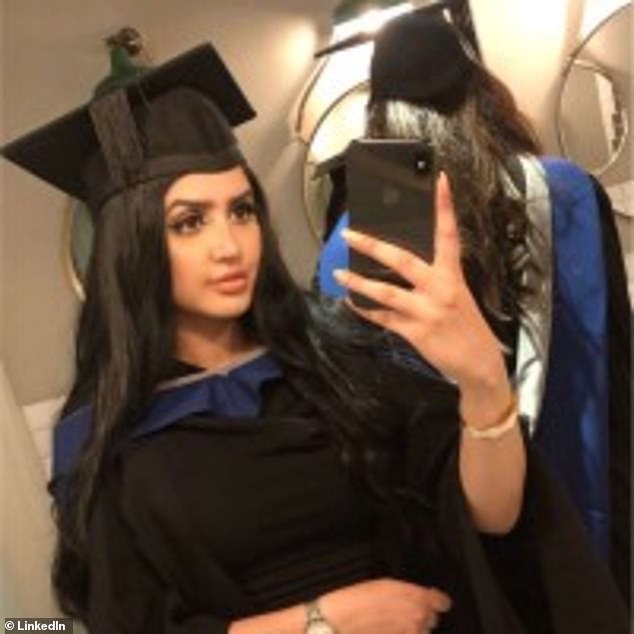 Mayra who spoke five languages, had won a place on a legal mentorship programme with a law firm in Reading. Pictured: Mayra graduating

She says that on April 17, at about 4.30am, a man she was acquainted with turned up at her residence, kidnapped her at gunpoint and drove her to another part of the city.

Along the way, she alleges, he tried to rape her but she managed to ‘push him away’, get out of the vehicle and call 15 — the police helpline — on her mobile phone. While she was speaking to the police, her attacker snatched the phone.

‘As soon as he snatched my mobile,’ she stated, ‘I started to shout and called for help. People started to come towards me.’

As bystanders gathered, her assailant panicked and fled the scene in his car. Before doing so, though, he warned her: ‘I will kill you.’

Mayra, who took a taxi back to her house after the ordeal, said it was not the first time ‘he’ had tried to enter her residence at gunpoint and appealed for police protection because she feared for her life.

‘Please take strong action against the accused and provide me with security,’ she pleaded. 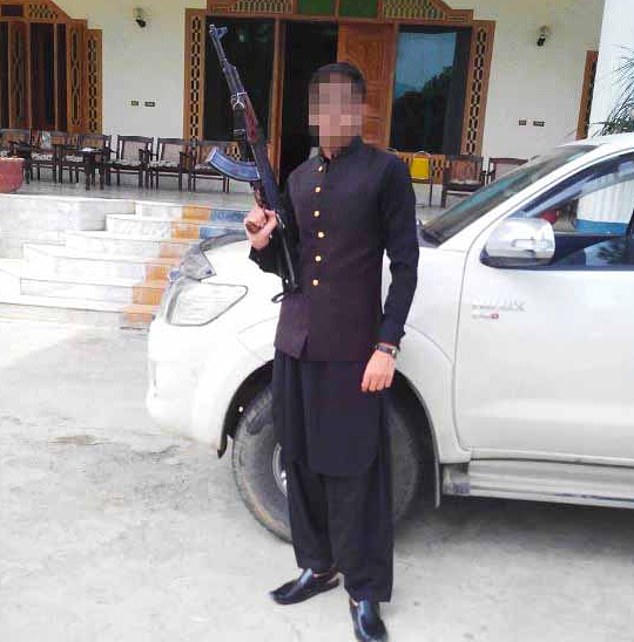 The man alleged to have kidnapped Mayra turned himself in on Friday and is in custody, meanwhile a second suspect is still in hiding. Pictured: one of the suspects

Two weeks later, she was found in a pool of blood in her room, with bullet wounds to her neck and arm.

The man alleged to have kidnapped her — for legal reasons we will call him Mr X — has emerged as one of the prime suspects.

The 28-year-old turned himself in on Friday and is in custody. A second suspect, aged 26, whom we will call Mr Y, is still in hiding.

The Area Assistant Superintendent told us Mr X has a criminal record but declined to give details.

Neither man is believed to have been at the scene of the crime; police are investigating whether a contract killer was hired to pull the trigger.

As to the motive for the crime, the main line of inquiry is that both Mr X and Mr Y had allegedly tried to force her to marry them but she had rejected their advances.

In Pakistan, a deeply patriarchal society, almost every week brings news of wives strangled, daughters shot and sisters drowned for a perceived slight to ‘honour’. 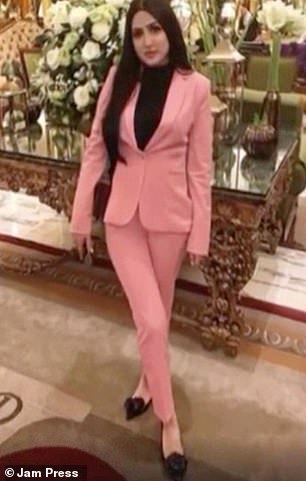 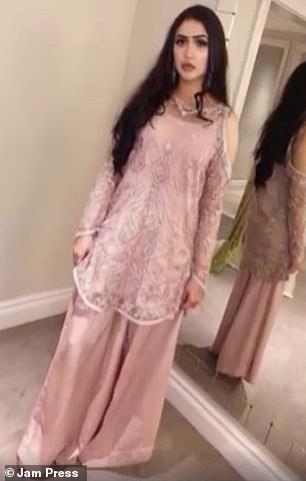 Mayra (pictured) who flew to Pakistan for a cousin’s wedding, hadn’t intended to stay long but remained to avoid the ten-day quarantine in Britain

Recently, there were nationwide protests demanding police reform after the Lahore Police chief made a public statement suggesting that a woman who had been gang-raped on a highway in Punjab was herself at fault because she should not have been travelling ‘without her husband’s permission’ on a motorway late at night.

And last month, prime minister Imran Khan caused outrage after he appeared to blame how some women dress for a rise in rape cases, saying: ‘This entire concept of purdah [covering up or segregating] is to avoid temptation. Not everyone has the willpower to avoid it.’

Violence against women, in other words, is commonplace.

Mayra, who flew to Pakistan for the wedding with her mother, never intended to stay quite so long.

Her parents run a market stall in Feltham, West London, and her mother returned home shortly before Pakistan was placed on the travel red list. But her daughter decided to remain to avoid the ten-day quarantine in Britain, hoping that Pakistan would soon be removed from the red list.

Mayra’s uncle Mohammad Nazeer, who lives in Lahore (pictured), was aware of the escalating harassment and danger she was facing

Her uncle, Mohammad Nazeer, lives in Lahore but she was staying with a friend in the top half of a two-storey house in the exclusive area called Defence, home to many retired army officers — hence the name — as well as politicians, bureaucrats and tycoons.

The district’s gentrification has, however, been accompanied by a rise in crime, and guards now patrol the homes of some of the wealthiest residents.

How Mayra came to be targeted by the wrong crowd in Lahore is not known, although she had reportedly begun partying with the sons and daughters of the city’s elite, a milieu in which guns, drugs and violence towards women are said to be prevalent.

In recent weeks, neighbours had witnessed several alarming incidents outside the house she shared with her friend. Once, men brandishing knives were seen threatening Mayra from the street. On another occasion, she was seen rushing inside the building in tears after being dropped off by a car.

‘I saw her being forced inside a car really late at night in front of the main gate,’ said one resident.

Mayra confided in her uncle about the escalating harassment and danger she was facing. 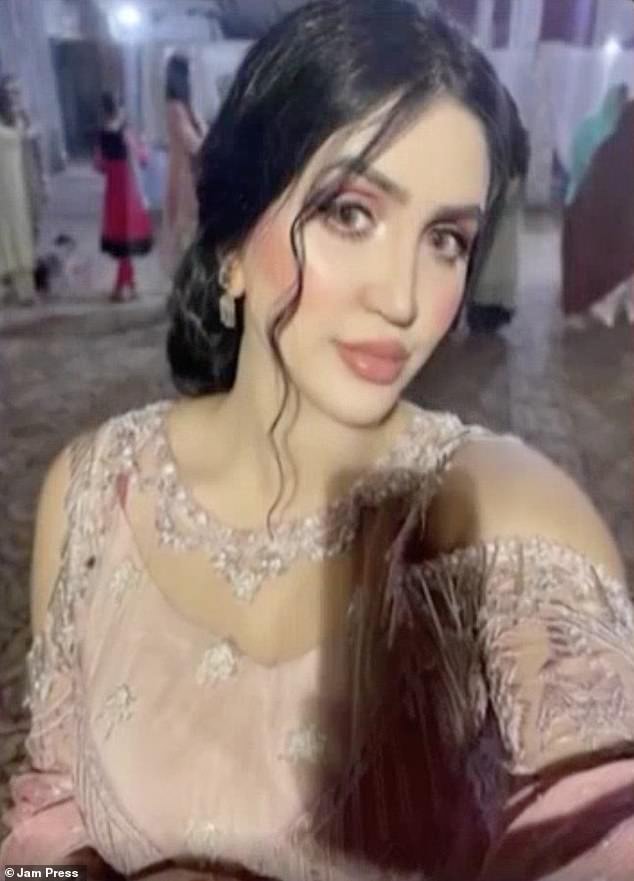 Mayra (pictured) enjoyed a meal out with friends before starting her daily Ramadan fast, the day before she was found dead

She told him all about Mr X, the ‘marriage proposal’ and the threats she claimed to have received from him and the other suspect, Mr Y, who are said to have competed with each other for her hand in marriage.

‘My niece Mayra visited my residence and told me she was feeling threatened by them,’ he said. ‘I comforted her.’ His detailed account is contained in what is known as a First Incident Report to police. Mr Nazeer said he planned to confront Mr X and his alleged accomplice but never got chance; he was too late to save her.

On Sunday evening of last week, devout Muslim Mayra enjoyed a meal out with friends before starting her daily Ramadan fast. Mayra was seen returning to her house in a red Mercedes at about 11pm. In the morning, a maid working in the house called the emergency services after discovering Mayra’s lifeless body in her room, with her mobile phone near by.

She had been shot once in the neck and once in the arm, and bruises were found on her right hand and left foot.

It was initially thought she might also have been strangled but this is now understood to have been ruled out.

Officers have been examining security video from buildings around the house. Mayra’s friend, who was living in the room next to hers, is assisting police in their investigation, which has received extensive press coverage in Lahore because Mayra was from Britain. ‘How cruel is this world?’ someone has posted on an Instagram page called Justice for Mayra. ‘If someone rejects you, it doesn’t mean you got [sic] the right to hurt people.’ 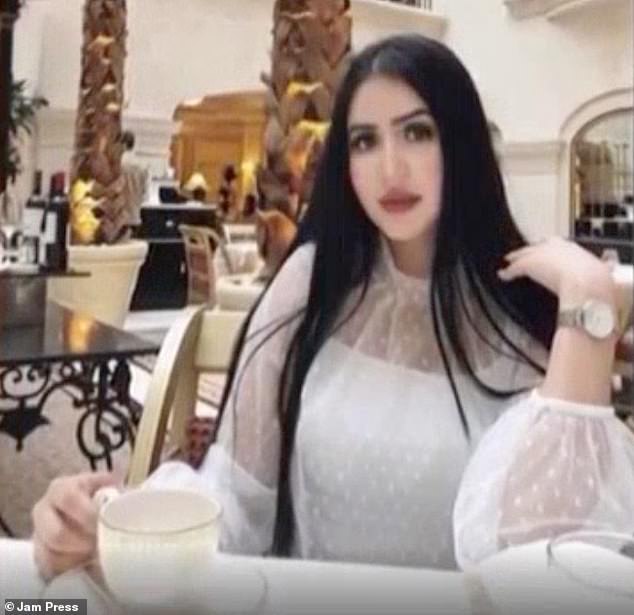 Mayra’s (pictured) parents are thought to have flown from London to Lahore to attend her funeral service, which was held within 24 hours of her death in keeping with Islamic tradition

Mayra had a masters degree in international and business law from the University of West London and had earlier obtained a bachelor of laws from Middlesex University, which involved studying for a time in Dubai. Khulood Sharif, who shared a dormitory with her on the Dubai campus, spoke to her recently.

‘She was excited about Eid, everything seemed normal,’ she said. ‘I still can’t believe this has happened to her. Mayra was lovely and full of fun. She was brilliant, intelligent and very kind and friendly. And she would always support her friends.’

On Wednesday, friends gathered outside Twickenham School, where Mayra was once a pupil, for a vigil in her honour. ‘She would have done anything for anyone,’ said one of the small crowd who turned up to lay flowers and candles.

Mayra’s parents are thought to have flown from London to Lahore to attend her funeral service, which was held within 24 hours of her death in keeping with Islamic tradition. Her three brothers remained at the family home.

Her family have set up a GoFundMe page and all donations will be made in Mayra’s name to charity. ‘We need justice for my beloved sister,’ her brother Faizan Muhammad wrote on the fundraising site. ‘My only sister was taken away from us at only the age of 24 years old. She still had the rest of her life to live [and] see the world and had big plans and dreams for the future.’

One of those dreams was to work as a commercial arbitrator and perhaps, eventually, even open her own law firm. No one who knew and loved Mayra Zulfiqar doubted she would succeed.