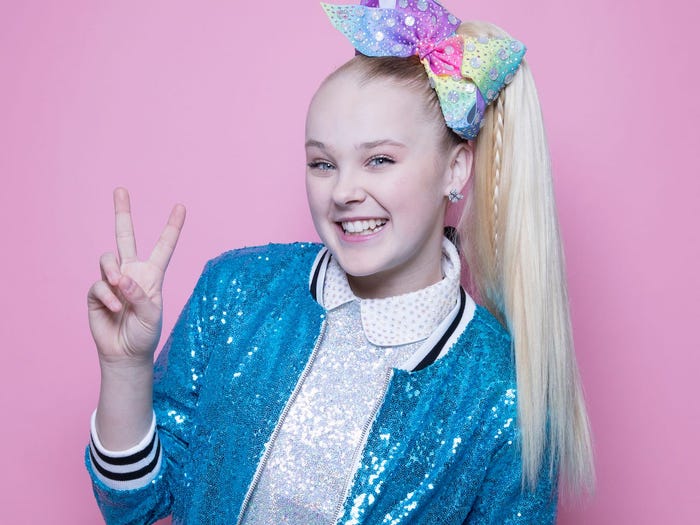 JoJo Siwa shines brighter than some celebrities who are twice her age.

The 17-year-old has a talent deal with Nickelodeon, more than 30 million TikTok followers, and a merchandise empire that's likely earned hundreds of millions of dollars.

But some people only want to talk about the 17-year-old's signature ponytail, giant hair bows, and sparkling outfits. And they talk even more about her on the rare occasions when she wears her hair down or opts for black clothes.

As a celebrity, Siwa is prone to public commentary — but the near-constant focus on her appearance could be sending the wrong message to her young fans.

Ponytails and hair bows are Siwa's thing. She wears them throughout her live performances, in social-media posts, and even sells accessories to help fans achieve her signature look.

That said, her hair has also become the basis for hurtful memes aimed at the young star. In 2018, many adults joked online that Siwa's hairline appeared to be receding. They shared timelines of Siwa's hair over the years and edited pictures that showed her with no hair at all — which Siwa herself later joked about on TikTok.

When Siwa temporarily ditched her ponytail and sparkly clothes as part of a TikTok challenge in April, people couldn't believe how different she looked with loose waves and a black T-shirt.

People also seemed to love Siwa's candor in various TikTok videos where she responded to people who tell her to "act her age." Not only have the videos received millions of views since they were posted, but people have also shared thousands of supportive comments in response.

Now, Siwa has seemingly grown more comfortable with sharing different aspects of her life and personality online. She showed off a new brown hairstyle in June and allowed YouTuber James Charles to give her a glamorous makeover in August.

Still, as Siwa said in a TikTok video from August, her style experiments don't mean she has plans to permanently change her look — no matter how many views and comments her transformation posts receive.

"Recently, I've shown myself looking different," Siwa wrote. "Not the classic rainbow, sparkles, and side ponytail with a JoJo bow. I've been hated on for YEARS for dressing 'young' and 'childish' — people think this is me 'changing.' LOL nope!!! I just love who I am! This is just me at night or in the morning!"

It's common for teenagers to experiment with their style

Erica Scharrer, the chair of the University of Massachusetts Amherst's Department of Communication, told Insider that teens often change their styles during their adolescent years because it's a period in which they're "closely tuned in to the ways others may be perceiving them."

It's also normal for teens to feel hesitant when straying from their typical look, according to Scharrer. Even Siwa herself described her makeover from Charles as "the scariest day" of her life.

"There can be comfort and security when teens express themselves in a way they see as consistent with their usual style or with other people's expectations, and risk and uncertainty when they go outside of those expressions," Scharrer said.

Of course, because Siwa is a celebrity, people are interested in her changing style.

Angie Corbo, a Widener University professor who teaches Communication and Gender, Women, and Sexuality Studies, told Insider that while humans are captivated by appearance, we're also fascinated by celebrity culture.

"It's what we notice and what we talk about," she said. "It's a shallow form of conversation as we limit ourselves to what we see on the surface."

Celebrities understand this and often accept that their position as stars "comes with the price of severe public criticism," Corbo said.

"This magnified attention can be used for self-promotion if the artist chooses to take advantage of it," she added. "I'm sure that Siwa recognizes this and continues to create more content for fans."

The appearance of celebrities has always been a point of discussion, but the rise of social media has "magnified this experience for young people," according to Scharrer. That said, it can be harmful when constant praise is aimed at young celebrities with even younger fans.

"Comment culture on social media can make it seem normal and acceptable to constantly judge women and girls for hairstyles, body size and shape, clothing, and other aspects of what they look like," Scharrer said. "The message received over and over again is that what girls and women look like is the most important aspect of what they bring to the world."

Corbo said that's especially true when stars face harsh criticism aimed at their hair, clothes, and other aspects of their appearance.

"The critical responses posted on social media extend beyond the celebrity," Corbo told Insider. "Young girls are susceptible to this noise. They internalize the attention to appearance and may be fearful of judgment. It is a paralyzing peer pressure that burdens our youth and young adults."

According to Corbo, society often holds celebrities to "higher standards than we have for ourselves," which can be "unrealistic and unhealthy" for them to maintain. Look no further than Miley Cyrus and Noah Cyrus, who both faced heavy criticism when they began to shed their adolescent images.

"We meet a performer at a young age and expect them to hold on to the youthful role," Corbo said. "If they are successful early in life, audiences often have a difficult time allowing them to mature."

"It will be interesting to see if the public will welcome an adult Siwa," Corbo said. "She may need to take a break from her role before a rebrand."

Still, the professor noted that Siwa has gradually shown her changing style to fans in the past, and that "commitment to not changing entirely" will likely "keep her fans interested in what they have come to love about her."

Siwa's style is unique, but it's far from the most interesting thing about her

Siwa has accomplished a great deal so far. In 2014, she starred on Lifetime's "Dance Moms" as an outspoken 11-year-old with her heart set on success. And though she wasn't accepted by all her castmates, and Abby Lee Miller famously made her cry, Siwa didn't let herself get discouraged.

Instead, she began posting YouTube videos, released a music video that's been viewed more than 929 million times, and later teamed up with Caryn Sterling, the owner of a small jewelry brand who wanted to try her hand at managing talent. The latter decision only furthered her success, as Sterling guided Siwa in creating her merchandise empire, signing with Nickelodeon, and garnering millions of fans.

Today, many parents love having such a great role model for their children. Underneath YouTube videos featuring the 17-year-old, you can often find comments like this one that reads: "I'm literally a 25-year-old mom, and I'm proud of how articulate and thoughtful this kid is — someone I actually want my daughters to listen to. Any grown adults 'hating' her are just twisted."

And there's no doubt that Siwa's appearance plays a part in her success, as both parents and children love her bright clothes and dazzling accessories. Her unique clothes and makeup looks also encourage children to embrace artistry and be themselves — as Siwa didn't change her appearance when she was mocked online.

"That's a healthy message to send to young people, for sure," Scharrer said. "Siwa seems particularly aware of the tender age of many of her fans, and her conscious decisions to look out for their interests is admirable."

And when Siwa dresses down, she just becomes more relatable to her fans. As Scharrer told Insider, Siwa's audience is likely aware that there's a "culture of judging people for their appearance," so it makes sense that fans would "genuinely appreciate the message of being true to yourself" that Siwa shares when she swaps her sparkles for sweats.

Still, Siwa's most impressive feat isn't that she can transform from a sparkling entertainment mogul into an everyday teen in social-media videos. Instead, it's that in her short career, Siwa has stood her ground, paved her own path, and become one of the most successful — and positive — role models for young children in a world that would rather focus on her hair.