Just as he has been for OnePlus smartphone launches past, teenage tipster Ishan Agarwal has been at the centre of OnePlus 8 leaks. In fact, he has flooded the internet with OnePlus 8 details in the last few weeks, but the latest may be the most substantial so far.

Agarwal has taken to Twitter and posted what he claims are the specs for both the OnePlus 8 Pro and OnePlus 8. Safe to say, both phones could boast some seriously impressive hardware.

As you’d expect, the OnePlus 8 Pro is anticipated to come with a larger display, battery and more capable camera system than its OnePlus 8 brother. However, by far the most interesting spec listed is the inclusion of support for 30W wireless charging which, if true, would make the OnePlus 8 Pro the first and only OnePlus handset with the ability to charge without the firm’s signature red cable.

Plus, it seems the OnePlus 8 Pro will also come with an official IP rating against dust and water, another first for OnePlus. 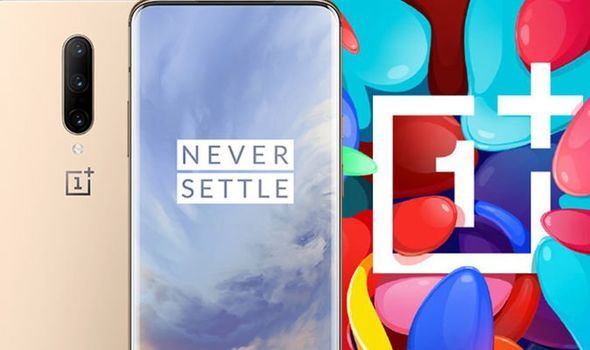 It’s worth noting recent OnePlus devices have actually featured waterproofing technologies – remember when OnePlus showed a video of the OnePlus 7 Pro being dunked into a bucket of water? That said, they’ve never featured an official IP certification of any kind.

Here are the full specs for the OnePlus 8 Pro and OnePlus 8 as listed by Ishan Agarwal: 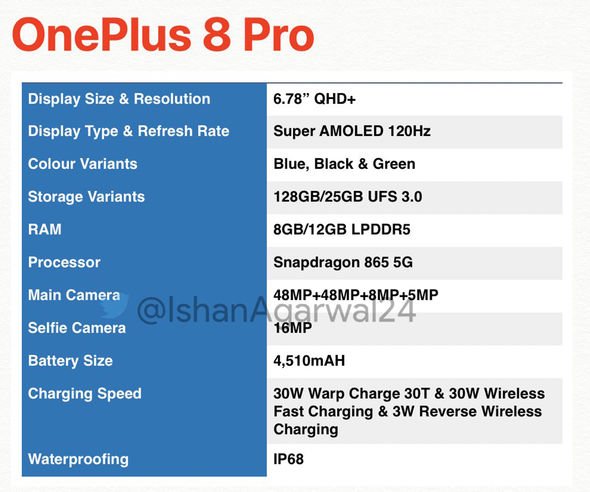 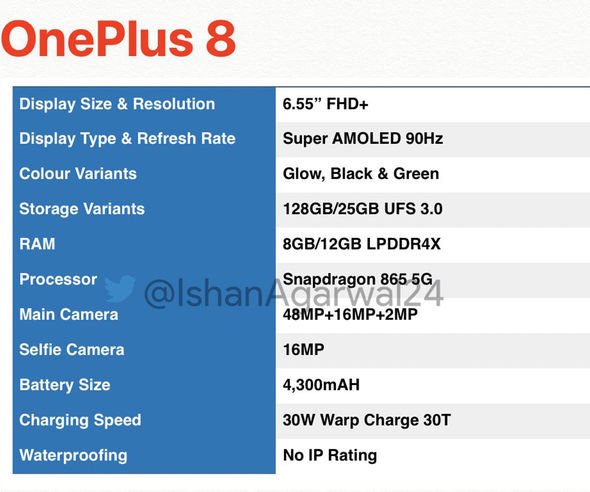 The display specs for the OnePlus 8 Pro aren’t particularly surprising, especially as OnePlus has already made a big song and dance about its new 120Hz display technology. The increased refresh rate from last year’s OnePlus 7 Pro and OnePlus 7T series means using your fingers to swipe through the firm’s slick OxygenOS Android skin should feel even smoother.

Unfortunately, no pricing details for the new OnePlus 8 series were detailed by Agarwal.

We already have a pretty good idea of what each new OnePlus 8 model will look like thanks to alleged renders from OnLeaks – who has an astonishingly good track record.

It seems each OnePlus 8 handset will ditch a motorised pop-up selfie camera system in favour of a hole-punch cutout within its display à la Galaxy S10.