More than one in 10 research positions at Australian universities are predicted to disappear by 2024 as revenue from overseas students dries up, and prestigious Group of Eight institutions are tipped to lose the most resources. 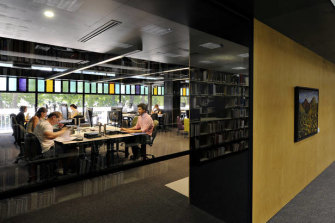 Fees from overseas students cross-subsidise just over half the research work in Australian universities. However, the pandemic will cost the higher education sector about $16 billion in the next few years, according to sector body Universities Australia.

New modelling by the University of Melbourne’s Centre for the Study of Higher Education predicts universities will collectively lose between $6.4 billion and $7.6 billion in research income between this year and 2024.

The report indicates lost income from full-fee paying overseas students will force them to shed between 5100 and 6100 researcher positions, including staff and postgraduate students.

"While all Australian universities will be impacted, 13 universities are identified as the most vulnerable regarding their future capacity to support research at current levels," the paper, released on Monday, states. "This is due to the size of their research effort and international student programs."

The paper notes that investment in research has helped Australian universities to steadily climb international higher education rankings in recent years, but those gains were likely to come under strain.

"Consequently, university international research reputations are significantly at risk because of the research revenue shortfalls," the paper states. "Reputational damage will be to the national detriment."

"Universities spend about 60 per cent of the funds that they commit to research on postgraduate scholarships and on salaries, so, clearly, if you have a significant shortfall, you will inevitably have to lose jobs," he said.

About 11 per cent of research positions would have to be sacrificed, Professor Larkins said.

"The other thing is, it slows down discovery and new knowledge and industry, of course, feeds on that."

Of the 13, Deakin, Macquarie and UTS are identified as at extremely high risk of losing significant research capacity.

These three universities committed more money to support their research in 2018 than they had secured through grants and government funding, the modelling found.

Deakin and UTS each committed 134 per cent of the discretionary income they received that year to support research, while Macquarie committed 120 per cent.

"This is a remarkable and concerning result," the paper states. "With the expected losses in discretionary income over the next five years, their risk of a significant loss in research momentum without effective mitigation strategies … is extremely high."

Nationally, universities committed 51 per cent of discretionary income towards research on average.

Deakin vice-chancellor Iain Martin said the university would continue to balance its investments in education and research.

"Whilst the challenges identified are real, it is important to note that the data used in this analysis are two years old, and the position for Deakin is now materially different," Professor Martin said.

"We have made difficult decisions this year, but these have been driven by the need to ensure that we can continue to invest in our shared future over the next three to five years."

Related posts:
Arsenal star Lucas Torreira in talks to join Atletico Madrid on loan transfer in huge Gunner boost to sign Thomas Partey
Former lighthouse with eight bedrooms and swimming pool goes on sale for £1m
Popular News
Chelsea Houska Threatens to Take Sole Custody of Daughter Aubree: Adam Lind Sucks, and So Do His Parents!
21/10/2020
Man Utd wonderkid Ramon Calliste, called ‘the next Giggs’, now owns luxury watch business and makes £5m a year – The Sun
26/03/2020
Megan Thee Stallion Addresses Criticism Over Twerking: ‘I Love to Shake My A**’
26/03/2020
Police guard shops to stop coronavirus panic-buyers and enforce social distancing – The Sun
26/03/2020
Coronavirus: Good Morning Britain’s Dr Hilary reveals ‘game-changing’ self-testing kit
26/03/2020
Recent Posts
This website uses cookies to improve your user experience and to provide you with advertisements that are relevant to your interests. By continuing to browse the site you are agreeing to our use of cookies.Ok