A settlement reached between O.J. Simpson and The Cosmopolitan of Las Vegas must go to the family of Ron Goldman, the man who was murdered along with Simpson’s ex-wife in Los Angeles in 1994, local outlets have reported, citing court documents.

Simpson settled a defamation suit with the luxury resort casino and hotel in April. The former NFL star had filed a lawsuit against the hotel claiming his reputation was damaged following his removal from the property following an alleged drunken incident at a hotel bar in November 2017. 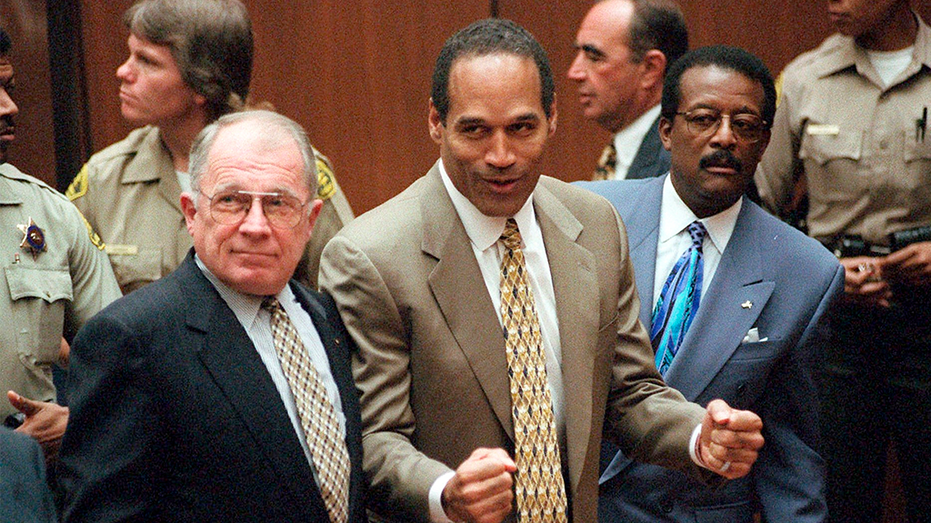 FILE: O.J. Simpson reacts as he is found not guilty in the death of his ex-wife Nicole Brown Simpson and her friend Ron Goldman in Los Angeles, as defense attorneys F. Lee Bailey, left, and Johnnie L. Cochran Jr., stand with him.  (Los Angeles Daily News via AP)

Hotel staff told TMZ sports that Simpson had become angry with employees and the incident resulted in broken glass. Simpson would file the suit in 2019 alleging the hotel employees defamed him.

The hotel had argued the football hall of famer could not be defamed because his reputation had already been tarnished with the infamous criminal and civil trials in the 1994 deaths of his ex-wife Nicole Brown Simpson and her friend Ron Goldman as well as Simpson’s imprisonment in Nevada over a 2007 armed robbery case.

Simpson was found liable for their deaths and ordered to pay more than $33 million in damages to the victims’ families. That judgment was later increased to more than $55 million – of which only about $133,000 has been paid, according to a Nevada court filing obtained by KTNV, the ABC-affiliated TV station in Las Vegas.

The settlement was reached between Simpson and The Cosmopolitan, but according to that court filing, it was "assigned" to Goldman’s family and ordered "immediately turned over to Goldman’s counsel, Larson A. Welsh, Esq," earlier this month, KLAS, the CBS-affiliated TV station in the locale known as "Sin City." reported.

Simpson's attorney, Malcolm LaVergne, has denied the reports, saying that the settlement between Simpson and the hotel has been resolved.

CLICK HERE TO READ FOX BUSINESS ON THE GO

Simpson has been living in a Las Vegas golf community after serving nine years in a Nevada prison for leading five men in a bid to retrieve some memorabilia from two collectibles dealers in a Las Vegas hotel room. His parole is due to end in 2022.

Just as the pandemic hit in April of 2019, the Wall Street Journal reported that The Blackstone Group was "exploring a sale of the Cosmopolitan hotel and casino." The investment firm purchased the property in 2014 for $1.7 billion.