People who wanted to sell their homes to avoid loud and dusty excavation on the North East Link say they are now "stuck", with work set to start this week amid tightening lockdown rules.

The Andrews government is forging ahead with construction works on its major transport projects, including the $15.8 billion North East Link, despite rolling out stricter measures to stop the spread of the coronavirus. 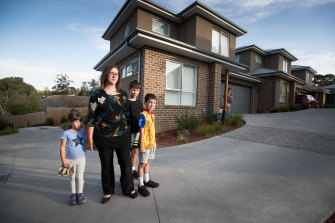 Katie George with her children outside her home on Borlase Street last year.Credit:Jason South

From Wednesday, parkland in Borlase Street, Yallambie, will become a construction site as workers rip up the road and footpath to relocate gas, water, power and sewage to create the launch site for the project's massive tunnel-boring machines.

Site investigations are already under way but construction will ramp up at the reserve this week, just metres away from homes.

Borlase Street residents who had planned to move out temporarily or sell their homes to the government fear this will make their situation intolerable.

Anisha Ramakrishnan had planned to avoid the construction works by moving her family into a rental property, but this is now on hold amid the tightening social-isolation rules.

"It's kind of like we're stuck here with nowhere to go," she said.

"We don't have time to relocate in the middle of this, we really cannot go and see other houses, it's not the right thing to do with so many restrictions in place.

"It's quite devastating to be in such a situation when you really don't have much of a choice."

Two years ago, work at the reserve connected with a nearby level crossing removal caused sleepless nights for six months with dust so bad that residents kept windows shut and dried their washing indoors. 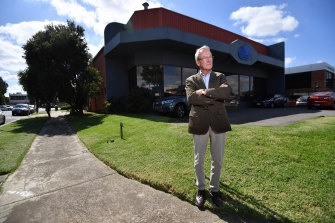 David Monk says the coronavirus crisis has added to the stress caused by the imminent acquisition of his property.Credit:Joe Armao

Plastic manufacturer David Monk said businesses such as his were already battling with uncertainty over their future, which was now compounded by strict containment measures.

"We are in a unique position that we have been on edge and living with a level of uncertainty for the past nearly three years and this COVID-19 chucks another layer of uncertainty," he said.

"There is no point in any of us looking for a new premises until we have certainty."

Mr Elliot said it was the organisation's preference to minimise construction work impacts so people stayed at home.

But the government would help those who still wanted to relocate.

“Our priority is to make sure that the residents in Borlase Street who want to relocate can do so in a safe and supported way, before any intrusive works start," Mr Elliot said.

The 11-kilometre toll road, linking the M80 at Greensborough and the Eastern Freeway at Bulleen, is set to remove 12,000 vehicles from congested Rosanna Road each day and slash travel times between the north and south-east of the city by up to 35 minutes.

It will create 10,000 jobs through construction.